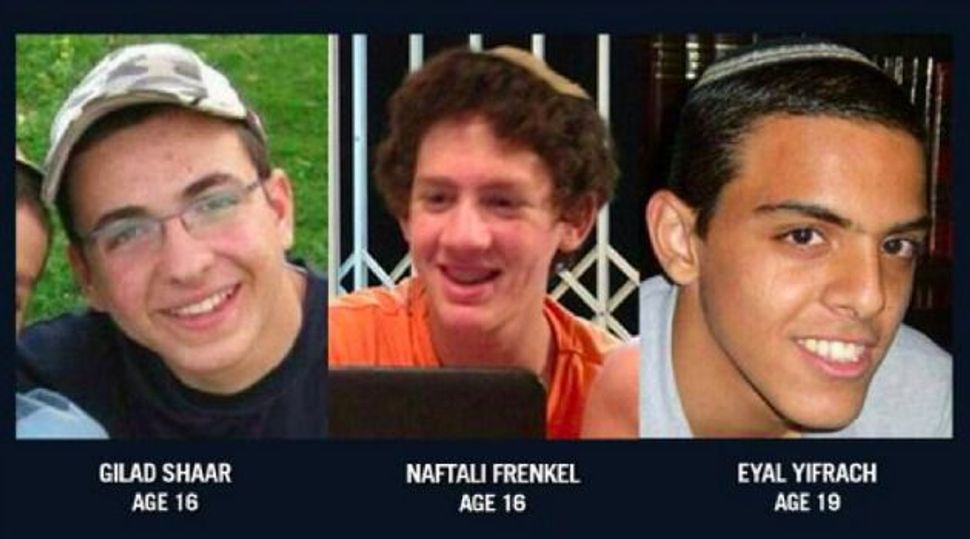 (JTA) — The Reform movement posted a prayer. Chabad asked followers to pledge to do a mitzvah. The Jewish Federations of North America set up a Web page to express solidarity.

The disappearance of three Israeli teens in the West Bank last week is being taken as a call to action uniting many disparate elements of the American Jewish community.

At synagogues across America spanning the major denominations, Jews recited psalms or offered special prayers for the safe return of the teens, echoing a prayer rally held Sunday at the Western Wall in Jerusalem. On Monday, demonstrators held a rally in New York opposite the Israeli Consulate.

“I have a 16-year-old myself,” Steven Levine of Brooklyn told JTA at the rally. “It could have been any of us. They’re my brothers, they’re my children. That’s why I’m here.”

The missing teens – Gilad Shaar and Naftali Frenkel, both 16, and Eyal Yifrach, 19 – were last seen at a hitchhiking post near Gush Etzion, a Jewish settlement bloc in the West Bank. Shaar and Frenkel were on their way home from Mekor Chaim, an in-residence yeshiva high school in Kfar Etzion run by Rabbi Adin Steinsaltz. Yifrach, who met up with them at the hitchhiking post, was on his way home from a pre-army yeshiva program near Hebron.

Israeli Prime Minister Benjamin Netanyahu has blamed Hamas for kidnapping the teens and said he was holding the Palestinian Authority responsible.

Among American Jews, the focus has been on supporting the teens’ families, largely through prayer.

Chavie Kahn, the school parent and board member who organized the event, praised Rachel Frenkel, the mother of one of the missing teens, for the grace she has displayed under the international media spotlight as well as for her pioneering work as a “yoetzet halachah” – an Orthodox Jewish religious adviser.

Kahn said a video of the service would be shared with the teens’ families and hoped it would provide them with some measure of comfort and strength.

The Orthodox Union organized a round-the-clock “virtual vigil” for members of O.U.-affiliated programs to sign up for 30-minute slots to learn Torah, pray and perform mitzvahs to merit the safe return of the boys.

The Conservative movement’s Rabbinical Assembly released a prayer for the welfare of the teens composed by Rabbi Tamar Elad Appelbaum of Jerusalem’s Zion congregation.

“Do all that must be done so that relief, rescue, and life may be the lot of the young men, Ya’akov Naftali ben Rahel (Frenkel), Gil-ad Micha’el ben Bat-Galim (Shaar) and Eyal ben Iris Teshura (Yifrach),” the prayer says. “Act on their behalf, Lord, take up their cause without delay, and may You grant them life and blessing forevermore.”

Meanwhile, a social media campaign with the hashtag #BringBackOurBoys has gone viral, generating voluminous tweets and shares. The effort was inspired by the #BringBackOurGirls online campaign demanding the return of the some 200 Nigerian schoolgirls kidnapped in April by the Islamist terrorist group Boko Haram.

American Jews mobilized during the long captivity of Gilad Shalit, an Israeli soldier who was held by Hamas for more than five years after a Palestinian attack on his post along the Israel-Gaza border in June 2006.

In Shalit’s case, it became clear relatively early on that he was alive, and the Israeli government became the target of a public campaign to negotiate with Hamas for his release. The government eventually cut a deal, agreeing to release more than 1,000 Palestinian prisoners in exchange for Shalit’s freedom in October 2011.

In the case of the teens, at this point it’s not clear who kidnapped them or whether they are still alive.

Some commentators have suggested that Israeli policies are to blame for the kidnapping, noting that the teens studied at a yeshiva in a settlement. But Rabbi Michael Lerner, editor of the left-wing Tikkun magazine, condemned efforts to rationalize the kidnapping.

“We reject any attempt to imply that somehow these acts are understandable given the oppressive conditions faced by the perpetrators,” he wrote.

The teens, Lerner continued, “were not the perpetrators or the creators of the Occupation. They were children doing what their parents had brought them up to do and to be.”