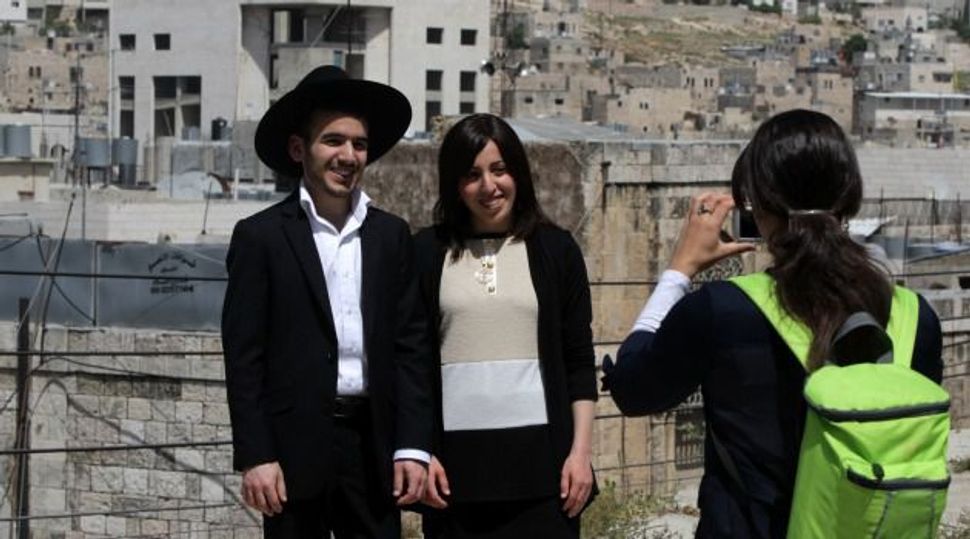 Smile, You Got a Subsidy: Jewish settlers pose for pictures in the Palestinian town of Hebron. Israeli lawmakers are increasingly questioning th high cost of Jewish settlements on the West Bank. Image by getty images

(Reuters) — Israeli lawmakers are pressing Prime Minister Benjamin Netanyahu to lift what they call unjustified secrecy over opaque – and rising – funding for settlements on West Bank land Palestinians want for a state.

Unpublished official data reviewed by Reuters suggests state spending on settlers rose by a third after Netanyahu took office in 2009 and critics complain that the cost of settlements has long remained hidden in thickets of budgetary convolution.

Condemned by U.S. and European allies as illegal obstacles to peace with the Palestinians, settlements face a new wave of hostility within Israel – from taxpayers who suspect the state of handing on their money by the back door to a vocal minority.

“I’m a member of the finance committee and I’m telling you, I’m being conned,” said Elazar Stern, who sits in parliament for chief peace negotiator Tzipi Livni’s liberal Hatnuah party.

“Funds are hidden. Clauses are lumped together so that you vote on an item that is justified and then they slip it in.”

Netanyahu dropped his objection to a Palestinian state after becoming prime minister in 2009 but has defended an expansion of Israeli building in the West Bank and rejects the Palestinian view that it shows he is not serious about a two-state solution.

While the rise in funding underlines Netanyahu’s commitment to keeping some occupied land in any deal with the Palestinians, their cost has become a target of middle-class discontent on the economy that drove street protests in 2011 and last year sent new lawmakers to parliament to challenge the right-wing premier.

The drive for transparency, which has support from some of those newly elected critics whom Netanyahu has had to bring into coalition, saw the Supreme Court last week order the Finance Ministry to offer changes in rules for oversight of the budget.

The pro-settler chair of the parliamentary finance committee defended the existing process. But a senior government official told Reuters there was some obfuscation – not to misuse tax revenues but to frustrate foreign critics of the settlements:

“We are discreet about the figures,” he conceded, “Since there are those who exaggerate and use them against Israel.”

There is little prospect of any government giving up major settlement blocs; many who grumble at the cost, or see hardline settlers as dangerous religious zealots, still support the idea of Israelis living in the big, suburban settlements that act as buffers between Jerusalem and the Arab cities of the West Bank.

So the dispute may not change the familiar calculus that saw U.S.-brokered talks with the Palestinians break down again in April amid recriminations over the expansion of big settlements.

But the row over money has highlighted divisions in Israeli public opinion on the issue and has put settler leaders on the defensive, fearing that especially some more controversial and remote hilltop outposts could be choked of funds.

Netanyahu’s own finance minister Yair Lapid, a TV anchorman whose new party broke into parliament last year on a platform of cutting government waste, has led criticism of such spending. But support for the settlers among opposition parties has so far outweighed such critics within the fractious coalition cabinet.

Agreeing on the total fiscal cost of the settlements, which are home to more than half a million people or some 6 percent of Israelis, is all but impossible, not least since views differ on how they contribute to the costs and benefits of the military occupation of lands seized in the 1967 war against Arab armies.

But a portion of state spending on the settlers is added up by the government’s Central Bureau of Statistics (CBS). It includes the cost of building homes and other facilities, special hardship subsidies and providing energy, communications, roads and other infrastructure not needed by the military.

This data is compiled for the United States under the terms of a 2003 agreement by which Washington helps Israel with loan guarantees but reserves the right to reduce its pledges by the amount that Israel spends on settlements. In total, $1.1 billion was deducted in 2003 and 2005 from $9 billion of guarantees.

The first three quarters of 2013 showed a steady trend.

Asked about the rise in settlement spending, U.S. State Department spokesman Edgar Vazquez declined comment on the data but noted: “We view settlements as illegitimate. We have consistently said that settlement activity is unhelpful and counterproductive to achieving a two-state outcome.”

They do not include the likes of health, education and welfare spending on the 350,000 West Bank settlers included in the statistics. The CBS data include 19,000 Israelis in the Golan Heights annexed from Syria and, until 2005, 9,000 settlers in the Gaza Strip. They exclude 200,000 Israelis living on land annexed and incorporated into Israel’s Jerusalem municipality.

Some 2.7 million Palestinians live in the West Bank.

Using another measure, municipal financial reports show that in 2012 the central government contributed 3,630 shekels per head of population per year to support settler towns, two thirds more than the national average of 2,181 shekels per person.

“When people find out that there are those who get much, much more because they live in the territories and because a few politicians want to attract people there in order to paralyze the peace process, then they get upset,” said Stav Shaffir, who was elected to parliament last year for the Labor opposition.

“This upsets everyone, not just left-wingers. We all pay taxes,” said Shaffir. She challenged the rules for reviewing the budget in the Supreme Court and won a judgment last week giving the Finance Ministry and parliament’s finance committee three months to agree to changes that have yet to be worked out.

Shaffir, a member of the finance committee and a leader of street demonstrations over living costs that swept Israel in 2011, said her own parliamentary committee had been approving spending without having all the details of where it was going.

“The way to hide it is to transfer a lot of funds … quietly through the finance committee, where for the most part the lawmakers are not familiar with what is on the table,” she said, echoing comments by pro-government fellow member Stern.

Moshe Gafni, a former chairman of the committee from a religious party now in opposition, said settlers received money “through all kind of clauses that you can’t really follow”.

But his successor, Nissan Slomiansky from the pro-settler Jewish Home bloc that is part of Netanyahu’s coalition, flatly denied the process was anything but fully transparent and denied the settlements were being granted undue privileges.

“What do you get in Judea and Samaria?” he said, using the Biblical name for the West Bank. “Just like any other place, any other town, that the government decided to establish.”

One reason for extra funding is that 90 of 120 settlements qualify for special benefits to compensate for being located close to hostile neighbors – but these are also granted to towns inside Israel, for example near the Gaza Strip or Lebanon.

Gafni, however, said he had found other ways to secure state funds for settler communities when he chaired the committee.

“I would go to the Defense Ministry and say, ‘help them, it is a matter of security, help them with paving a road’. Things like that,” Gafni said. “You can agree or disagree on whether they should live there, but they do. There are children there.

“I never got into the specifics, I would just transfer money to them,” Gafni said. “The mechanism works that way and they have been getting money for decades. They get special money.”

Critics have also found another target, in an arm of the World Zionist Organization, the historic body that helped create the Jewish state. Now overseen by the Prime Minister’s Office, the WZO’s Settlement Division acts as development agency in Israel but also – amid growing controversy – in the West Bank.

The CBS data showed its spending on settlements grew tenfold from 2008 to 2012, albeit to a modest 84.1 million shekels.

Among its projects has been financing the relocation in 2012 of dozens of settlers when an Israeli court ordered the army to clear Migron, one of about 100 unauthorized hilltop outposts classed as illegal even under Israeli law. The Settlement Division helped families rebuild nearby, still in the West Bank.

Pro-settler parliamentarians have rallied to block efforts in recent months to make the Settlement Division’s budget public – a success that only confirmed some critics’ suspicions.

“Money meant to boost construction is given under the table with no transparency or oversight,” said Hatnuah leader Livni, who was beaten to the premiership by Netanyahu in 2009 but since last year has sat in his coalition cabinet as justice minister.

“You only have to look at the united political front that has rallied to prevent transparency in the Settlement Division.”

Finance Minister Lapid complains that settlements are damaging the economy all round: “They hurt growth, GDP and economic ties with the world,” he said in a speech this month.

Citing two small, religious settlements that have seen violent clashes with Palestinians, he added: “There is money buried somewhere between Yitzhar and Itamar, which could have given us smaller school classes, better healthcare, narrower gaps between rich and poor … and a stronger army.”

The settlers’ main body, the Yesha Council, hit back, accusing Lapid of sowing national division and referring to his career as a broadcaster: “The claim that billions are hidden there is cheap and more becoming of populist media rather than a finance minister who understands the economy,” it said.

While for many settlers the main draw is cheap housing, many also cite deep religious and historic ties to the land and argue that the enclaves serve to strengthen Israel’s security.

Netanyahu, who rejects the argument that his expansion of settlements has undermined peace negotiations, says that to give up all the occupied territory would return Israel to borders left by a ceasefire in 1948 that he says would be indefensible.

While far from over, the argument now being framed in terms of economics has revived fundamental differences over the role of settlements that may affect future state spending on them.

Finance committee chair Slomiansky, who himself co-founded a settlement, cited deaths among residents in Palestinian violence and said settlers did a service for fellow Israelis: “People are willing to live in Judea and Samaria with great self-sacrifice.”

But Livni, the coalition’s negotiator with the Palestinians, said the opposite was true: “The settlements are not providers of security, they are consumers of it,” she said. “Roads are paved with billions of our tax money under the premise of security – but in reality they serve a handful of homes.”