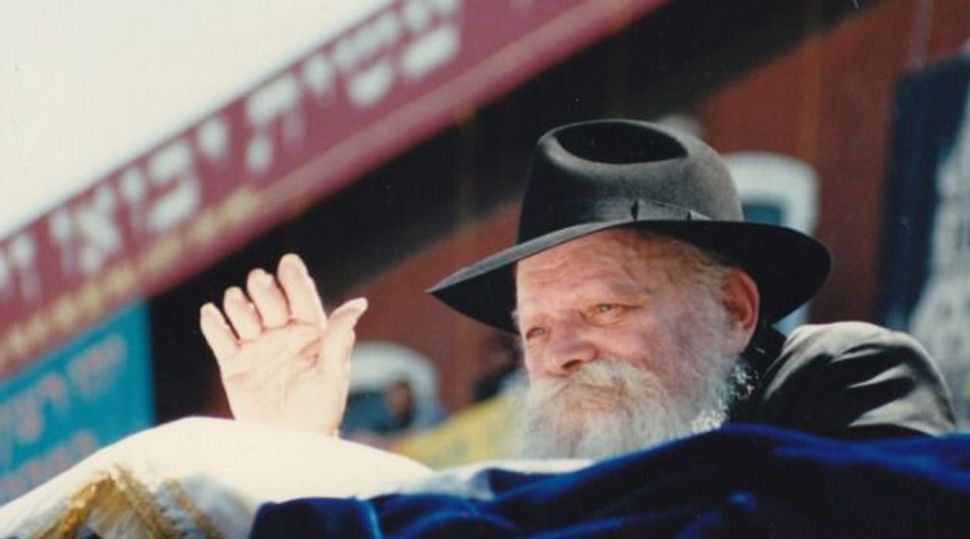 (JTA) — What does a fervent religious movement do after the death of its singular leader?

That was the existential question the Chabad-Lubavitch movement faced 20 years ago this week when its charismatic rebbe, Menachem Mendel Schneerson, died with no heir.

Amid the grief and turbulence following his 1994 death, many believed Chabad would be torn apart by those who believed it should proclaim its departed rebbe as the messiah and those who didn’t, or that the messianists would doom the movement’s wider appeal. Both views turned out to be wrong.

Not only hasn’t the movement fallen apart, Chabad has grown over the last two decades, despite the absence of a living rebbe at the helm.

The number of Chabad Jewish outreach emissaries, known as shluchim, has nearly quadrupled, from about 1,200 in 1994 to more than 4,100 today. Chabad has expanded its geographic reach, college campus presence, number of schools and Chanukah menorah displays. More than ever, Chabad is part of mainstream Jewish life.

And the rebbe, though he has passed, remains very much present. He has been packaged into countless hours of video, audio tapes and books. New pamphlets and documents focused on his sichot, or religious discourses, continue to be published. His photo adorns practically every Chabad household — not to mention pizza parlors, barbershops and mom-and-pop stores run by admirers or followers. Devotees still consult the rebbe daily, often in the form of letters delivered to his gravesite in Queens known as the Ohel.

But the absence of a living, speaking, guiding leader has transformed the movement in both subtle and fundamental ways.

“Everything’s different,” said Yakov Reichman, a middle-aged Israeli native who has lived in New York for nearly 40 years and works at Oholei Torah, a Chabad school with some 1,850 students. “Once there was a head of the house. Today, everyone does whatever he wants, in every respect. Yes, we have the rebbe’s sichot, but everyone’s interpreting them in their own way.”

Like many Chabadniks, Reichman compared the seventh Lubavitcher rebbe to Moses: The Jewish people survived Moses’ death, but there was no other leader like him. And like Moses, many Chabadniks viewed the rebbe as having had a direct line to God.

“There’s a gaping void. There is no one to replace the rebbe, that kind of spiritual leadership,” said Zalman Shmotkin, a Chabad spokesman. “But in a way there’s been no change, and that’s the most amazing thing. It keeps coming back to fundamentals: learn, daven, serve Hashem.”

Twenty years on, the primary pilgrimage site for the movement’s adherents has shifted, but only slightly: from the rebbe’s office at 770 Eastern Parkway in the Crown Heights section of Brooklyn to the Queens cemetery near John F. Kennedy International Airport where his remains are interred in a granite mausoleum. On Monday night and Tuesday, when the movement marked the 20th anniversary of the rebbe’s death — the yahrzeit is the third day of the Hebrew month of Tammuz — thousands flocked to the cemetery.

Dov Ber Dalven, 26, flew in from Israel just to be there on the rebbe’s yahrzeit.

“The rebbe hasn’t changed. We changed,” Dalven said. “Now we have to find the strength within ourselves to go forward with our mission.”

Without the rebbe around to articulate it, however, the mission is not always clear, especially on a personal level. As with many other Hasidic groups, followers often sought the rebbe’s counsel on important decisions like whom to marry, where to live or what livelihood to pursue. Now that guidance is gone.

“The rebbe used to tell you what to do. If they had a dilemma, they’d just ask the rebbe and the rebbe would direct them,” said Devorah, a 19-year-old store clerk in Brooklyn who declined to provide her last name. “Now we don’t have the same guidance. We don’t have clear answers to anything. We don’t know what our mission is. We’re just floating.”

There’s a divide between those who knew the rebbe and those who grew up without him, Devorah said. She described how teachers at her Chabad school become angry when they catch students chattering during video screenings of the rebbe’s talks.

“They say you should dress and behave as if the rebbe were right in front of you, but it’s hard,” Devorah said. “They expect us to feel the same connection they did to him, but they don’t understand that we don’t understand how great he was.”

Mendel Kantor, 19, who grew up in Bangkok, where his father is the Chabad emissary in the Thai capital, said the rebbe’s absence provides added incentive to hasten the messianic age.

There continues to be a strong messianic strain that runs through Chabad. Some followers refer to the rebbe as if he were still alive or refuse to characterize his passing as death. Almost universally, Chabadniks make pilgrimages to Schneerson’s gravesite on important dates, updating the rebbe about their lives or requesting his intercession or guidance.

Many believe he responds. One woman recalled her mother seeking direction about taking a job in education and walking out of the rebbe’s mausoleum to find herself face to face with a video of the rebbe teaching children. The mother took it as a sign that she should take the job.

Whatever Chabadniks’ views about the rebbe as messiah — Schneerson often described his era as the messianic age and made statements that followers interpreted to mean that Schneerson was himself the messiah — Chabad has managed to avoid having messianic fervor overshadow the movement. With the rebbe long gone, the question of whether or not Schneerson was/is the messiah has little practical bearing on day-to-day Chabad life — except, perhaps, as a motivating factor for performing mitzvahs.

Whether or not there is more or less motivation now to carry the torch for Schneerson’s mission of Jewish outreach varies by individual.

Miriam Goldin, 23, said she remembers when she was little that there was widespread eagerness among Chabad youths in becoming outreach emissaries. But with the rebbe gone and practically the whole globe covered, the idea of shlichus — being an emissary — has shifted, she said.

“Now you’re a shaliach wherever you are,” Goldin said. “If you see another Jew out there, you try to welcome them into the fold.”

Goldin used to want to be a shaliach; now she’s looking for a job in interior design.

Kantor says it’s a mistake to think there is no room for more emissaries. Even back in 1993, when his father went off to Thailand to be the emissary there, people said there was nowhere to go.