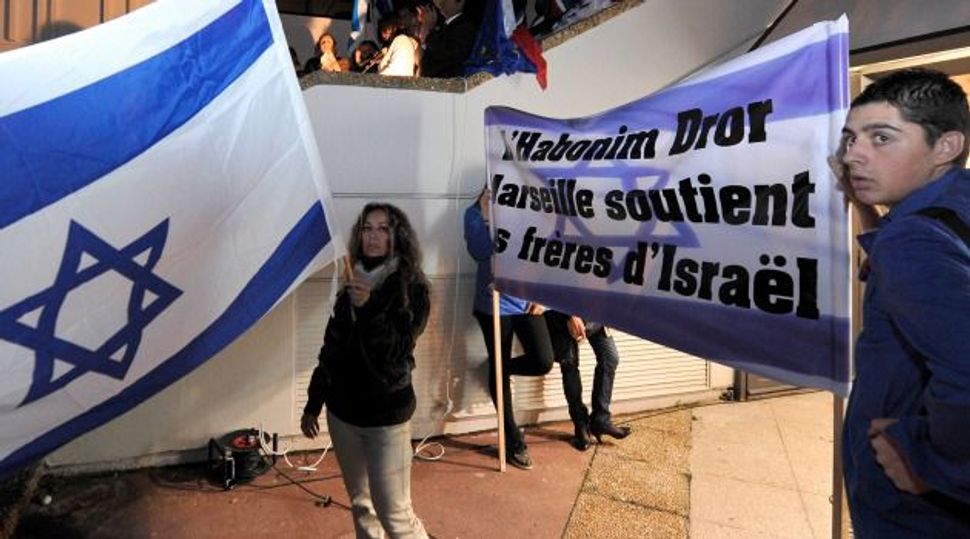 Au Revoir France: French Jews demonstrate support for Israel. Buffeted by economic pressure and rising anti-Semitism, more are lining up to immigrate to the Jewish state. Image by getty images

Hundreds of soon-to-be immigrants to Israel gathered at one of the French capital’s largest synagogues for a sendoff ceremony celebrating their departure.

Some 700 people attended the ceremony Wednesday at the Synagogue de Tournelles, which began with a moment of silence in memory of Naftali Fraenkel, Eyal Yifrach and Gilad Shaar, the Israeli teenagers whose bodies were discovered Monday near Hebron. They were kidnapped and killed on June 12.

Immigration levels from France are at record levels, which Jewish Agency officials attribute to the community’s strong emotional attachment to Israel, rising levels of anti-Semitism and a stagnant economy in France.

Many of the new immigrants cited anti-Semitism, which has increased in frequency since the outbreak of the second Palestinian intifada in the early 2000s.

“When I was a child, I could leave home wearing my kippah,” said one of the soon-to-be immigrants, Lionel Bresso, who is moving this month to Netanya. “Now I wear a baseball cap and my daughter leaves home only to go to school. I don’t want her to grow up like that.”

Jewish Agency chairman Natan Sharansky and his wife, Avital, were among those on hand at the ceremony along with Israeli Immigration Minister Sofa Landver and Haim Korsia, France’s newly elected chief rabbi.

During her address, Landver announced new regulations passed last month that she promised would ensure that most French professional diplomas — especially in paramedical fields such as optometry and physiotherapy — are automatically recognized in Israel, making it unnecessary for the new arrivals to retake exams.

“If you were good at your job here, you will be excellent in Israel,” she said. “We want you back home, our home.”

From January to May, a total of 2,254 French Jews have immigrated to Israel, or made aliyah, compared to 580 during the corresponding period last year. Another 1,000 to 1,500 are expected to immigrate this summer, according to the Jewish Agency.

In 2013, immigration from France crossed the 3,000-person mark — an increase of 31 percent over the annual average of new arrivals from France between the years 1999 and 2012 and a level reached previously only four times.