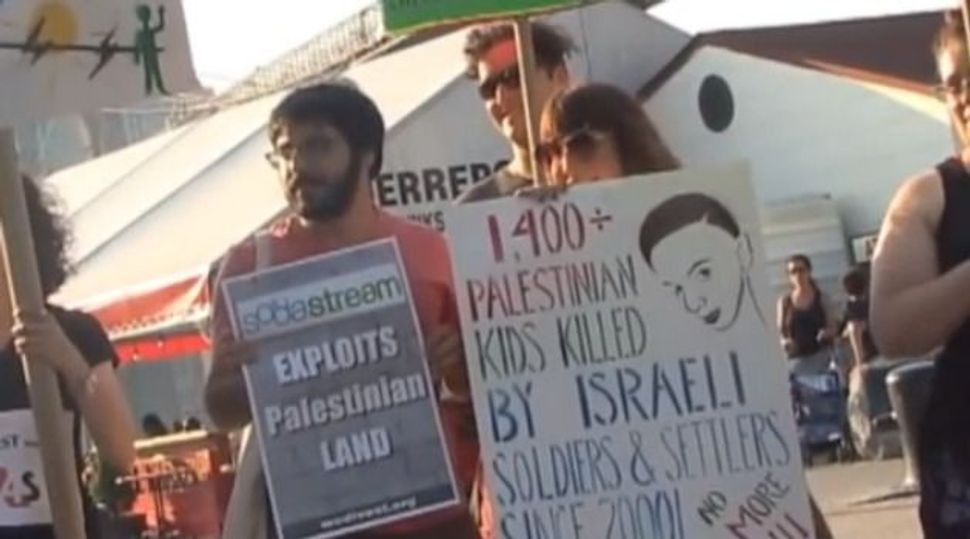 Protesters rally in Brooklyn to oppose Israel’s bombardment of Gaza. Image by COURTESY OF ADALAH

Cities where “We Divest National Week of Actions” protests took place included Boston, New York, Chicago, Los Angeles, Philadelphia, and San Francisco, according to Rabbi Alissa Wise, a director of organizing for the group and a member of its rabbinic council. The Oakland, Calif. group supports boycott, divestment and sanctions against Israel.

Sponsors of the Boston protest, which attracted about 100 people, included the American Friends Service committee, Grassroots International and Ads Against Apartheid, a group that has run an anti-Israel poster campaign on the Boston transit system.

After a rally on the Boston Common, the group, including many students and young people as well as members of a few faith and labor groups, marched through downtown streets and picketed briefly in front of three companies they say are complicit in the violence. One was Macy’s which was targeted as part of a boycott campaign of SodaStream products made in a West Bank settlement, and TIAA-CREF, a retirement investment fund.

“We are here to condemn Israel’s collective punishment of Palestinians, to mourn the loss of lives, and to hold accountable the corporations that enable this violence,” said Lisa Stampnitzky, an activist with the Boston chapter of JVP.

Boston’s Jewish establishment did not stage any counter protests.

“We’re devoting all our energies to supporting Israelis who are facing an impossible situation with a reprehensible enemy sworn to Israel’s destruction,” said Elana Margolis, assistant director of the Jewish Community Relations Council.

A rally in support of Israel is being planned by the Boston area chapter of StandWithUs, a national pro-Israel organization with a presence on college campuses, according to Aviva Malveira, a recent Boston University graduate who is now the group’s New England campus and community organizer.

“It’s important to speak out on behalf of Israel,” Malveira told JTA. “It’s unfortunate and sad that Jewish Voice for Peace aligns itself with an anti-Israel agenda. They blame solely Israel for the lack of peace and place no responsibility on the Palestinian leadership.”

Wise said that JVP mourns all of the victims of the conflict and said that it would be short-sighted to view last month’s kidnapping and murders of three Israeli teens as the launch of the current fighting. “This is a conflict that goes back 47 years,” she said referring to Israel’s capture of the West Bank and the Gaza Strip in the 1967 Six-Day War. “To not see that context would miss the story.”

Massachusetts Gov. Deval Patrick (D), who has led trade and academic delegations to Israel, said in a statement to JTA that the state’s residents extended their concern to all those in the region.

“It is difficult to imagine that only a few weeks after our most recent visit, sirens warn of rocket attacks from Gaza over Tel Aviv,” the statement from Patrick’s office said. “We hold close in our hearts our friends and loved ones in the region, and all innocent Israelis and Palestinians who are living in fear as a result of the recent violence.”

Separately, Ads Against Apartheid issued a statement on Thursday condemning the Massachusetts Bay Transit Authority for taking down its pre-approved posters without prior warning, claiming it was the result of pressure from pro-Israel groups.

MBTA Spokesman Joseph Pesaturo in an email to JTA confirmed that after additional scrutiny by the transit authority, the three posters were removed, four days before they were scheduled to come down.

“The ad was deemed to be in non-compliance with the MBTA’s court-approved advertising guidelines,” Pesaturo said.

He said it was the responsibility of the agency’s advertising contractor to inform the ad buyer.