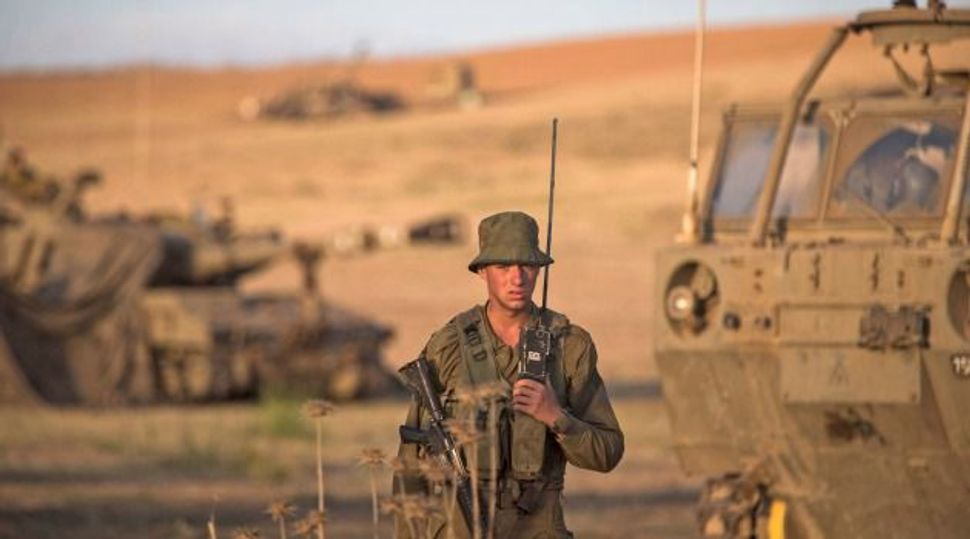 Israel said it shot down a drone from Gaza a week into its offensive on Monday, the first reported deployment of an unmanned aircraft by Palestinian militants whose rocket attacks have been regularly intercepted.

Hamas, the Islamist group which runs Gaza, said its armed wing had sent several drones to carry out “special missions” deep inside Israel – a development which, if confirmed, would mark a step up in the sophistication of its arsenal.

More than 166 Palestinians, most of them civilians, have been killed, Gaza health officials said, in seven days of fighting that has shown no sign of ending.

Israel appeared to hold off on a threatened escalation of its week-old Gaza Strip barrage on Monday despite balking at Western calls for a ceasefire with an equally defiant Hamas.

On Sunday, the Israeli military had warned residents of the northern border town of Beit Lahiya to leave or risk their lives when, after nightfall, it planned to intensify air strikes against suspected Palestinian rocket sites among civilian homes.

But other than a lone air strike on farmland outside the town, which the Palestinians said caused no casualties, Beit Lahiya was largely quiet in the early hours of Monday. Israel said one rocket was fired from Gaza without inflicting damage.

Israel has not suffered fatalities, due in part to the success of its Iron Dome rocket interceptors, but the salvoes have disrupted life in major cities, paralyzed vulnerable southern towns and triggered Israeli mobilization of troops for a possible Gaza invasion if the air campaign failed to curb Hamas.

Asked about the delay in the Israeli escalation, a military officer declined comment other than to cite “situational assessments” – a term that could potentially refer to the scope of Beit Lahiya’s evacuation or broader strategic deliberations.

Israel’s Army Radio said there had been “definite signals” that Gaza’s dominant Hamas Islamists sought to tamp down the violence, though the report did not elaborate nor cite sources.

The call was echoed by France and by Germany, which will send its foreign minister to the region on Monday. But with the United States and European Union, like Israel, shunning Hamas as a terrorist group, Middle Eastern intermediaries were mooted.

A U.S. official said that Kerry, in a phone conversation with Netanyahu, “described his engagement with leaders in the region to help to stop the rocket fire so calm can be restored and civilian casualties prevented, and underscored the United States’ readiness to facilitate a cessation of hostilities, including a return to the November 2012 ceasefire agreement”.

That referred to an Egyptian-mediated accord that doused the last big Gaza flare-up. Cairo is now again seeking calm. Hamas, said it also received U.S. overtures through Abbas and Qatar. Turkey has sought to intercede as well, Israeli media said.

Netanyahu’s spokesman declined to discuss the conversation with Kerry. Another Israeli official played down the truce talk.

“We are not considering this-or-that proposal,” the official, who declined to be named, said late on Sunday.

While allowing that a diplomatic solution could eventually be found, the official said Israel would, for now, pursue its military offensive “to restore quiet over a protracted period by inflicting significant damage to Hamas and the other terrorist groups in the Gaza Strip”.

Hamas and Islamic Jihad, the second-most potent Gaza faction, made clear they would not accept a mere “calm for calm” where both Palestinian fighters and Israeli forces stand down.

“There can be no ceasefire unless the conditions of the Resistance are met,” he added, saying Israel had to stop blockading Gaza and free hundreds of Palestinians it rounded up in the occupied West Bank last month while searching for three Jewish seminary students who it said were kidnapped by Hamas.

Rocket fire from Gaza had increased during the West Bank dragnet. Tensions were further inflamed when the three teens’ bodies were discovered, after which suspected Israeli avengers abducted and killed a Palestinian youth from East Jerusalem.

Hamas neither confirmed nor denied responsibility for the West Bank kidnappings, which came as it struggled to parlay the unity deal with Abbas into economic relief for Gaza, whose other border with Egypt has been sealed off by a Cairo government that considers the Palestinian Islamists a security threat.

“There can be no settlement or mediation without an esteemed Egyptian role in compelling the (Israeli) enemy to cease fire,” the group’s leader, Ramadan Shallah, told Al Jazeera. He added that “the battle will not end unless the (Gaza) siege is ended”.

The Gaza Health Ministry said at least 166 Palestinians – among them about 138 civilians, including 30 children – have died during six days of warfare, and more than 1,000 wounded.