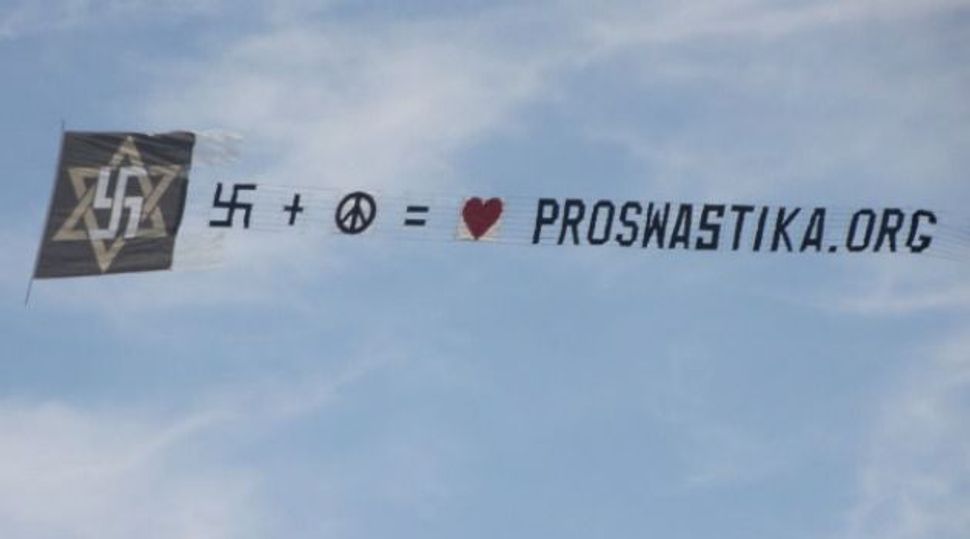 New York beachgoers were stunned over the weekend when a plane flew overhead trailing a banner bearing a swastika.

The Raelian group, an organization who believes that the swastika should be reintegrated as a symbol for peace, commissioned the fly-by, which was visible from heavily Jewish beach neighborhoods like Brighton Beach and Coney Island.

The banner depicted the Nazi symbol intertwined with a Star of David.

On its website, the Raelian group explains that, “The swastika symbol is one of the oldest symbols on the Earth and can be found in all religions and traditions,” and that it is “not a Nazi symbol.”

According to Thomas Kaenzig, a Raelian spokesman, “It’s very important to reclaim [the swastika] and explain to the public that this symbol has a beautiful origin.” He told the Wall Street Journal, “We’re here to educate people, not offend people.”

Still, many people were not seeing universal love in the banner.

“It was horrific,” Ariel Creamer,14, who had relatives who perished during the Holocaust, told the New York Post.

New York City Councilman Mark Treyger said, “It’s a very chilling image, in the light of the fact that southern Brooklyn has the largest remaining number of World War II and Holocaust survivors.”