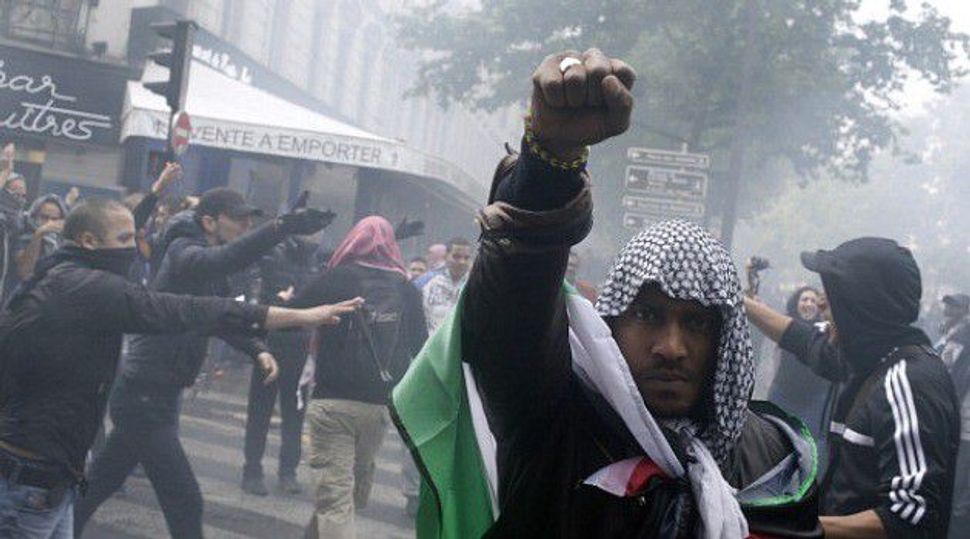 Paris police recommended that the city forbid pro-Palestinian activists from going ahead with plans to hold a massive anti-Israel protest.

Police sources told the AFP news agency on Wednesday that the prefecture has made its position known to city officials over the planned demonstration Saturday outside the Barbas–Rochechouart metro station near the northern Gare du Nord train station.

The Paris Prefecture of Police has taken the position due to “serious risks to public order” in “a context of elevated tension,” the RTL broadcaster quoted a police source as saying.

On Sunday, several dozen pro-Palestinian demonstrators who splintered off a demonstration against Israel’s actions in Gaza besieged a synagogue in central Paris, near the Gare de Lyon station.

Chlomi Zenouda of the National Bureau for Vigilance Against Anti-Semitism, or BNVCA, told JTA that his organizations believe “there is a serious risk that despite the [possible] ban, the protesters will hold illegal gatherings because their objective is not to protest in a legal manner but to destabilize the life of the Jewish community.”

On Tuesday, the website Europe-Israel.org reported that pro-Palestinian activists were calling on social media for “smashing the Jews” at the demonstration they were planning.

“We’ll smash the Jews Saturday,” wrote one activist identified by the Twitter handler “Amine Blmh.” “Obviously we won’t be alone on Saturday, the Jews will also be there.”

In the incident Sunday, video taken at the scene showed guards from the SPCJ security unit, as well as members of the Jewish Defense League and Beitar on patrol there, confronting the protesters and chasing them away. Police later arrived with reinforcements who broke up a massive street brawl that erupted outside the Don Isaac Abravanel Synagogue.

The incident provoked angry reactions from Jewish organizations in France and abroad, as well as from French President Francois Hollande, who said during a television interview, “Political conflicts will not be allowed to be imported into France. Places of worship will not be threatened.”