How Jewish Revenge Killers Decided To Kill Palestinian, ‘Finish Him Off’ 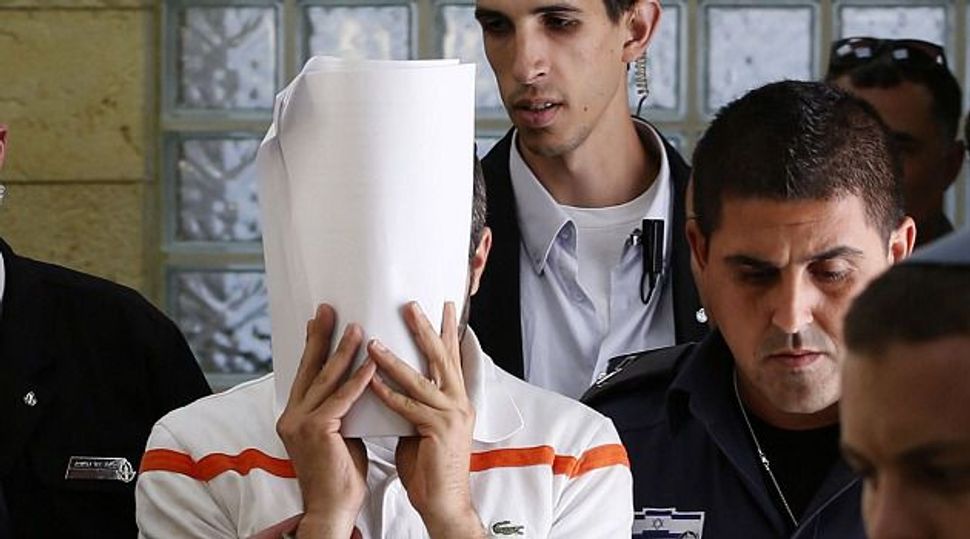 Image of Evil: The accused ringleader of a Jewish extremist group appeared in court on charges he killed a Palestinian teen at random to take revenge for the murders of three Israelis. Image by getty images

(Reuters) — First they removed the baby seat to make room in the car, and then three Israelis searched for an Arab to kidnap and kill to avenge the deaths of three Jewish teenagers, according to a murder indictment released on Thursday.

Mohammed Abu Khudair’s death stoked Palestinian street protests in Jerusalem and in Israeli Arab villages, and served as a trigger for warfare between Israel and rocket-firing militants in the Gaza Strip now in its 10th day.

Two weeks after Mohammed, 16, was dragged screaming into a Honda vehicle outside his East Jerusalem home, his final minutes were described in graphic detail in a 10-page charge sheet issued by Israel’s Justice Ministry.

The slightly built high school student fought his abductors in the back seat of the car until one pressed his elbow against the youth’s throat. A second assailant helped push the arm deeper, choking Mohammed into silence.

“Finish him off,” the car’s driver urged the two, according to the indictment.

The teen was still alive, but unconscious, it said, when he was doused with fuel in a Jerusalem forest and set alight. His charred body was found hours later, the victim of what the charge sheet termed “an act of vengeance”.

Before striking the match, the driver — the owner of an eyeglass store in Jerusalem who prosecutors said has a history of psychiatric problems — kicked Mohammed three times, according to the indictment.

“This is for Eyal, this is for Gilad, this is for Naftali,” it quoted him as saying as his foot struck, using the first names of the three Jewish seminary students whose bodies were found in the Israeli-occupied West Bank two days earlier.

Israel says Eyal Yifrach, 19, and Gilad Shaer and Naftali Fraenkel, both 16, were abducted and killed by Islamist Hamas militants while hitchhiking in the territory. The Islamist group has neither confirmed or denied involvement.

The defendants in Mohammed’s killing – an adult and two minors – were not named publicly in the charge sheet, which said a court order against their identification was in effect. If convicted on murder and kidnapping charges, the adult could face life imprisonment and the minors a shorter sentence.

They appeared in a Jerusalem court to hear the indictment read but a spokesman for a legal aid society representing them said pleas would be entered only at a later stage. Police, who used security camera footage to trace the car, said the three had confessed and re-enacted the killing for investigators.

“Defendant number 1”, the store owner, has been taking medication for mental illness for years and suffers from Obsessive-Compulsive Disorder, the charge sheet said. The website of the U.S. National Institutes of Health, says OCD symptoms include an inability to control unwanted thoughts and behavior.

“Defendant 2” is described as a Jewish seminary student. The third accused had pursued religious studies but later worked in a toy shop. He, too, the charge sheet said, takes psychiatric drugs and has OCD.

It was the shop-owner who suggested to one of the accused minors, on the day after the Israeli youths were found dead, that they take revenge on an Arab, the prosecution said.

Then the pair hit the road in the middle of the night, some 24 hours before they grabbed Mohammed, and searched for a victim in Arab neighborhoods of Jerusalem.

Near a mosque, they spotted a Palestinian mother pushing a baby stroller as two of her small sons walked behind. Jumping out of the car, “Defendant number 2” tried to pull one of the children in, according to the indictment.

The mother cried out and threw herself at the Israeli who, the indictment said, had changed from traditional Orthodox garb to clothes he hoped would disguise his Jewish identity. He punched the woman in the face and she fell to the ground.

But one of her sons had run off and alerted passersby, who drew nearer. The assailants fled.

They set off again the next night, this time with “Defendant number 3” in the Honda, according to the indictment.

After stopping around 2 a.m. for energy drinks, it said, the three spotted Mohammed, but initially passed him by, deciding that a nearby Arab hitchhiker would be easier prey. By the time they circled around, both were gone.

At 3:45 a.m., they again came upon Mohammed, who his family said was waiting to go to morning prayers with friends. Thirty minutes later, he was dead, struck twice in the head with a metal bar and then burned.

After the indictment was read in Jerusalem District Court, Israel announced it was assigning a special status to the slain teenager enabling his family to receive government benefits.

It designated the Palestinian youth a “victim of terrorism”.

How Jewish Revenge Killers Decided To Kill Palestinian, ‘Finish Him Off’