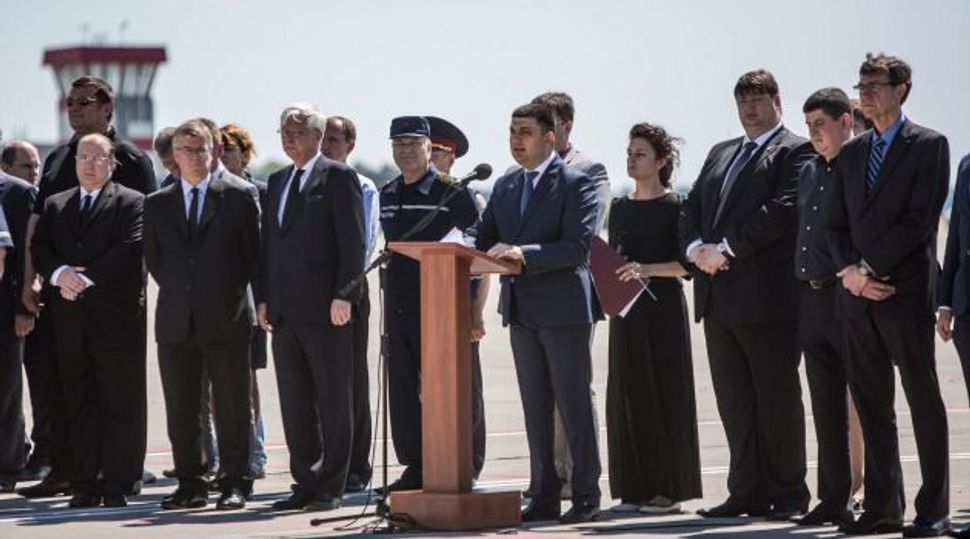 Volodymyr Groysman, then Deputy Prime Minister of Ukraine, speaks at a departure ceremony for the victims of the crash of Malaysia Airlines flight MH17. Image by Getty Images

Volodymyr Groysman, a deputy prime minister who is Jewish, was appointed acting prime minister of Ukraine following the resignation of Arseniy Yatsenyuk.

Groysman was tapped at a special Cabinet meeting on Thursday, according to the RIA Novosti news site. He joined the government in February as deputy prime minister for regional policy and is a former mayor of the city of Vinnytsia.

Groysman will serve until lawmakers elect an interim prime minister prior to parliamentary elections early next year. Oleksandr Turchynov, the parliament’s speaker, has asked parties to nominate candidates.

Yatsenyuk resigned Thursday after two coalition partners pulled out to launch the process for new parliamentary elections — the first since the ouster in February of Viktor Yanukovych, the Russian-backed president.

Radio Free Europe/Radio Liberty quoted a senior member of one of the coalition parties that pulled out as saying that they had expected Yatsenyuk to remain as interim prime minister, but Yatsenyuk said in his resignation announcement that he was frustrated at his inability to get laws passed.