5 Killed as Violence Spreads to West Bank and 10,000 March 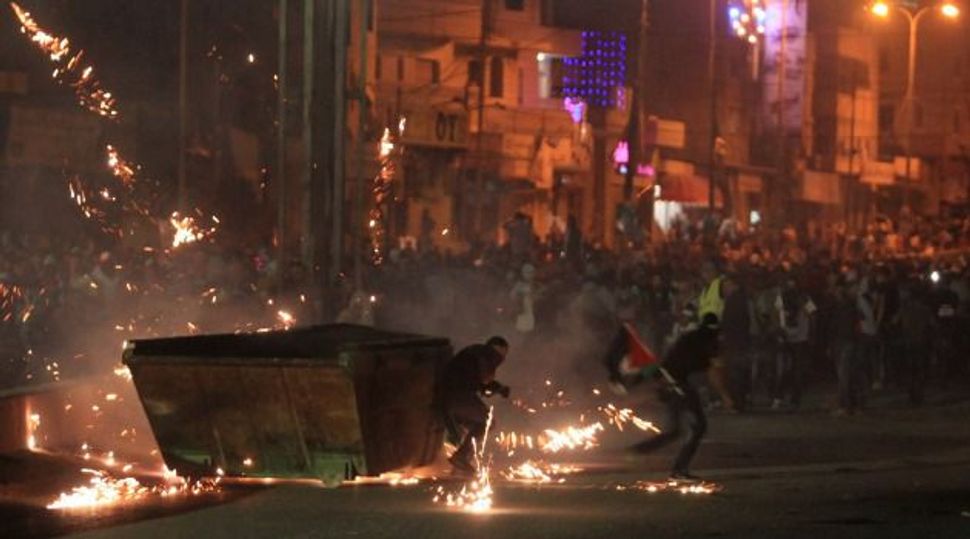 Intifada on Way? More than 10,000 Palestinians clashed with Israeli troops in the occupied West Bank — raising the spectre of a spreading uprising across the Palestinian territories. Image by getty images

(Reuters) — Five Palestinians were killed in the occupied West Bank on Friday in shootings involving both Israeli forces and a civilian who appeared to be a Jewish settler, medics and witnesses said.

Three Palestinians were killed during clashes between Israeli forces shooting live bullets and protesters throwing stones near the flashpoint city of Hebron.

In a separate incident near another protest against the ongoing conflict in Gaza, witnesses said a person in a car believed to be a settler shot dead one man and wounded three others near the city of Nablus.

The victims were walking along a main street used by both Palestinians and settlers.

Israeli forces also shot and wounded two protesters and a local journalist approaching a military checkpoint near a settlement beside the West Bank city of Ramallah.

The Israeli police said it was investigating the violence.

The clashes follow the killing of a Palestinian north of Jerusalem during a thousands-strong protest which was one of the largest since a Palestinian uprising which ended in 2005.

Palestinian fury has mounted after 822 Palestinians – mostly civilians, according to Palestinian medics – have been killed in nearly three weeks of cross-border fighting between Israel and Palestinian militants in Gaza. The United States and regional powers are urgently seeking a truce.

Secretary of State John Kerry pressed regional proxies to nail down a Gaza ceasefire on Friday as the civilian death toll soared, threatening to spread Israeli-Palestinian bloodshed to the occupied West Bank and Jerusalem.

With Israel and Hamas-led Islamist fighters setting seemingly irreconcilable terms for a truce that mediators hope will begin by a Muslim festival next week, Kerry worked the phones from Egypt, while aides made clear his patience was limited.

The urgency was spurred on Thursday by the killing of 15 people as they sheltered at a U.N.-run school in the northern Gaza Strip, which local officials blamed on Israeli shelling.

Israel said its forces had come under attack from Palestinian guerrillas in the area of the school and that they had shot back. It accused Hamas of preventing any evacuation.

Gaza officials said Israeli strikes killed 19 people on Friday, including the head of media operations for Hamas ally Islamic Jihad and his son. They put the number of Palestinian deaths in 18 days of conflict at 808, most of them civilians.

In the occupied West Bank, where U.S.-backed Palestinian President Mahmoud Abbas governs in uneasy coordination with Israel, some 10,000 demonstrators marched in solidarity with Gaza overnight – a scale recalling mass revolts of the past.

Protesters surged against an Israeli army checkpoint, throwing rocks and Molotov cocktails, and Palestinian medics said one was shot dead and 200 wounded when troops opened fire.

On Friday, Israeli paramilitary police went on high alert for flare-ups at Jerusalem’s most important mosque during prayers for the final stretch of the Ramadan Muslim holy month.

Yitzhak Aharonovitch, Israel’s police minister and a member of the security cabinet, said he was shuttling between consultations on how to contain the rising hostilities.

“We have had a very difficult night,” he told Israel’s Army Radio. “I hope we can get through today all right.”

Israel has lost 32 soldiers in a Gaza ground advance it says aims to destroy dozens of cross-border infiltration tunnels used by Hamas to threaten its southern villages and army bases.

Three civilians have been killed in Israel by rocket and mortar attacks from Gaza – the kind of shelling that surged last month amid Hamas anger at a crackdown on its activists in the West Bank, prompting the July 8 launch of the Israeli offensive.

A flurry of long-range rocket launches on Friday set off sirens around Israel’s commercial capital of Tel Aviv, where witnesses reported several interceptions by the Iron Dome air defense system. A building was hit in the southern coastal town of Ashkelon but there were no casualties.

Israeli Prime Minister Benjamin Netanyahu was to convene the security cabinet on Friday to discuss a limited humanitarian truce under which Palestinian movement would be freed up to allow in aid and for the dead and wounded to be recovered.

An Israeli official briefed on security cabinet discussions envisaged an initial seven-day halt to the fighting during which the army would keep digging up tunnels on Gaza’s eastern frontier.

“First Israel wants to hear Hamas’s response to the (Kerry) proposals,” the official said on condition of anonymity.

Netanyahu has said any truce should lead to the eventual stripping of Gaza’s rocket arsenals – something Hamas rules out.

“We must stop the rocket launches. How this is done – whether through occupying (Gaza), or broadening (the operation), or (international) guarantees, or anything else, I have to see it with my own eyes,” said Aharonovitch.

The rockets have sent Israelis regularly rushing to shelters and dented the economy despite Iron Dome’s high rate of success.

Jolted by the blow at the height of an already stagnant summer tourism season, Israel persuaded U.S. authorities to lift the flight ban on Thursday, after which the European aviation regulator removed its own advisory against flying to Ben Gurion.

In the second such salvo in as many days, Hamas said it fired three rockets at the airport on Friday, an apparent bid to cripple operations there anew. There was no word of impacts at Ben Gurion, whose passenger hall emptied at the sound of sirens.

Hamas, like Israel, was biding its time in the truce talks.

“There is nothing new yet regarding the efforts to achieve calm,” group spokesman Sami Abu Zuhri said on Friday.

Hamas leader Khaled Meshaal had on Wednesday voiced support for a humanitarian truce, but only if Israel eased restrictions on Gaza’s 1.8 million people.

Hamas wants Egypt to open up its border with Gaza, too, and has demanded that Israel release hundreds of prisoners rounded up in the West Bank last month following the kidnap and killing of three Jewish seminary students.

Such concessions appear unlikely, however, as both Israel and Egypt consider Hamas a security threat.

One Cairo official said next week’s Eid al-Fitr festival, which concludes Ramadan, was a possible date for a truce. But U.S. officials were circumspect on progress made by Kerry, whose mediation has involved Egypt, Turkey, Qatar and Abbas, as Washington, like Israel, won’t deal directly with Hamas, which it considers a terrorist group.

“Secretary Kerry has been on the phone all morning, and he will remain in close touch with leaders in the region over the course of the morning as he continues work on achieving a ceasefire,” said a senior U.S. State Department official in Cairo, which has been Kerry’s base over the last four days as he has tried to bring about a temporary end to the conflict.

On Thursday, a U.S. official said Kerry was seeking a way of bridging gaps between Israel and Hamas but that the diplomat would not stay in the region “for an indefinite amount of time”.

More than 140,000 Palestinians have been displaced in Gaza by the fighting, many of them seeking shelter in buildings run by the United Nations Relief and Works Agency (UNRWA).

An UNRWA spokesman said the agency had tried in vain to arrange with Israel for an evacuation of civilians from the school in northern Beit Hanoun before it was shelled on Thursday.

Scores of crying families who had been living in the school ran with their children to a hospital a few hundred meters away where the victims were being treated. Laila Al-Shinbari, a woman who was at the school when it was hit, told Reuters that families had gathered in the courtyard expecting to be evacuated shortly in a Red Cross convoy.

“All of us sat in one place when suddenly four shells landed on our heads … Bodies were on the ground, (there was) blood and screams. My son is dead, and all my relatives are wounded, including my other kids,” she said, weeping.

5 Killed as Violence Spreads to West Bank and 10,000 March