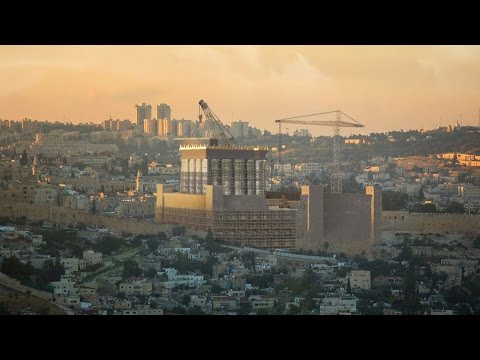 (JTA) — An organization based in Jerusalem is working on a detailed architectural blueprint for the Third Jewish Temple on Jerusalem’s Temple Mount — and has turned to the internet for help with the controversial project.

The Temple Institute, which has recreated 60 vessels to be used in a Third Temple and which sponsors educational programs about the temple worldwide, has created a $100,000 Indiegogo campaign to draft plans for a Third Temple. Building the temple, says the Indiegogo campaign statement, would “usher in a new era of universal harmony and peace,” as prophesied in the Bible.

“It is not enough to wait and pray for the Third Temple,” the statement added. “It is a Biblical obligation to build it.”

According to Rabbi Chaim Richman, the institute’s international director, the temple would stand in the present location of the Dome of the Rock, a Muslim shrine. Muslims revere the mount as the Haram al-Sharif, or Noble Sanctuary.

That makes the concept anathema to the Islamic world and would likely spark widespread worldwide controversy if it ever got off the ground.

Richman did not set a target date for breaking ground for the construction project. The temple will be built, he told JTA, when “the world will want us to build the temple.”

“The Jewish people have a responsibility to all of humanity, including Islam,” Richman said. “I don’t expect it to come about through any sort of confrontation or any sort of military maneuver. The Jews have to represent good in the world, light in the world.”

The Indiegogo campaign is tied to the upcoming fast of Tisha b’Av, which mourns the First and Second Temples’ destruction. Richman quoted the verse in Isaiah calling the temple “a house of prayer for all nations.”

But recently, the Temple Mount has been the scene of confrontation. Palestinian groups have repeatedly protested Jewish groups visiting the mount in recent weeks. Police spokesman Micky Rosenfeld told JTA that on Saturday, a group of Palestinian rioters burned and heavily damaged the police stand on the mount.

Referring to these incidents, Richman said the mount “is overrun by terrorists. This is a tangible fact.” He said rebuilding the temple is the next step to Israel’s current military operation in the Gaza Strip.

“We cannot be the people we’re supposed to be without the Holy Temple,” he said. “So what if we root out the [Gaza] tunnels and missiles? Then what are we doing with our lives? The redemption of humanity is dependent on the Jewish people.”