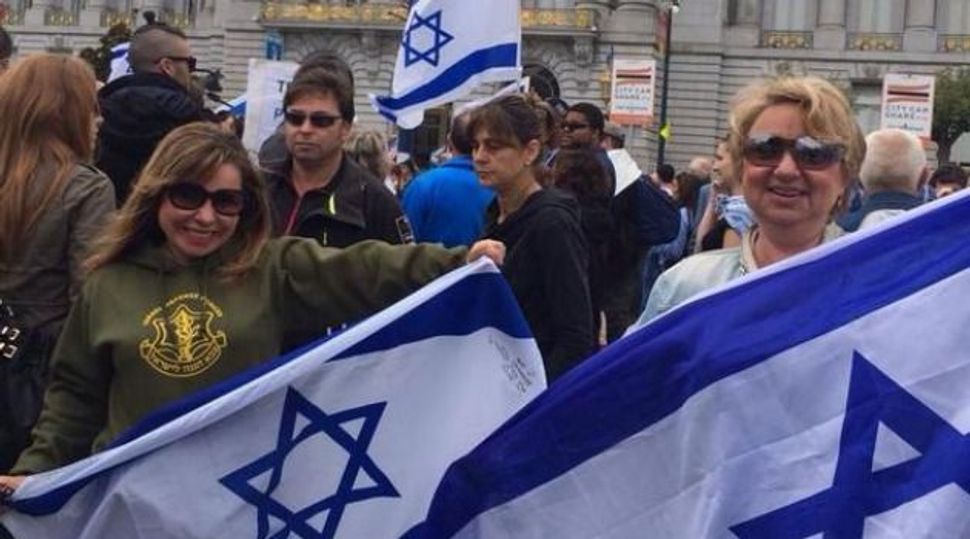 Image by act for israel

Some 3,000 Israel supporters turned out in downtown San Francisco for a pro-Israel, pro-peace rally.

The Bay Stands With Israel solidarity rally began across the street from San Francisco City Hall, with speakers from Jewish organizations, synagogues, and state and city government. Police estimated the crowd at 3,000; afterward, some 1,200 demonstrators marched along Market Street to Justin Herman Plaza, a mile away, under police escort.

In contrast to anti-Israel demonstrations held in the city the previous two weekends, Sunday’s event was peaceful. Six counter-demonstrators, one holding a large Palestinian flag, stood near the rally, and a few protesters followed the post-rally march, but no altercations ensued.

Among the signs on display at the demonstration Sunday were placards reading “I stand with Israel,” “Kids deserve peace,” “Israel is the only country in the Middle East where they don’t burn American flags” and “More Hummus, Less Hamas.” There were also hundreds of Israeli flags.

“Israel has been vilified in parts of the Bay Area,“ Rabbi Doug Kahn, head of the local Jewish Community Relations Council, said in his speech to the crowd. “For what? For defending its citizens from incessant rocket attacks? For caring enough about its citizens, Jewish and Arabs, to build an elaborate defense system? For risking its own soldiers’ lives to minimize casualties among innocent civilians used by Hamas to hide behind?

“Enough of the hypocrisy by Israel’s detractors. We must dedicate ourselves more than ever to share the real Israel that we know and love.”

The rally was spearheaded by a group of young Israeli-Americans and co-sponsored by 38 Jewish organizations.