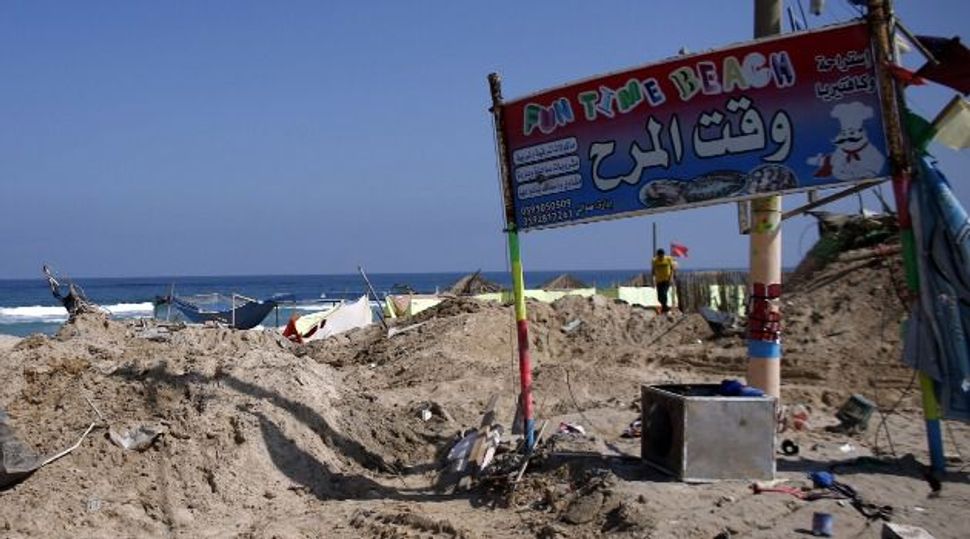 (Reuters) — With its spacious villas and palm-lined streets, the town of Khuzaa in southern Gaza gave Palestinians a rare place to spend their free time before it was bombed and shelled to rubble last month.

Largely free of the local tensions and feuds found in other neighborhoods, Khuzaa’s green spaces were one of just a few destinations for daytrips in the crowded Gaza Strip, where 1.8 million people live in just 360 sq km (140 sq miles).

Around 500 meters from the Israeli border, Khuzaa is now only accessible via cratered roads strewn with debris. Nearly all of its homes have been flattened and its nine mosques lie in pieces.

“This was the best area in all of the Gaza Strip, it was a tourist area – secure and safe with no problems and good people,” said Sami Qudih, head of Khuzaa’s municipal council.

“Khuzaa no longer exists, it is like an earthquake hit,” he said in a makeshift office – a garage next to his destroyed family home.

“We have no water, no electricity, I have been wearing these same clothes for ten days,” he said, tugging his filthy flannel shirt. “I have no house, I have no Hamas, I have no jihad. I am a citizen, that is it and now I have nothing.”

Israel pulled its ground forces out of the Gaza Strip on Tuesday and started a 72-hour ceasefire with Hamas as a first step towards negotiations on ending the month-old war.

Gaza officials say the conflict has killed 1,874 Palestinians, most of them civilians. Israel says 64 of its soldiers and three civilians have been killed since fighting began on July 8, after a surge in Palestinian rocket launches.

In Khuzaa, people say at least 70 were killed and more bodies may lie beneath the rubble. It was a site of fierce fighting between Israeli forces, Hamas and other Palestinian militants, who said they detonated explosives and fired anti-tank rockets at Israeli troops.

Israel says it urged residents to leave and seek shelter in nearby Khan Younis before the fighting in Khuzaa began. But residents have said many were not able to leave their houses in time and that some were fired on as they fled upon army’s instructions.

Citing residents, Human Rights Watch said on Monday Israeli forces fired on and killed civilians in the town between July 23 to 25, actions which it said if proven would be war crimes.

A once affluent town in a fertile farming area, many of Khuzaa’s residents owned land and property, unlike in other parts of the Gaza Strip where people rent or live in camps and temporary shelters.

Now thousands of people from Khuzaa are living in aid shelters in schools and return only to check the damage or gather any belongings they can salvage.

Some 260,000 people are sheltering in U.N. facilities in Gaza and human rights groups put the total number of displaced at 520,000.

After fleeing the violence, Ahmed Awad Abu Salah, 39, returned with his wife Fariah to find their home mostly intact but ransacked and littered with tins of food with Hebrew labels they said were left behind by Israeli soldiers.

They found children’s clothes and books strewn across the floor, kitchen fittings hanging from the walls and the family’s Koran in the toilet. The walls of the once elegant living room are peppered with bullet holes.

“This was once the beautiful garden, there was a fountain, a nice place,” Ahmed said, pointing to a patch of grass covered in crumbing concrete and twisted metal. The date palms planted eight years ago lean at crazy angles.

“Look – they destroyed them one by one,” his wife said, pointing to mounds of debris where homes once stood.

Israel has accused Hamas of causing hardship by launching rockets at its cities from Gaza neighborhoods and using mosques and schools as arms depots, thereby drawing Israeli strikes.

With nowhere else to go in Khuzaa, groups of men and boys perch on rubble under trees and cook tea and coffee on open fires. A woman stumbles across mounds of debris, holding a teapot lid she unearthed from the remains of her home. Children run around rotting trash, kicking up the dust.

“This was the best town in all of Gaza, a wealthy area where people lived well together. Now I have no words to describe it,” 54-year-old Mohammed Khalil Najjar said, his voice faltering.

He pointed out his house across the road, a series of floors flattened together and leaning at an angle. He rebuilt the house in 2009 after it was one of the few badly damaged during that Gaza conflict. “I cannot build it again. That’s it,” he said.

Gaza officials say it will cost around $6 billion to rebuild devastated infrastructure across the territory.

Qudih, the head of Khuzaa’s council, now spends his days driving around in a pickup truck, making sure roads are cleared and that people have water brought in from the next town. He smiles briefly when remembering the kind of town he used to run.

“I have worked in many different places in this region and Khuzaa is different, it is beautiful and safe,” he said, before correcting himself: “It was safe.”