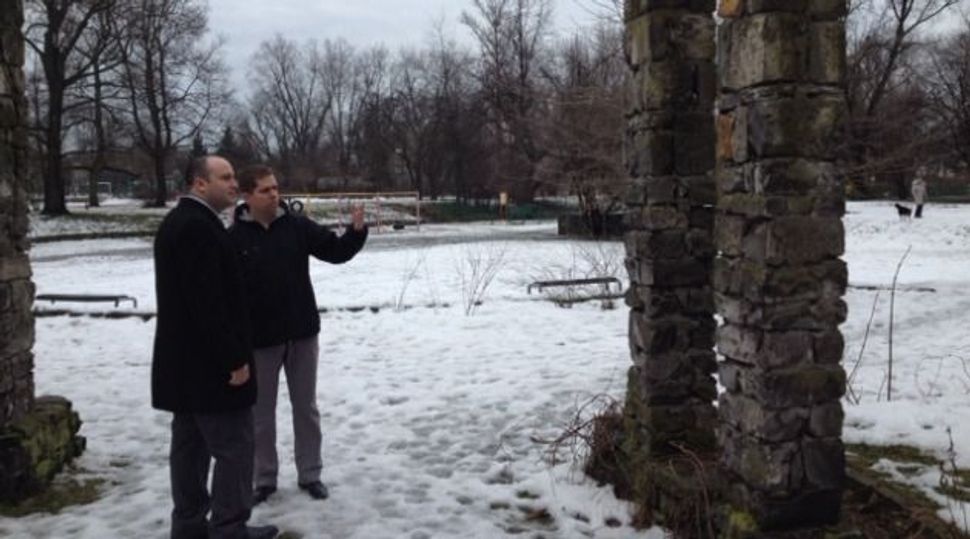 A structure made out of Jewish headstones at a park in Warsaw earlier this year. Image by Courtesy of From the Depths

The City of Warsaw has agreed to return and preserve 1,000 Jewish headstones that were used to construct a recreational facility inside one of the city’s parks.

The headstones, which are currently part of a pergola and stairs at a park in Warsaw’s Praga district, will be returned in the coming months to the Brudo Jewish Cemetery in Warsaw, according to a statement Friday by From the Depths, the international commemoration nonprofit that led talks on the subject with city officials.

The city allocated a budget of $180,000 for the project, according to Jonny Daniels, From the Depths’ U.K.-born, Israel-based founder.

The pergola at Praga district is one of countless sites scattered across Poland in which Jewish tombstones were used as construction material, according to Daniels, whose group earlier this year brought dozens of Israeli lawmakers to a meeting with counterparts from Poland and other countries, and a visit to the Auschwitz death camp on the 69th anniversary of its liberation.

“In the 1950s, the communists were in full swing of building structures and monuments out of matzevas, which they often broke into pieces,” Daniels said, using the Hebrew word for a Jewish tombstone.

From the Depths’ involvement in the subject is part of the organization’s Matzeva Project, which aims to restore an estimated one million gravestones hidden in buildings and urban spaces. The Jewish Historical Institute and the chief rabbi of Poland, Michael Schudrich, are official partners of the project.

An effort to locate headstones will begin this month with help from volunteers from the University of Warsaw. “Since we’ve started being interested in the question of matzevas used as a building material, there was a noticeable influx of information,” Daniels said, adding that his group is receiving calls and emails on a daily basis with information about tombstone and fragments that were used to make roads, walls, knife sharpeners and even toilets.