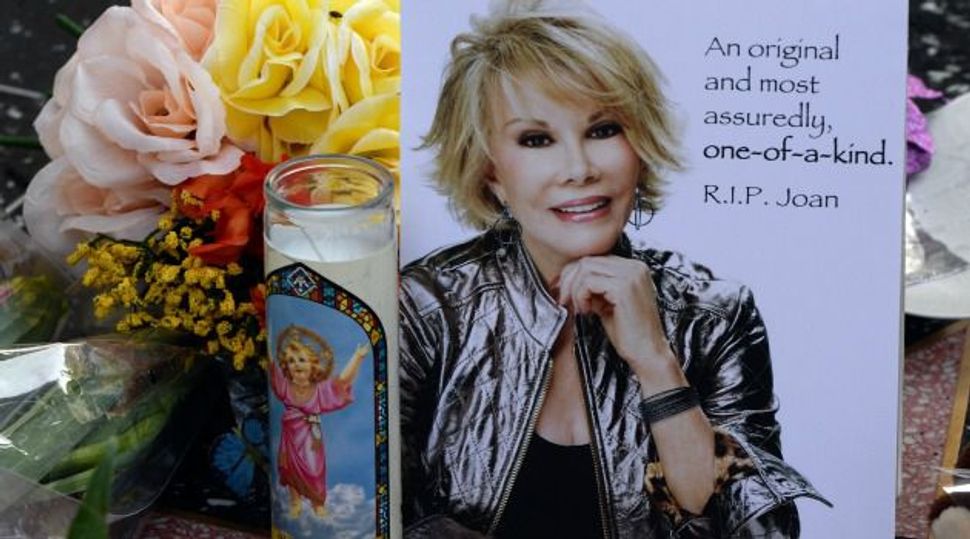 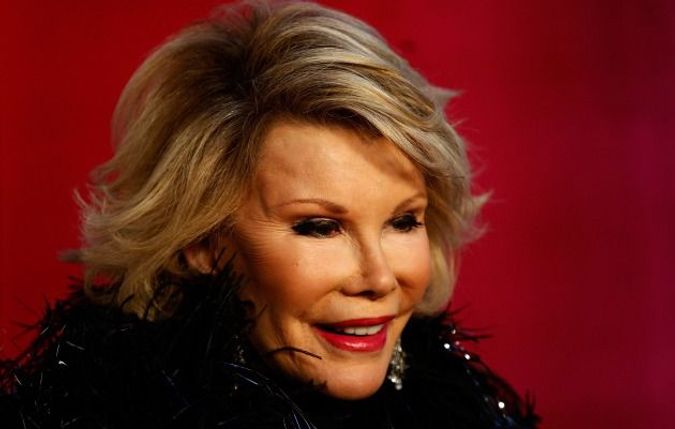 Family and friends gathered on Sunday to remember Joan Rivers, the outspoken comedian who became famous around the world for her acerbic wit and brash style, at a private ceremony in Manhattan.

Journalist Barbara Walters, comedian Whoopi Goldberg, tycoon Donald Trump, actress Sarah Jessica Parker were among the first to arrive for the invitation-only service at Temple Emanu-El, a landmark synagogue on New York’s Fifth Avenue where Rivers, 81, was a member of the congregation.

Hundreds of fans, along with dozens of reporters, photographers and television crews waited for the arrival of friends and family, including Rivers’ daughter Melissa.

“She was one of a kind. She was so terrific,” New Yorker Barbara Ness, 75, said about Rivers, who helped pave the road for women in comedy.

“She told it like it is, I loved her honesty, her sense of humor, her love for everyone, her charitable work that she did. She was terrific,” she added.

Max Buccini, 30, held flowers and praised Rivers for her generosity and the impact she had on the gay community.

“She always delivered. She knew her audience. She was a pioneer in the entertainment industry and just a trendsetter,” he said.

The sharp-tongued, Brooklyn-born comedian who jokingly wrote about wanting an elaborate funeral, died on Thursday at the New York hospital to where she had been rushed a week earlier. She had been put on life support after she stopped breathing during an outpatient procedure at a medical clinic.

The State Health Department was investigating the Yorkville Endoscopy Center where Rivers was treated. It is reviewing documents, medical records and interviewing staff and physicians at the clinic which opened in 2013.

During a career that spanned more than 50 years, Rivers was known for her brash style, numerous cosmetic procedures and the catchphrase “Can we talk?”

No topic or person was off-limits for Rivers, who joked about marriage and sex and was never apologetic about what she said.

She attributed her success to saying what everyone else was thinking. Her influence reached far beyond her New York roots. Tributes poured in from around the world.

Britain’s Prince Charles described Rivers, who attended his 2005 wedding to the Duchess of Cornwall, as “an extraordinary woman with an original and indefatigable spirit.”

Israeli President Benjamin Netanyahu said in a statement that she would be deeply missed.

“Joan Rivers brought laughter to millions around the world and was proud of her Jewish heritage and a vocal supporter of the State of Israel.”

Rivers started as a comedy writer and doing stand-up. She worked her way up to regular guest host for Johnny Carson on NBC’s popular “The Tonight Show.”

Carson and Rivers had a falling-out when she started her own late-night talk show in 1986 on the rival Fox network. Her show was canceled within a year due to low ratings. A few months later, her husband and manager, Edgar Rosenberg, committed suicide.

Later in her career, Rivers and her only daughter, Melissa, starred in the reality TV show “Joan & Melissa: Joan Knows Best?”, with Rivers living with her grown child.

Most recently, Rivers was the host of cable television channel E!’s “Fashion Police,” commenting on the unfortunate red carpet choices of Hollywood celebrities.