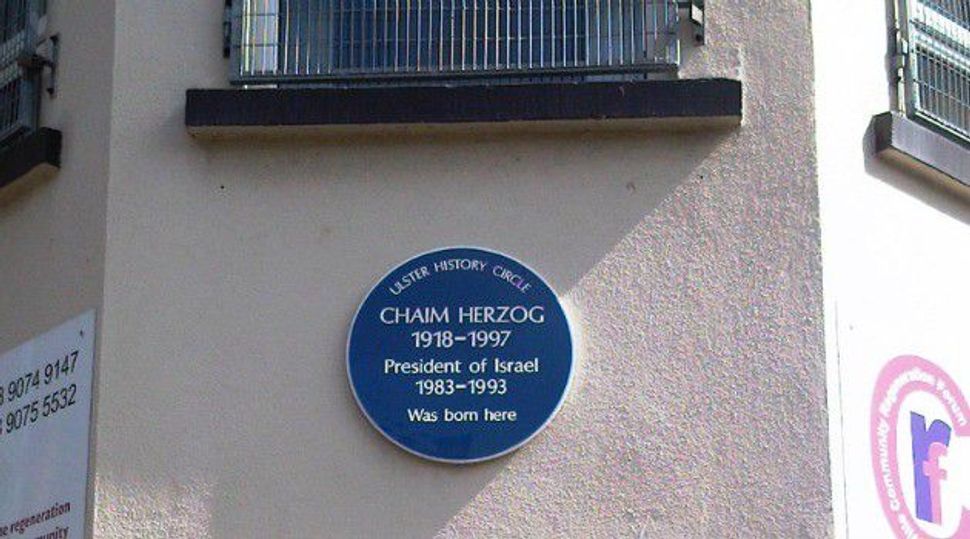 Several hundred residents of Belfast signed a petition asking their mayor to display a plaque honoring former Israeli president Chaim Herzog that was taken down this summer due to vandalism.

The monument on Cliftonpark Avenue, unveiled in the Northern Ireland city in 1998, was removed in August after repeated attempts to damage it.

Expressing shock and deploring “the erasure of an important aspect of Jewish history and culture in North Belfast following racist attacks,” the petition urges the mayor to display at Belfast City Hall the plaque, which used to be hung outside the home where Herzog was born.

“We call upon you as Lord Mayor of all the citizens of Belfast to demonstrate your commitment to diversity and inclusivity by inviting the Ulster History Circle to lend the plaque to Belfast City Hall for display until such time as it can be restored to the building where Chaim Herzog was born on Cliftonpark Avenue,” the petition read.

But in a reaction broadcast on Thursday by the BBC, Belfast Lord Mayor Nichola Mallon said doing so was not under her authority, explaining that the responsibility for the plaque ultimately lies with the Ulster History Circle, a nonprofit.

A spokesperson for that nonprofit told BBC that the circle “has yet to meet to discuss this issue,” and declined further comment.

Israel’s ambassador to Britain, Daniel Taub, also wrote this week about the plaque to the local government in Northern Ireland, to express “very deep concern” at the removal, the news site Ynet reported.

“This attempt to efface both Belfast’s Jewish past and its historic connection to the State of Israel is troubling because of what it says in relation to Israel and the Jewish community, but no less so because it suggests a lack of resolve or indifference to the consequences of allowing prejudice and hatred to fester,” he wrote.

Following the broadcast, James Martin, a spokesperson for the Board of Deputies of British Jews, said: “Now many thousands more are aware of the Herzog connection than when the thugs caused the plaque to come down.”