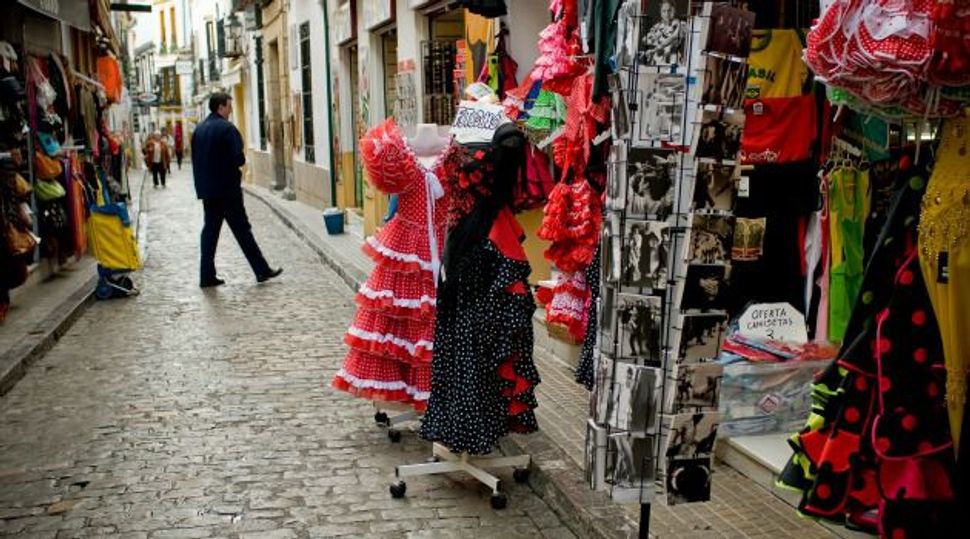 A shop in the Jewish quarter of Cordoba, Spain. Image by Getty Images

More than 25 Spanish cities launched a cultural program centered around their Jewish heritage in celebration of the 15th European Day of Jewish Culture.

Spain was one of about 30 countries marking the Jewish culture day on Sunday, which this year focused on women in Judaism.

The activities offered by Spain’s Red de Juderias, a national network of 26 cities where authorities have undertaken conservation and restoration of Jewish heritage sites, will focus during the week of Sept. 14 on the role of women in Jewish culture.

In Barcelona, the city is organizing a scientific conference led by the writer and translator Moriah Ferrus on the subject – part of a five-day program on Judaism which started on Sept. 13.

Opting for a less intellectual approach, the city of Cuenta organized a food fair to celebrate the gastronomical inventions of the Sephardic housewife. Many of the cities are offering concerts of Ladino music, with a special emphasis on music written and performed by women.

In Brussels, the day is being marked with the reopening of the Jewish Museum of Belgium, which has remained closed since the murder of four people there in May. A plaque commemorating the victims of the shooting was unveiled on Sept. 9. at the museum’s entrance. The previous day, the City of Brussels increased the museum’s annual budget for security from $6.500 to $38,000.

Belgian and French prosecutors said the murder was perpetrated by Mehdi Nemmoche, a French Muslim who is believed to have fought with jihadists in Syria. He is currently standing trial in Belgium.

In Italy, performances, exhibits, lectures, concerts, guided tours and other activities were organized Sunday in more than 70 towns and cities up and down the peninsula, including large Jewish culture festivals in Rome and Milan. “We believe that culture is the principal means to combat prejudice [and] help society grow and progress,” Renzo Gattegna, the president of the Union of Italian Jewish Communities, said. “We also want to demonstrate our solidarity with all the women who are victim of discrimination and harrassment and to denounce the inacceptable conditions in which women in many parts of the world live still today.”

In Belarus, the Jewish educational nonprofit Limmud FSU and the Israeli embassy in Minsk announced a plan to center the nonprofit’s next conference in the former Soviet country around the family history of former Israeli prime minister Golda Meir, who was born in what is now Ukraine but whose parents both hailed from Pinsk in Belarus.

The EDJC was founded in 2000 as an expansion and outgrowth of an “Open Doors” to Jewish heritage program in France. Each country’s programs are organized locally, with the overall theme loosely coordinated by the European Association for the Preservation and Promotion of Jewish Culture and Heritage, orAEPJ. Some countries, such as Italy, France, Germany, Spain and the UK program dozens of events; others, such as Bosnia-Hercegovina, Poland and Ireland only one or two.