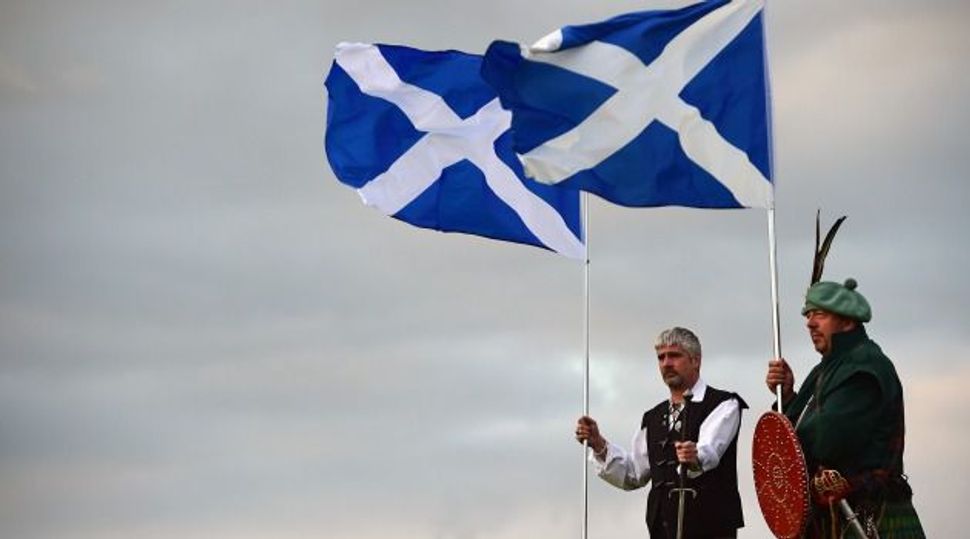 (JTA) — Bright blue signs scream “Yes” while red ones urge “No, thanks” in the streets of Scotland’s largest city just days before a vote on whether to secede from the United Kingdom.

But at Frank Angell’s house, his windows are empty and his yard is bare.

A former local council candidate for the Scottish National Party, the main political movement behind the independence push, Angell is a vocal supporter of the Yes campaign, attending rallies and touting the economic potential of an independent Scotland.

But in his local Jewish community, Angell is one of only a handful of supporters of independence.

Most of the affiliated Scottish Jewish community appears to want to remain part of the United Kingdom – among them Angell’s wife, Elaine. Hence the lack of signage on their lawn.

On Thursday, Scotland will vote on whether to become an independent country or continue more than three centuries of union with England. The campaign has proved a divisive one here, with recent polls showing the country nearly split evenly on the secession question.

Supporters of independence believe that Scotland would be better able to allocate resources to the local population as a separate country while leaving a smaller military footprint than the United Kingdom. Opponents argue that the country is better served by the U.K.’s greater global influence and worry about the financial and political uncertainties of independence.

“It’s historical, cultural, but also practical, economical,” Angell told JTA. “The way the economy has gone in Britain has been to pander to a very rich minority and allow a lot of tax avoidance. I also object to the money being spent on nuclear weapons because I’m anti-nuclear.”

Many Scottish Jews say they are wary of secession, citing anti-Israel statements by the Scottish government, historic and family links to the United Kingdom, and the potential economic risks of independence.

“The Jews in Scotland have been well received,” said Malcolm Livingstone, chairman of the Glasgow Jewish Community Trust. “It’s only in recent times that extreme Palestinian groups have upset that. The Scottish Parliament has shown serious signs of anti-Israel and anti-Jewish attitudes.”

Scotland’s 2011 census counted fewer than 6,000 Jews – about 0.1 percent of the population – most of them living in and around the industrial metropolis of Glasgow. Including unaffiliated Jews, the total could be more like 10,000, according to the Scottish Council of Jewish Communities director, Ephraim Borowski.

The community hasn’t been polled and Borowski’s group has no official position on the referendum. But he says official condemnations of Israel during the war in Gaza this summer may have pushed some Jews to oppose independence.

During the war, the Scottish government released eight statements criticizing Israel’s actions in Gaza. On Aug. 5, it called for an arms embargo against Israel to protest civilian deaths in Gaza. Glasgow’s City Hall flew the Palestinian flag for a day in August.

“I do know of people who have said explicitly that they intended to vote yes and now intend to vote no, and that’s connected with the much more explicit obsession with Israel and the Mideast,” Borowski told JTA.

The anti-Israel resolutions in Scotland have come alongside a spike in anti-Semitism here. More than 35 anti-Semitic acts occurred in July and August, according to Borowski’s group, compared to 14 in all of 2013. While the Scottish National Party, which is leading the independence charge, has condemned anti-Semitism, some Jews worry that nationalist feeling has encouraged it.

“Nationalism in Europe has not done well with the Jews,” Livingstone said. “I’m not suggesting for a minute that the SNP is like the nationalist parties in Germany, but within nationalist politics there’s always an element that tends to blame minorities for things that go wrong.”

“The foreign policy of an independent Scotland has yet to be written, but I know from the membership of our party that our attitude toward every nation and every group is a positive one,” said Vincent Waters, the SNP city councillor for Giffnock, a heavily Jewish Glasgow suburb. “We don’t have countries or ethnic populations that we favor one over the other.”

With a population of approximately 5.3 million, Scottish foreign policy isn’t likely to have a big impact on Israel. But Ben Freeman, 27, who grew up in Glasgow and founded an anti-discrimination nonprofit, says his country should support Israel as a matter of principle.

Some Scottish Jews says they feel more of a connection to Britain as a whole than to Scotland. Unlike Scottish families who can trace their lines back to the country’s ancient clans, many Jews came here in a wave of immigration from Eastern Europe only a century ago, 200 years after England and Scotland formed a political union in 1707.

“Perhaps being a fourth-generation immigrant I have a different attitude toward being Scottish. None of my family was here in 1707,” Joel Conn said. “There’s a lot more that makes us British than makes us Scottish.”

Jews who support independence cite parallels between the Jewish and Scottish stories. Scottish nationalists have desired independence since the earliest rebellions against English rule in the 1200s, much as Jews longed for Zion over centuries of living in exile. And like Judaism, Scotland’s Presbyterian ethos historically encouraged education and literacy.

Joe Goldblatt, a native Texan who moved to Scotland six years ago and gained citizenship in July, was passing out fliers supporting independence last week in Edinburgh. Approaching a mother with a baby in a stroller, Goldblatt offered a pin to the “wee bairn,” or little kid.

“What’s the basis for all Jewish thought? Freedom,” said Goldblatt, a professor at Queen Margaret University in Edinburgh. “It surprises me when my fellow Jews want to be shackled to the old political tissue, as if they’re saying, ‘The pharaoh has been pretty good so far. Let’s not rock the boat.’ “

Scotland’s Jewish population is declining as young people move to cities with larger Jewish communities in London, Manchester or Tel Aviv. Between 2001 and 2011, the community’s numbers declined nearly 10 percent.

But though many Jews oppose independence, Freeman doesn’t think a yes vote will cause a mass Jewish exodus.