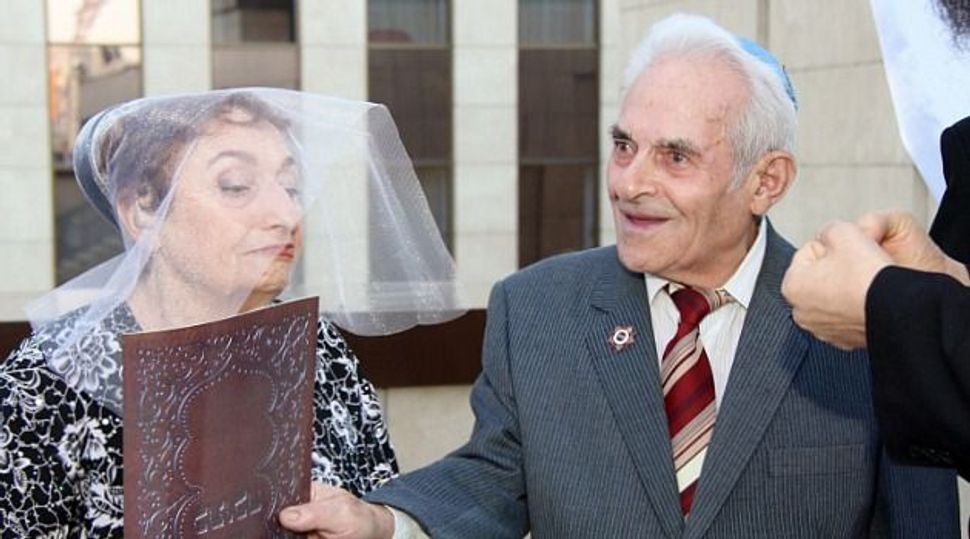 Liliya Menasheva Sadovski and Kim Boruchovitch were among 19 couples wed in Jewish ceremonies in Dnepropetrovsk’s Menora Center. Image by Jewish Community of Dnepropetrovsk

The Jewish community of Dnepropetrovsk in eastern Ukraine held a group wedding for 19 Jewish couples.

Most of the couples that wed Sunday were already married under Ukrainian law but had not had a Jewish wedding ceremony, or huppah, the director of the Dnepropetrovsk Jewish community, Zelig Brez, told JTA.

“It is a huge event in the spiritual sense, and, I’m not afraid to say it – historic,” he said, adding that the ceremonies were the largest group wedding performed in his city – where 50,000 Jews live – since before the communist era.

Ten rabbis conducted the marriages on a terrace at the Menora Center, Dnepropetrovsk’s $100 million Jewish community center, which opened in 2012. The couples received special preparation by Shmuel Kaminezki, the city’s chief rabbi and Chabad’s influential envoy to Ukraine, and his wife, Chana.

Under communism, Jewish life in the former Soviet Union was conducted underground, a reality that meant many Jews did not have a Jewish wedding. In many areas, a majority of Jews were not circumcised.

“The challenge was both logistical and halachic,” the community wrote in a report about the weddings. Special attention went to helping couples feel the moment in their own private context as opposed to a group activity, Brez explained.

For this reason, the weddings were conducted in two groups and not all at once – first for 10 couples and then for the remaining nine.

“It was something special, and I’m happy that I saw my daughter, in the presence of my grandchildren and great-grandchildren, finally get a huppah,” community activist Mina Dreitser said of the wedding of her daughter, Miriam Minutova, to Shlomo Skorokhod.