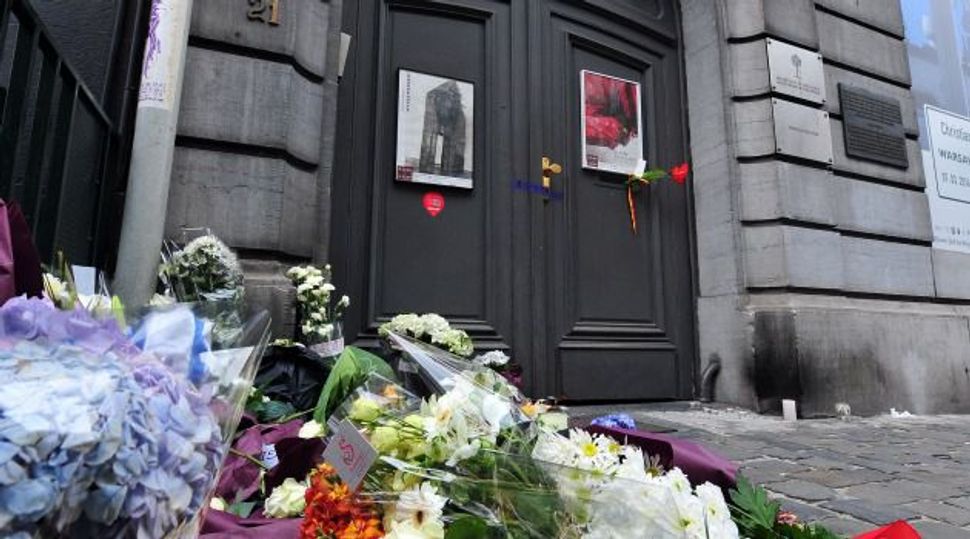 European authorities must provide greater security for Jewish institutions, a major Jewish organization said in the wake of a suspected arson attack on a Brussels synagogue.

“While it is unclear who was behind the attack, what is clear is that synagogues and other Jewish institutions have been placed on the front lines,” Dr. Moshe Kantor, president of the European Jewish Congress said in a statement issued hours after the attack on Tuesday,

Police said fire was deliberately set in four places in the synagogue on de la Clinique Street in Anderlecht, one of the municipalities that make up the Brussels region.

The wife and two children of the synagogue’s caretaker, who live in the building, were treated for smoke inhalation. The caretaker was not there at the time of the attack.

Tuesday’s attack, part of an increase across Europe in anti-Semitic attacks, was “born on May 24,” when a French gunman killed four people at the Jewish Museum of Belgium in Brussels, said Joel Rubinfeld, president of the Belgian League Against Anti-Semitism, or LBCA. The museum shooting, he added, is similar to a March 2012 attack on a Jewish school in Toulouse, France, which left three children and a rabbi dead.

“Whatever the motivation for this particular attack, incidents of this nature only serve to cause further distress to the Jewish Community both in Brussels and across Europe,” said Pinchas Goldschmidt, the president of the Conference of European Rabbis.

“Coming within months of the terrorist attack at a Brussels Museum and in the context of a spike in anti-Semetic attacks across Europe, this highlights the need for political leaders to take the strongest possible stance on anti-Semitism, following the example Chancellor (Angela) Merkel set in Berlin earlier this week,” he added, referring to her speech at a rally in Berlin against anti-Semitism, in which she said it was the German state’s duty to fight anti-Semitism.

Rabbi Menachem Margolin of the Chabad-affiliated Rabbinical Center of Europe in a statement called on Belgian Prime Minister Elio Di Rupo to increase security around the country’s Jewish institutions and to establish a national authority for combating anti-Semitism.

“Don’t wait for another murder,” he cautioned Di Rupo.

Meanwhile, Brussels lawmaker Alain Destexhe on Tuesday called on the government to develop a plan to fight against anti-Semitism following recent anti-Semtitic incidents.

“Anti-Semitism reached an intolerable level in our capital. Within three days, we have witnessed the burning of a synagogue, throwing missiles at the Jewish memorial visitors to Anderlecht, and anti-Semitic insults in a train in Jette,” he wrote on his Facebook page. He said the plan to fight anti-Semitism should be separate from other plans against racism.

On Sunday at the National Memorial Site for Jewish Victims of the Holocaust in Belgium, also in Anderlecht several people hurled large stones and a bottle at the monument where several dozen people were attending a ceremony.

Hours earlier, Di Rupo in an address at the reopening of the Jewish Museum of Belgium in central Brussels vowed to punish perpetrators of anti-Semitic crimes. “More than ever before, fighting anti-Semitism must truly become a national cause. At stake is our country’s honor and probably its future,” he said.

Tuesday’s attack in Brussels follows a recent attempted arson attack on a synagogue in Wuppertal, Germany, and the arrest of two Muslim girls who planned to blow up the Great Synagogue in Lyon, France.