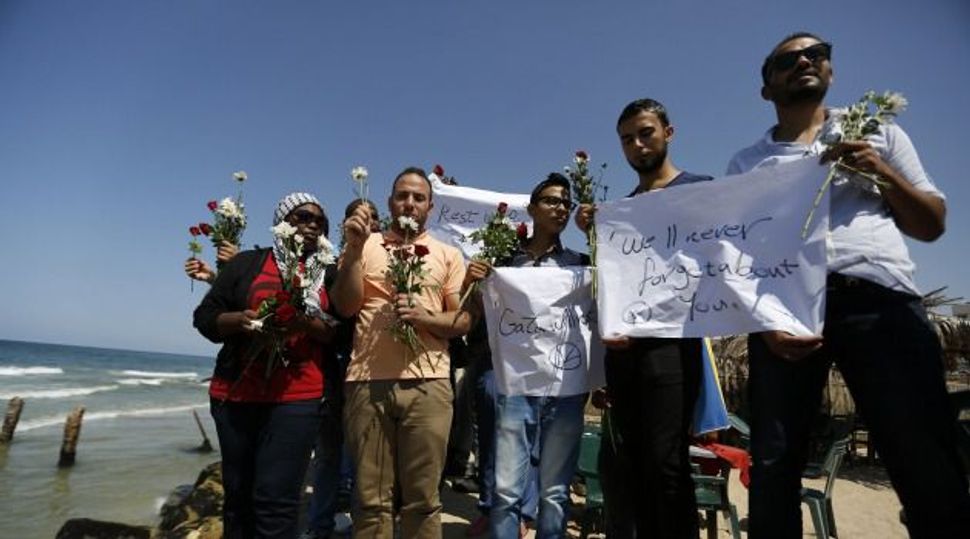 (Reuters) — A devastating war with Israel has swollen the number of Palestinians in the Gaza Strip joining a perilous exodus of migrants fleeing the Middle East and Africa in search of a better life in Europe.

Palestinians with knowledge of smuggling tunnels’ operations under the Egypt-Gaza border say between 1,500 and 2,000 Gazans have left the enclave in the past four or five months, looking to board boats in Egypt and escape across the Mediterranean sea.

Once just a trickle of individuals, groups comprising dozens of Palestinians started to flee during the July-August conflict that brought yet more misery and destruction to Gaza.

News that more than 700 African and Middle Eastern migrants had drowned in shipwrecks in the Mediterranean over the last week has raised alarm among Gazan families awaiting word that their loved ones had arrived safely.

“The number of people with whom families in Gaza have lost contact is around 400,” said Khalil Abu Shammal, director of the territory’s Ad-Dameer Association for Human Rights. “Measures are required to stop such travel towards death and the unknown.”

In the worst incident last week, as many as 500 migrants are believed to have died after traffickers rammed their ship off Malta’s coast, the International Organization for Migration said on Monday. Those on board included Palestinians, Syrians, Egyptians and Sudanese.

Samir Asfour, 57, from the southern Gaza town of Khan Younis, learnt about the death of his son, Ahmed, from a survivor who had seen him on a ship that sank on Sept. 10.

Ahmed, 25, was in Cairo seeking treatment from wounds caused by an Israeli missile attack in 2009 when he decided to join three of his cousins – who also died – and make the journey, the father said.

“(Friends) convinced him that in Germany he would receive better treatment,” Asfour told Reuters.

Both Israel and Egypt maintain blockades of the Gaza Strip, a territory of 1.8 million Palestinians that is dominated by Hamas, an Islamist movement which Israel and the West regard as a terrorist group and Cairo views with deep suspicion.

Unemployment in the territory, according to the World Bank, is around 50 percent, but many Palestinians in need receive aid from a U.N. agency tasked for decades with their welfare, meaning there is no generalized humanitarian crisis.

However, the recent war – the third major offensive Israel has mounted in Gaza since 2008 with the declared aim of halting cross-border rocket fire – has added to a sense of despair.

More than 2,100 Palestinians were killed, many of them civilians, local officials said, and tens of thousands of homes were damaged or destroyed in the fighting that also claimed the lives of 67 Israeli soldiers and six civilians in Israel.

Migrants have been streaming out of North Africa, mostly lawless Libya, in rickety boats in rising numbers for years. Many head for Italy, a gateway to the wealthy European Union.

Some 130,000 people have arrived in Europe by sea so far this year, compared with 60,000 last year, according to the UNHCR. Italy has received more than 118,000, most of them rescued at sea under its naval operation Mare Nostrum.

For Gazans, the journey begins by registering with tunnel owners who work as brokers for three Egypt-based smugglers. Passage under the border costs around $400, a bus ride to the Mediterranean port city of Alexandria, $800, and a place on the ship, $2,000, according to survivors and relatives of migrants.

Shukri al-Assouli, 33, set off from Alexandria on Sept. 6 with his wife and two children on a ship with 400 migrants on board that was destined for Italy. But the vessel sank and he was rescued by a Japanese commercial ship and taken to Greece.

His family is missing.

“All I want to hear right now is their voice: my wife, my daughter Retaj and my eight-month-old son Yamen,” Assouli said in a text message shared by his nephew in Sweden.