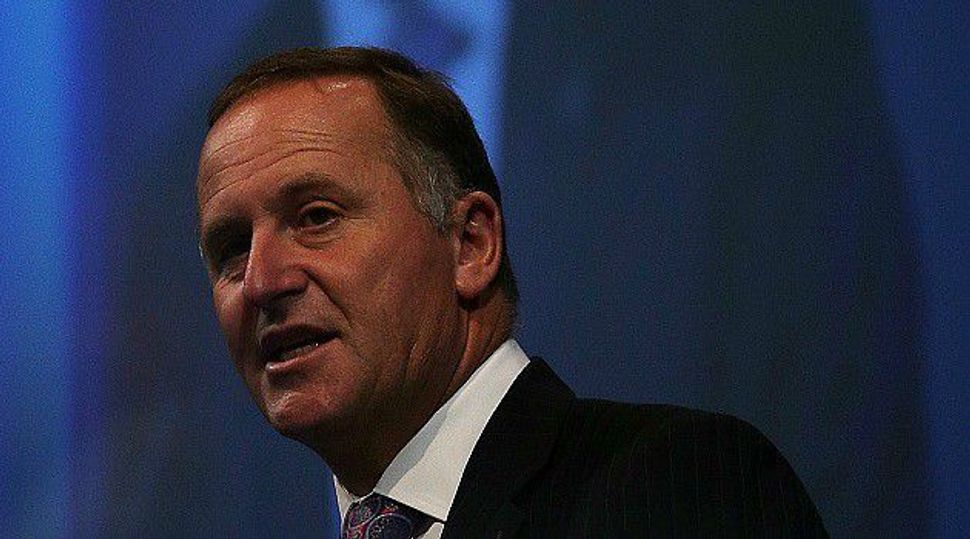 New Zealand Prime Minister John Key, the son of a Jewish refugee from Europe, was returned for a third term as leader of the South Pacific island nation.

Key, whose mother Ruth Lazar escaped Europe on the eve of the Holocaust, won an emphatic victory Saturday, enabling him to form a government without relying on coalition partners.

His National Party is projected to win 61 seats in the 121-member parliament, crushing the opposition Labor Party in large part thanks to its strong handling of the economy.

“I believe the Jewish community will be pleased with the result of yesterday’s election,” said Alison Dyson, president of the Jewish Federation of New Zealand. “The election centered mainly around economic policy and John Key’s roots would not have been a major factor in the vote amongst Jews or others.”

She added: “John Key’s government has in the past shown greater sympathy to Israel and the Jewish community than the previous [Labor] government and during the most recent conflict with Gaza the foreign affairs department was not very outspoken and was reasonably balanced in their comments.”

Although the local community of 7,000-plus Jews has not been afflicted by anti-Semitism to the same degree as European Jews, Dyson added: “There is an elevated sense of risk and insecurity, fuelled by some local events here during the Gaza pro-Palestinian protests, and further heightened by the awareness of rising anti-Semitism elsewhere.”

During the election campaign, several billboards were daubed with anti-Semitic graffiti, with one board carrying the words “Lying Jew cocksucker” alongside a defaced image of Key with a black hat and side locks.

Key, who is not a practicing Jew, said at the time he was disappointed for the Jewish community. “[They] don’t deserve to be brought into some sort of personal campaign that’s directed at me.”

Around the same time, Steve Gibson, a Labor candidate, posted a Facebook message describing Key as “Shonky Jonkey Shylock … a nasty little creep with a nasty evil and vindictive sneer.”

The post was later deleted; Gibson apologized and was censured by the Labor leader.

Israel’s Foreign Ministry said it could not approve Curr because he is also being credentialed to the Palestinian Authority.