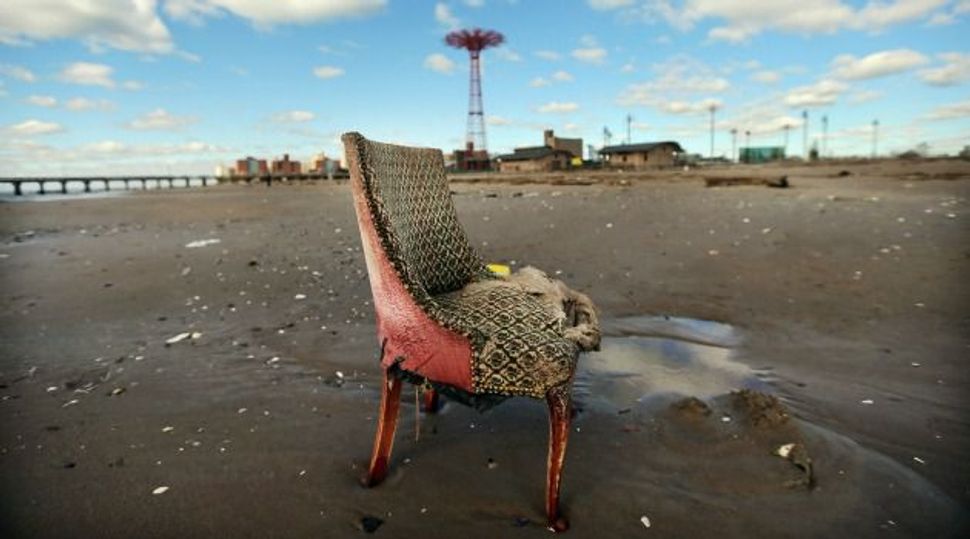 After the Storm: A damaged chair sits on the beach in Coney Island in the wake of Superstorm Sandy. Image by Getty Images

The Federal Emergency Management Agency originally allocated $1,860 to the council for the devastation its buildings received during the October 2013 hurricane. On Friday, FEMA allocated an additional $482,500.

“This is great news for the Jewish Community Council of Greater Coney Island,” said Sen. Kirsten Gillibrand (D-N.Y.), who, along with the New York Legal Assistance Group, worked with both the council and FEMA to obtain the much-needed funding. “I want to thank FEMA for realizing how important this investment is for the Jewish Community Council and the Coney Island community,” Gillibrand said in a statement.

Following that storm, only the outside structure of the Jewish Community Council of Greater Coney Island’s two main facilities was left standing. Three to six feet of water flooded the buildings leaving workstations, computers and kitchen equipment completely destroyed, with an estimated $1.5 million in damage. The council’s staff members were forced to relocate to six temporary facilities, severely impacting their ability to provide services for the community.

“Jewish Community Council of Greater Coney Island’s facilities were totally destroyed by Superstorm Sandy, leaving nothing intact other than the exterior walls and, inside, only sand,” said the council’s Executive Director Rabbi Moshe Wiener, who thanked Gillibrand and her staff for helping to secure the FEMA funding.