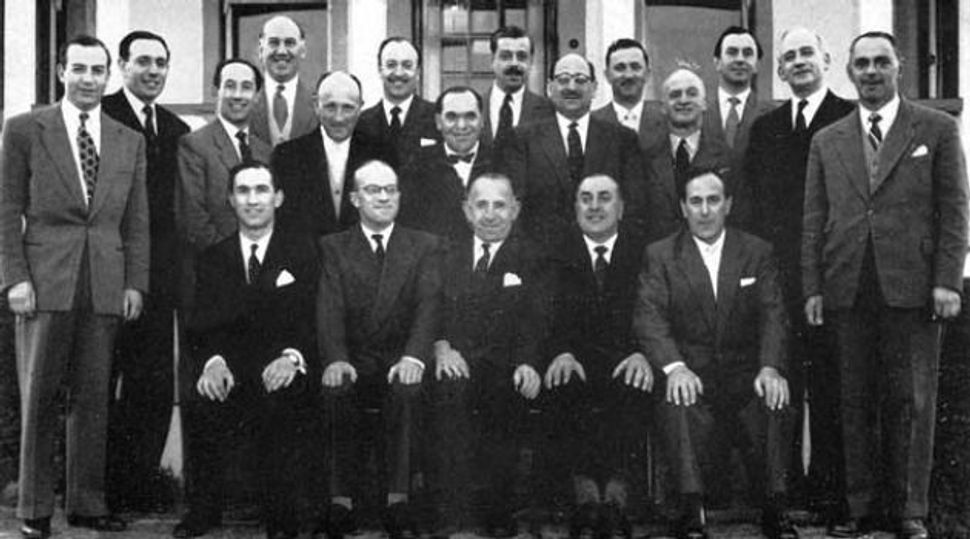 (JTA) — As teenagers in the 1960s, Lewis Geneen and Colin Black liked to spend their summer Sundays playing rounds at the Bonnyton Golf Club course, breaking only for a lunch of fish and borscht.

Sitting atop a hill on the outskirts of Glasgow, Bonnyton was then a social hub of the local Jewish community. Teenage boys would hang out on the links while older men rested from the course by playing cards in an upstairs room, sometimes gathering for a Mourner’s Kaddish to save a member a trip to the synagogue.

On Saturday nights, families who had congregated earlier in the day in synagogue would come to Bonnyton for what Geneen calls “a proper meal, an upmarket meal.”

Now in their 60s, Geneen and Black are still members of Bonnyton. But 50 years later the membership has changed, and with it the club’s character. Once almost exclusively Jewish, today only about 30 percent of the club’s approximately 700 members are Jewish.

The change is felt even on the clubhouse menu.

“It’s more pies and mints and, you know, goyish food,” said Geneen, 66. “You wouldn’t be able to have borscht and chopped fish. There’s no point in having it on the menu.”

It was in 1951 that a group of Jews began raising money for a private golf course; six years later they bought Bonnyton. At the time, Scottish clubs accepted members based on religion, and even Catholics and Protestants mostly played on different courses.

Excluded from both, Glasgow’s Jewish golfers were left to play their country’s national pastime at public courses, where they would hold an annual tournament to benefit the local Hebrew school.

Harvey Livingston, one of the club’s first teenage junior members, said Jewish golfers wanted the club as much for its course as for the high-class social life it offered.

“A private club is a better type of club, and you can socialize a lot more because there were so many people,” Livingston said. “Everybody knew that the other local clubs wouldn’t accept Jewish members.”

Bonnyton lies just beyond a sprawling suburb of Glasgow, at the end of a narrow, mile-long road flanked by grazing sheep and cows. A blue and white sign – nothing to do with Israel, the club’s chairman says – welcomes members to a clubhouse that was all but empty on a warm Tuesday morning. One club member, dressed in a blazer and slacks, sat in an armchair by a window looking out on a rolling course lined with evergreens. At the members-only restaurant, a lone server waited for golfers soon to return from a morning round.

The names on the trophies and plaques – Goldberg, Shenkin and Caplan mixed with Haggerty, McFarlane and Gilchrist – are the only clear hints of the club’s Jewish roots. Howard Beach, Bonnyton’s chairman, says the club’s location is what attracts members.

“It always was a local club,” Beach said. “There’s a very harmonious arrangement between Jews and non-Jews.”

In recent years, the club has had trouble attracting members of any kind. After the United Kingdom prohibited discrimination in club membership in the 1960s and ’70s, options widened for Jewish golfers, many of whom opted to play in clubs on the coast where the weather is better. Meanwhile, the wider Jewish population has been shrinking – by nearly 10 percent between 2001 and 2011, according to official government figures – a contraction also felt in Scotland’s synagogues and other community organizations.

But Bonnyton has been hit as well by a wider decline in golf club membership in Scotland. Since 2004, total membership at Scotland’s nearly 600 golf clubs has dropped by 17.5 percent, according to the Scottish Golf Union, a predicament the union blames on a bad economy and recent inclement summer weather.

In an interview last year with The Scotsman, the union’s chief executive, Hamish Grey, acknowledged that “consumer behavior is changing.” Golfers today are more likely to bounce among courses than become members of any one club.

Beach has tried to bring golfers into Bonnyton by offering discounted memberships and promotions. He has extended the junior membership up to age 30 and recently tried to attract members with an online coupon. But there’s only so much he can do.

“You have to be careful not to cheapen the offering,” Beach said. “If you don’t want to play on a good golf course, there are plenty of mediocre courses available to you.”

Confident in the course’s quality, Beach expects the club to weather its membership challenges even as other Scottish clubs may shutter. But even if it does persevere, what made Bonnyton a fixture of local Jewish life is unlikely to remain.

“You had to wander about playing golf in other people’s golf courses,” member Max Gold, 83, recalled. “This became our own golf club.”