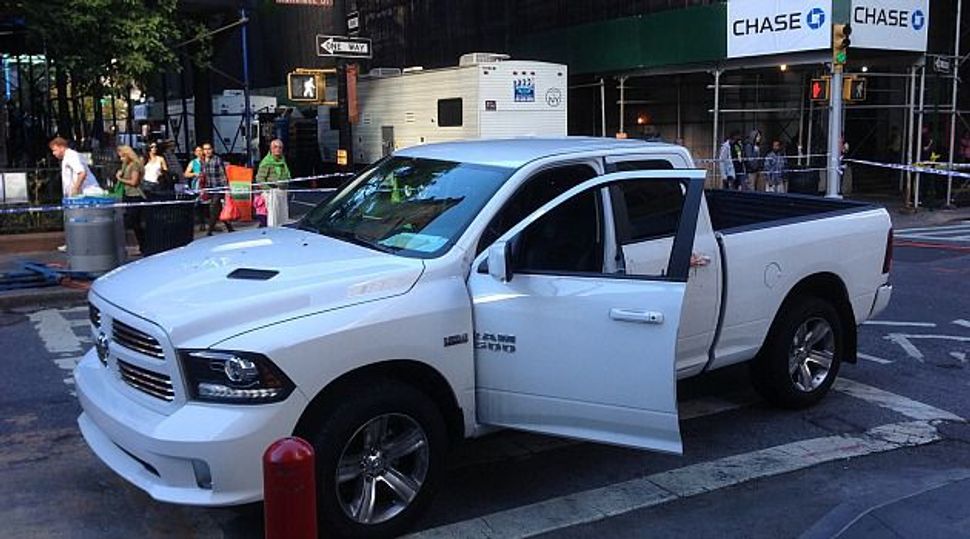 An Orthodox man was stabbed in Brooklyn Heights — reportedly by a disgruntled employee.

Hershy Feifer, described as an electrical contractor active in the Orthodox community and a clergy liaison to the New York Police Department, was attacked as he drove in the Brooklyn Heights neighborhood, where he was apparently working.

Feifer was rushed to the Lutheran Trauma Center after being attacked at approximately 1:30 p.m. Monday in the Brooklyn Heights neighborhood. His condition was not known.

“(The victim) jumped out of the car,” said Tim Wood, 49, a union worker who spotted the chaos. “He was screaming and yelling, and we thought at first that he might have gotten hit by the car mirror. It happened that fast.”

Wood saw Feifer pull over without properly parking his car. The attacker stabbed Feifer in the neck and fled the scene but was caught. Feifer got out of the car and walked a few meters before falling over.

Witness Avi Navon told the Brooklyn Eagle that he heard the attacker yelling at roughly 1:15 p.m. that he “wasn’t paid for two weeks.” Navon said he believed the man to be a worker at the construction site.

“I heard him arguing with the guy in the car,” Navon told the paper. “He took a knife, he stabbed him and ran away. I told people to catch him.”

Navon and other witnesses said the victim, who lay in the street next to traffic barriers that had been set up around the construction site, had been stabbed in the neck.

Alex Rapaport, director of the Masbia soup kitchen, described Feifer as a contractor and a generous member of the Orthodox community.

“After Hurricane Sandy he was very involved in helping people with pop-up evacuation centers or pop-up relief centers,” Rapaport said. “He worked around the clock getting people’s electricity back.”

“He’s a very happy person, good to have a conversation with,” Rapaport.

A spokesman for the NYPD confirmed to JTA that a stabbing occurred at the time and location reported.

An NYPD spokesman told JTA that the victim was stabbed in the neck and that a suspect, a 20-year-old man, was apprehended at the scene.

Adjacent to the crime scene, a new television series named “Mozart in the Jungle” was being filmed.