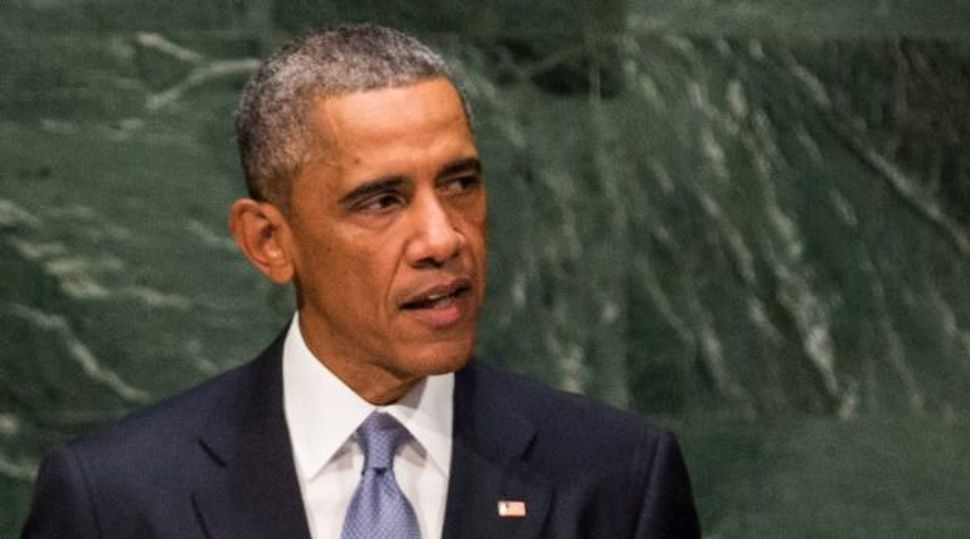 President Barack Obama lamented on Wednesday that “too many Israelis” were ready to abandon Middle East peace efforts and urged them to reflect on the matter, saying the status quo with the Palestinians was unsustainable.

As part of a broader speech to the United Nations Assembly, Obama appeared to gently chide close U.S. ally Israel against giving up on peace a week before he hosts Israeli Prime Minister Benjamin Netanyahu at the White House.

While Obama used his address primarily to rally support in the fight against Islamic State militants in Iraq and Syria, he also recommitted to the pursuit of a two-state solution between Israel and the Palestinians despite what he called a “bleak” landscape. U.S.- brokered negotiations collapsed in April.

“The violence engulfing the region today has made too many Israelis ready to abandon the hard work of peace,” Obama said. Then, departing from printed remarks made available to reporters beforehand, he added: “And that’s something worthy of reflection within Israel.”

“Because let’s be clear: the status quo in the West Bank and Gaza is not sustainable. We cannot afford to turn away from this effort – not when rockets are fired at innocent Israelis, or the lives of so many Palestinian children are taken from us in Gaza,” Obama said.

His comments followed a 50-day Gaza war between Israel and the Palestinian militant group Hamas that ended in late August with an Egyptian-brokered ceasefire and no clear victor.

Israel soon afterwards announced a land appropriation in the occupied West Bank that an anti-settlement group termed the biggest in 30 years, drawing Palestinian condemnation and a rebuke from its U.S. ally.

Since the Gaza war, Netanyahu has reaffirmed his bedrock demand that Western-backed Palestinian President Mahmoud Abbas back away from an April unity deal with Hamas Islamists that led Israel to quit the talks on peace and Palestinian statehood.

The conservative Israeli leader, who has a history of rocky relations with Obama, has also pointed to what he sees as the mounting dangers Israel faces from Islamic militants on its doorstep in Syria and elsewhere in the Middle East. Netanyahu will visit the White House on Oct. 1 after his own U.N. speech.

“Leadership will be necessary to address the conflict between Palestinians and Israelis,” Obama said. “”So long as I am president, we will stand up for the principle that Israelis, Palestinians, the region, and the world will be more just and more safe with two states living side by side, in peace and security.”

He also said violence in the Middle East should cure anyone of the illusion the Arab-Israeli conflict is the main source of the region’s troubles, calling such claims “an excuse to distract people from problems at home.”

The White House gave no explanation for the call for Israeli “reflection” that Obama inserted into his speech. “That message is consistent with what we’ve said for a long time about the status quo being unsustainable,” said Bernadette Meehan, a spokeswoman for the White House National Security Council.

While Obama in last year’s U.N. speech cited resolution of the Israeli-Palestinian conflict as one of the top priorities for the rest of his second term, he made no such assertion this time and also offered no new ideas for restarting negotiations.

Relations between Obama and Netanyahu have been strained amid tensions over failed peace moves and U.S. diplomacy with Iran, whose nuclear program Israelis view as an existential threat.

On a visit to the Oval Office in 2011 Netanyahu famously lectured the U.S. president on the long struggles of the Jewish people, as he sought to counter Obama’s call to base any peace agreement on borders that existed before the 1967 Arab-Israeli war.