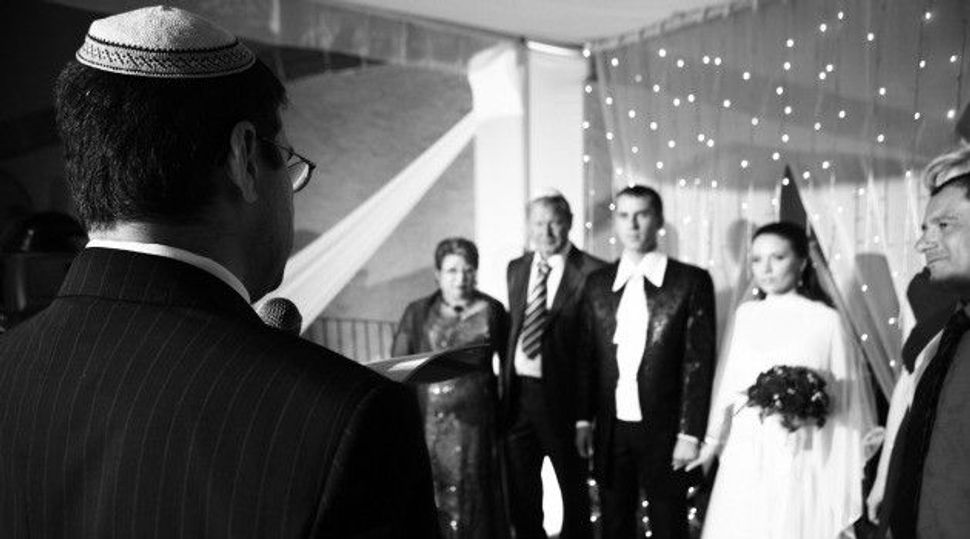 Not Jewish Enough? Maxim and Alina Serjukov had to move to another town in Israel after a rabbi rejected their efforts to convert.

(Religion News Service) — At Beit Daniel, a Reform synagogue in Israel’s secular metropolis, 75 members gather for the Friday evening Sabbath service, led by a female rabbi and a guitar-strumming cantor.

Long used to new faces and numerous Hebrew accents, the congregation these days is getting even more diverse.

That’s because even as Israel has welcomed immigrants since its founding — its Law of Return guarantees citizenship for immigrating Jews — the country is starting to make room for non-Jews who come in search of a livelihood.

“We come every Friday and feel like we are part of the congregation,” said Jennifer Yehuda, 33, who came to Israel in 1998 from Cavite, a town nine miles south of Manila, the Philippines. “These are warm and accepting people who make it possible for us to come here as foreigners and make us feel like we are at home.”

As Israelis pause to celebrate the Jewish New Year, known as Rosh Hashanah in Hebrew, they can also celebrate a surge in the number of non-Jews participating in conversion courses run by Israel’s Reform and Conservative movements. Both movements say registration has grown from several dozen to about 400 candidates annually.

For years, successive Israeli governments have wrangled over how to define who officially qualifies as a Jew, with the state-supported Orthodox rabbinate often making it impossible for non-Jews to become citizens.

But in 2002, a High Court decision mandated that the Interior Ministry accept Reform and Conservative conversion programs as valid for the purpose of registering people as Jewish citizens of Israel.

“The Orthodox rabbis want to check that you have separate sinks and dishes for meat and dairy,” said Vittorio Ishak, who joins Marlene, his Filipino-born wife, at the synagogue’s weekly conversion course. “Here the rabbi wants to check that you understand the meaning behind the prayers and customs.”

One of the largest non-Orthodox congregations in Israel, Beit Daniel, a three-campus Reform congregation, has seen its membership grow to 2,000 families, a tenfold increase in 10 years.

Last year, Beit Daniel certified 135 of the 200 conversions performed in Israel by the Reform movement. About one-third of these new Jews are of Filipino origin.

Another 100 people were converted to Judaism through the Conservative movement, known in Israel as the Masorti movement, said Rabbi Andrew Sacks, Israel director of the movement’s governing Rabbinical Assembly.

Sacks said his denomination’s communities are not seeing the same influx of Filipinos as the more liberal Reform.

Meanwhile, at Beit Daniel, Sadan said the congregation has been enriched spiritually by the diversity of new Jews entering the community.

“The converts and their spouses are breathing new air and giving energy to the synagogue,” said Sadan.

While those from the former Soviet Union states still constitute about half of all candidates for conversion, Filipinos have emerged as the second largest ethnic community in the conversion cohort at Beit Daniel.

The Philippine Embassy in Tel Aviv estimates that about 31,000 Filipinos live and work in Israel.

As Southeast Asians in a country where most immigrants are of European and Middle Eastern descent, the Filipinos are a highly visible new element in an increasingly diverse Reform Jewish community in Israel, which also includes gay couples.

They have not been uniformly welcomed. The Hebrew daily Haaretz recently published an internal Interior Ministry document demonstrating an official assessment that “too many” Filipinas are looking to marry Israeli men. The newspaper disclosed instructions to procedurally delay these marriages as they are based on “economic motivation.”

“This is not just about Filipino women,” said Sabin Hadad, spokeswoman for the Population and Migration Authority of the Israeli Ministry of Interior. “We also check on the Sudanese and Eritrean men seeking to marry Israeli women.”

Others, such as Nitzan Horowitz, a member of the Israeli Parliament, have suggested the Interior Ministry’s policies are racist.

“They make it difficult for people of color to come or stay here,” said Rabbi Sacks.

In contrast to many immigrants from the former Soviet Union with little knowledge of Judaism, the Filipinos come from a country steeped in religion, and Catholicism in particular.

“It is understandable that many of the Filipinos are participating in their services,” said Professor Zvi Zohar, a scholar at the Center for Halacha, at the Shalom Hartman Institute in Jerusalem. “They come from a country where people take their religion seriously. It is understandable that they are participating at a synagogue where they can sit with their husbands and children.”

Some say converting is only a formality.

“I grew up reading the Old Testament even more than the New Testament,” said Marlene Ishak, 53, who married Vittorio, 81, in a civil ceremony in Cyprus two years ago. “I’ve been living with Jewish families for years and have already been living as a Jew.”

Jacob Wirtschafter is a correspondent with Associated Reporters Abroad based in Israel.