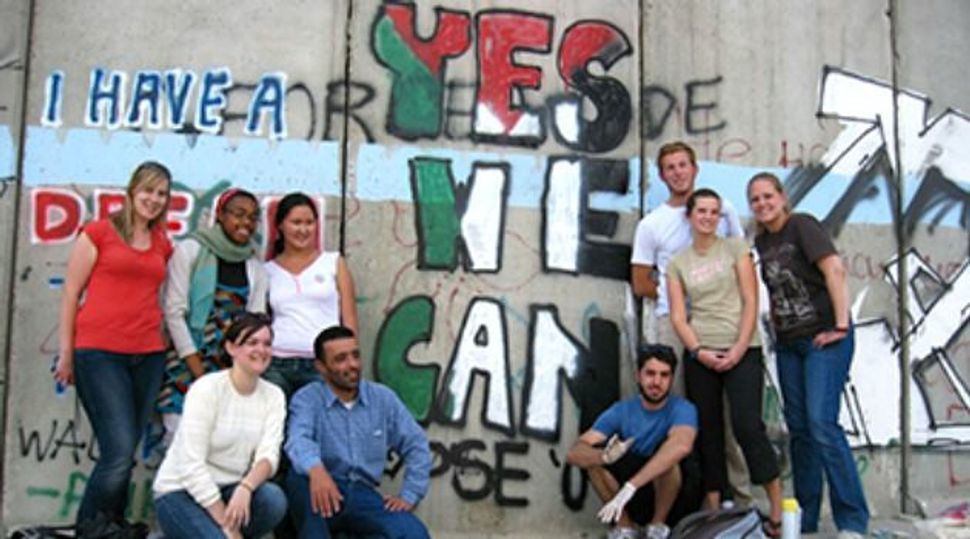 Dutch Drama: A pro-Israel association accused the Holy Land Trust, which offers Palestinian encounters like the one above, of funding Hamas. Image by Holy Land Trust

The schools of a Dutch town opted out of a charity campaign which municipal officials said collects funds for anti-Israeli groups.

All six schools in the town of Urk, located 20 miles northeast of Amsterdam, decided this year not to participate in a fundraising campaign organized by the Kinderpostzegels Association, the Omroep Flevoland broadcaster reported Thursday.

That day, a majority of members of the local council of Urk passed a motion calling for a boycott of the Kinderpostzegels initiative – a national drive in which children collect donations for what the association defines as “worthy causes” – because of reports that the money raised funds anti-Israel activity.

The motion followed a campaign calling for a boycott of the fundraising campaign mounted by Likoed Nederland, a pro-Israel association.

Likoed Nederland flagged one recipient of Kinderpostzegels donations, the Holy Land Trust, and said it gave resources to Hamas. The association responsible for the Kinderpostzegels campaign declined to answer Likoed Nedrland’s questions on how the money raised for Palestinian groups is used.

The pro-Israel groups also noted that Kinderpostzegels funds Defense for Children International, an organization which supports the boycott, divestment and sanctions movement against Israel.

On Thursday, the Kinderpostzegels Association posted a statement on its website, in which it denied funding anti-Israel groups including Hamas and said the group’s focus was on the welfare of children.

“One of our partners is the Holy Land Trust of Bethlehem,” the Dutch charitable association wrote. “This group gives training in non-violence. In 2006 the training was given to several Hamas members. The Kinderpostzegels Association however does not fund this training.”