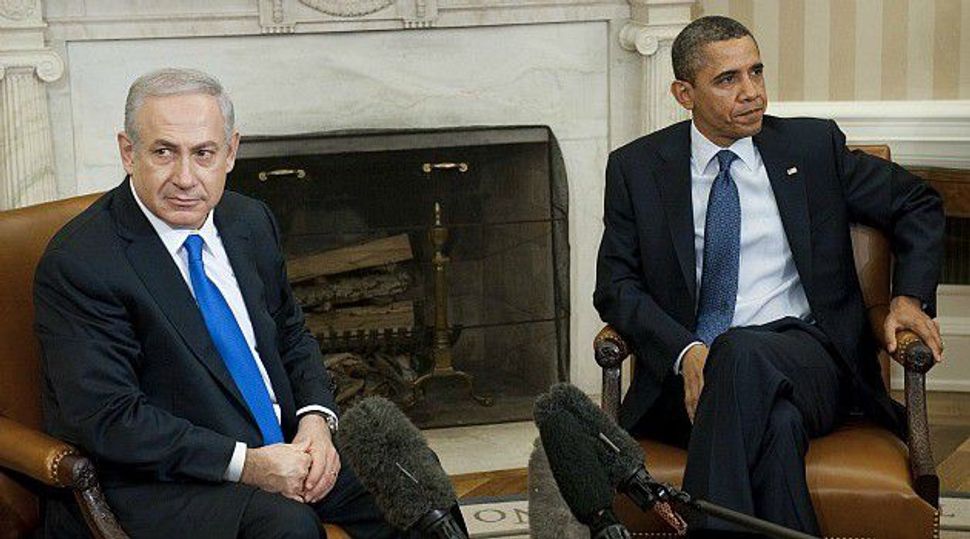 (Reuters) — President Barack Obama and Israel’s Benjamin Netanyahu meet for a new round in their often-tense relationship on Wednesday, facing differences over Iran diplomacy and Middle East peace efforts as well as complications from the U.S.-led fight against Islamic State militants.

Hosting the Israeli prime minister in a brief visit to Washington, Obama is expected to try to find common ground with Israel, a traditionally close ally, on the most pressing issues but may have a difficult time narrowing the gap.

Netanyahu has set Iran as his top priority in the White House talks. He will seek Obama’s assurance that he will stick to his pledge that “no deal is better than a bad deal” in Tehran’s nuclear talks with world powers aimed at reaching a final agreement in November, an Israeli official said.

While Obama probably will try to ease Netanyahu’s suspicions about diplomacy with Iran, the U.S. president will stop short of meeting the Israeli demand that Tehran be required to completely dismantle its nuclear capability under any comprehensive accord, a U.S. official said.

At the same time, Netanyahu is expected to use the Oval Office meeting to continue sounding the warning he issued in his speech at the United Nations this week – that a nuclear-armed Iran would pose a far greater threat than Islamic State fighters who have seized swathes of Syria and Iraq.

Though Israel backs Obama’s efforts to forge a coalition to confront Islamic State, some Israelis fear that world powers could go easy on Shi’ite Iran’s nuclear program so that it will help in the fight against the Sunni Islamist group.

“The president will make clear even with the international focus on combating ISIL, that this does not in any way lessen his commitment to preventing Iran from acquiring a nuclear weapon,” the U.S. official said.

There could also be lingering strains between Obama and Netanyahu in their first face-to-face meeting since the collapse of U.S.-sponsored peace talks with the Palestinians in April.

Washington has blamed both sides, but Israel has bristled over U.S. complaints that continued settlement building in the occupied West Bank contributed to the diplomatic failure.

Obama appeared to chide the right-wing premier, who has a history of rocky relations with the U.S. president, in his own U.N. address on Wednesday when he lamented that “too many Israelis” were ready to abandon peace efforts. He insisted that the status quo with the Palestinians was “unsustainable.”

Despite that, U.S. and Israeli officials alike may prefer to keep tensions under wraps for the relatively low-key visit.

Obama and Netanyahu are due to meet at 11:20 a.m. (1520 GMT), and their only joint appearance will be statements to a small pool of journalists at the end. The last thing the White House wants is a repetition of a 2011 Oval Office visit when Netanyahu famously lectured Obama on the long struggles of the Jewish people.

There is also little expectation that Obama will use the talks for any serious push for renewed negotiations in the aftermath of a 50-day Gaza war between Israel and the Hamas militants, which ended in August with no clear victor.

But the U.S. official said: “The top of our agenda (for the meeting) is current relations between Israel and the Palestinians, including the situation in Gaza.”

That is at odds with Netanyahu’s plan to focus first and foremost on Iran, whose nuclear program he considers an existential threat to Israel. Iran, Israel’s arch-foe in the region, denies it is seeking nuclear weapons capability. Israel is widely assumed to have the Middle East’s only atomic arsenal.

While Israel wants Iran stripped of its nuclear capability, Washington has left the door open to a deal that would allow Iran to retain limited uranium enrichment for civilian purposes.

“The prime minister won’t be making demands of Obama or asking for public clarification,” said the Israeli official, a participant in U.S.-Israeli discussions on Iran. “But given Israel’s worries about the direction of the negotiations with Iran, we would like to get reassurances.”

Iran and six world powers ended 10 days of talks in New York last week that made little progress in overcoming disagreements on issues such as the future scope of Tehran’s nuclear program and the speed of lifting sanctions. The talks are aimed at getting a long-term agreement by a Nov. 24 deadline.