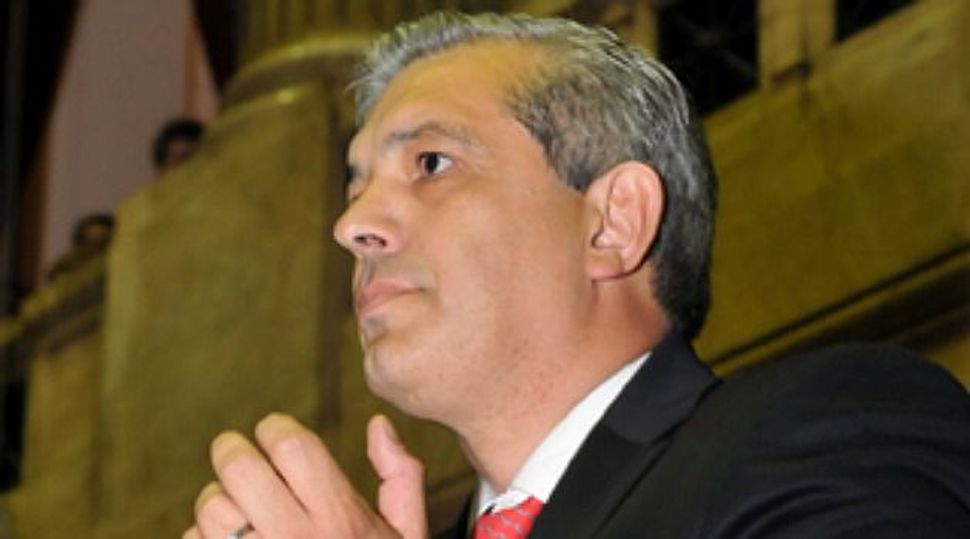 Julian Dominguez, Argentina’s president of the Chamber of Deputies. Image by wikipedia

A Jewish group is calling a Palestinian fundraising campaign at the Argentine Congress an endorsement of Hamas’ anti-Semitic hate and violence.

The Argentine Congress on Thursday will launch the campaign “Palestine Resists, Argentina Arises,” led by the president of the Friends of Palestine Parliamentary Group, Leonardo Grosso; the president of the Chamber of Deputies, Julian Domínguez, who also is a member of the ruling Victory Front Party; and the Palestinian Ambassador to Argentina, Walid Muaqqat.

The announced objective is to launch several fund-raising activities on behalf of “the zone affected by the military Operation Protective Edge.”

During the event, the documentary “Checkpoint Rock: Songs From Palestine” will be screened, and then a debate will be held lead by Pedro Brieger, the Jewish journalist that justified on National Public Television the killing of three Israeli teens by Hamas operatives in July.

In a letter to Argentine Congressman Dominguez, Dr. Shimon Samuels, director for International Relations for the Wiesenthal Center; and Sergio Widder the Center’s Director for Latin America, stated that “we stand in solidarity with those who have been victims of Hamas’ violence, whether Israeli or Palestinian”.

“Our Center favors humanitarian-aid initiatives to promote peace. But this is a campaign to abuse the goodwill of Argentine parliamentarians in order to endorse Hamas’ anti-Semitic hate and violence. There is nothing in the invitation program that indicates that there will also be a condemnation of Hamas’ anti-Semitic creed, expressed in its 1988 Charter, which calls for the murder Jews internationally and for the destruction of Israel, a state with which Argentina maintains friendly relations,” WIdder said.

“Israel’s measures to minimize civilian casualties –including telephone calls, leaflets and text messages calling for residents to vacate rocket launch zones – and its decision to keep transporting vital humanitarian aid to Gaza, even under fire, are unprecedented,” said Samuels. .

Hamas is designated a terrorist organization by the 28 member-states of the European Union, Australia, Canada, Egypt, Japan, Jordan, New Zealand, Saudi Arabia and the United States. “It was Hamas’ aggression –thousands of rockets launched upon unarmed civilians – that triggered Israel’s right to self-defense as guaranteed under the United Nations Charter,” Samuels said.

Copies of the letter to Congressman Julian Domínguez were sent to the Presidents of all Chamber of Deputies blocs.