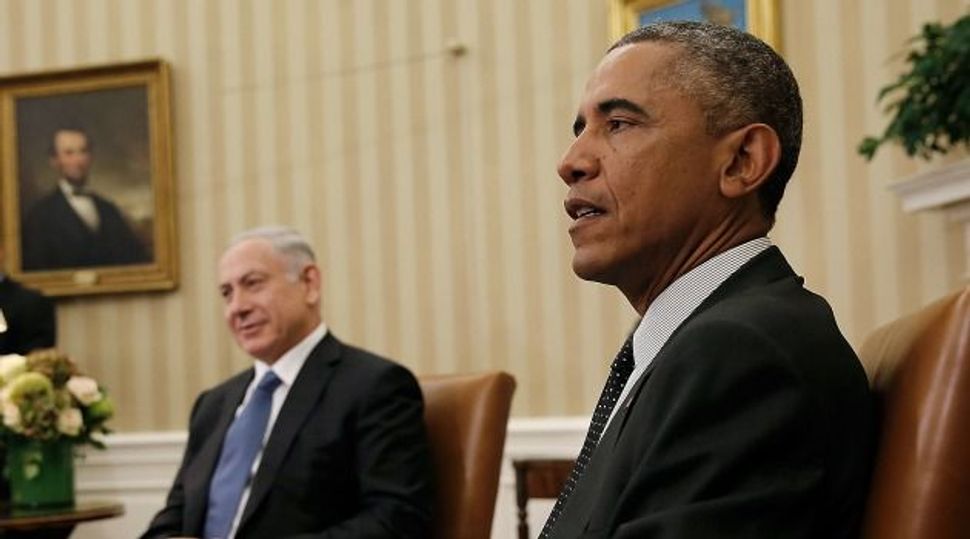 Israeli Prime Minister Benjamin Netanyahu bluntly told U.S. President Barack Obama on Wednesday that he must make sure that any final nuclear deal with Iran does not leave it at the “threshold” of being able to develop nuclear weapons.

Even as Netanyahu pressed Obama over Iran, the president urged the Israeli leader to help find ways to prevent Palestinian civilian casualties like those inflicted in the recent Gaza war between Israel and Hamas militants.

Meeting for the first time in eight months, the two leaders, who have a history of strained relations, avoided any direct verbal clash during a brief press appearance at the White House and even seemed in sync over the fight against Islamic State militants.

But they were unable to hide their differences on some of the issues that have stoked tension between them.

Underscoring Israeli misgivings at a critical juncture in nuclear talks between Iran and world powers, Netanyahu made clear that he remains at odds with Obama about the course of international negotiations with Israel’s regional arch-foe.

“As you know, Mr. President, Iran seeks a deal that would lift the tough sanctions that you worked so hard to put in place and leave it as a threshold nuclear power,” Netanyahu told Obama. “I firmly hope under your leadership that would not happen.”

The crux of the U.S.-Israeli disagreement is that Netanyahu wants Tehran completely stripped of its nuclear capability under any comprehensive accord, while Obama has suggested he is open to Iran continuing to enrich uranium on a limited basis for civilian purposes.

Obama spoke in only vague terms about Iran as the leaders began their private discussions, saying “progress was being made” in dealing with Tehran’s nuclear program.

While Netanyahu put the emphasis on Iran, Obama was quick to focus on the bloody 55-day Gaza conflict, which ended in August with no clear victor. This followed the collapse of U.S.-sponsored peace talks between Israel and Palestinians in April.

“We have to find ways to change the status quo so that both Israeli citizens are safe in their own homes and school children in their schools from the possibility of rocket fire, but also that we don’t have the tragedy of Palestinian children being killed as well,” Obama said.

The Obama administration had backed Israel’s right to defend itself against Hamas cross-border rocket fire during the conflict, but also voiced rare criticism of Israeli military tactics as Palestinian civilian casualties mounted.

The conflict devastated some Gaza districts and killed more than 2,100 Palestinians, mostly civilians, according to the Gaza health ministry. Sixty-seven Israeli soldiers and six civilians in Israel were killed.

THINKING ‘OUTSIDE THE BOX’

Netanyahu said he remained “committed to a vision of peace for two states for two peoples” based on arrangements for Israel’s security. But he did not offer any path toward restarting negotiations with the Palestinians.

Instead, he suggested there was a need to “think outside the box” and recruit moderate Arab states to “build a positive program” to advance peace and security in the region, though he offered no specifics.

Palestinians have dismissed this approach as an attempt to circumvent direct talks.

The two leaders showed no outright tension as they sat side-by-side in the Oval Office. Both were cordial and businesslike, even shaking hands after Obama delivered his statement.

The last thing the White House wanted was a repetition of a 2011 Oval Office visit when Netanyahu lectured Obama on the long struggles of the Jewish people.

But even with calm words, there was little doubt about the lingering differences.

Netanyahu was expected to use the Oval Office meeting to continue sounding the warning he issued in his speech at the United Nations this week – that a nuclear-armed Iran would pose a far greater threat than Islamic State fighters who have seized swathes of Syria and Iraq. An Iranian U.N. delegate accused Netanyahu of “propagating Iranophobia and Islamophobia.”

Though Israel backs Obama’s efforts to forge a coalition to confront Islamic State, some Israelis fear that world powers could go easy on Shi’ite Iran’s nuclear program so it will help in the fight against the Sunni Islamist group.

In Wednesday’s talks, Netanyahu was clearly intent on keeping the focus on Iran, whose nuclear program he considers an existential threat to Israel. Iran denies it is seeking nuclear weapons capability.

Israel is widely assumed to have the Middle East’s only atomic arsenal.

An Israeli official said earlier that Netanyahu wanted “reassurances” from Obama that he would hold to his pledge that he would rather have no deal than a “bad deal” with Iran.

Iran and six world powers ended 10 days of talks in New York last week that made little progress in overcoming disagreements on issues such as the future scope of Tehran’s nuclear program and the speed of lifting sanctions. The talks are aimed at getting a long-term agreement by a November 24 deadline.