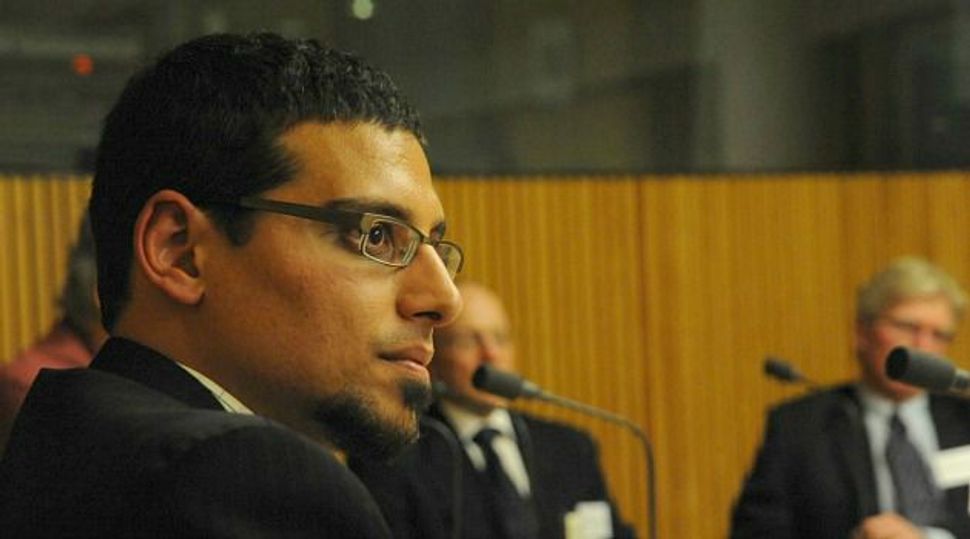 Face of Scandal: Manny Waks, an advocate for child abuse victims in Australia, appears at hearing about scandal.

The wife of the Brooklyn-born chief rabbi of Chabad in Sydney apologized unreservedly for offending a child sex abuse victim on the eve of Yom Kippur.

Pnina Feldman sent an email on Oct. 3 to Manny Waks, the only Jewish child sex abuse victim in Australia to have gone public. “I haven’t met a person yet with one nice word to say about you,” she wrote. “Most people consider you a lowlife.”

Feldman was prompted to send her email after she had received a request to support a petition calling on two senior Chabad leaders in Melbourne to resign from their positions over the child sex abuse scandal that embroiled Chabad’s Yeshivah College in the 1980s and 1990s.

In her email, Feldman, whose husband Pinchus was sent as an emissary to Sydney by the Lubavitcher Rebbe in the 1960s, also accused Waks of waging a “malicious blame game” against Yeshivah that is “unjust, unwarranted, undeserved and wicked.”

Waks released Feldman’s email to the media after he received it. “I’m truly shocked and horrified that Rebbetzin Feldman has deliberately chosen the eve of Yom Kippur … to launch an unprovoked, vile and offensive tirade against me,” he wrote.

Feldman apologized Monday, stressing she had written a “private” email to Waks. “In my robust and emotional email I employed offensive language which I remorsefully regret and unreservedly apologize for,” she wrote. “I agree with all efforts to prosecute pedophiles but take issue with some aspects of Manny’s crusade against Melbourne Yeshivah,” she said.

She added: “I also want to apologize for any perceived trivialization of the impact of child abuse on victims.” In 2012, Yeshivah in Melbourne apologized “unreservedly” to victims of child sexual abuse but the scandal continues to smolder within the Jewish community.

Senior rabbis will be called to testify before the ongoing Royal Commission into institutional responses to child sexual abuse, the Melbourne Age newspaper recently revealed.