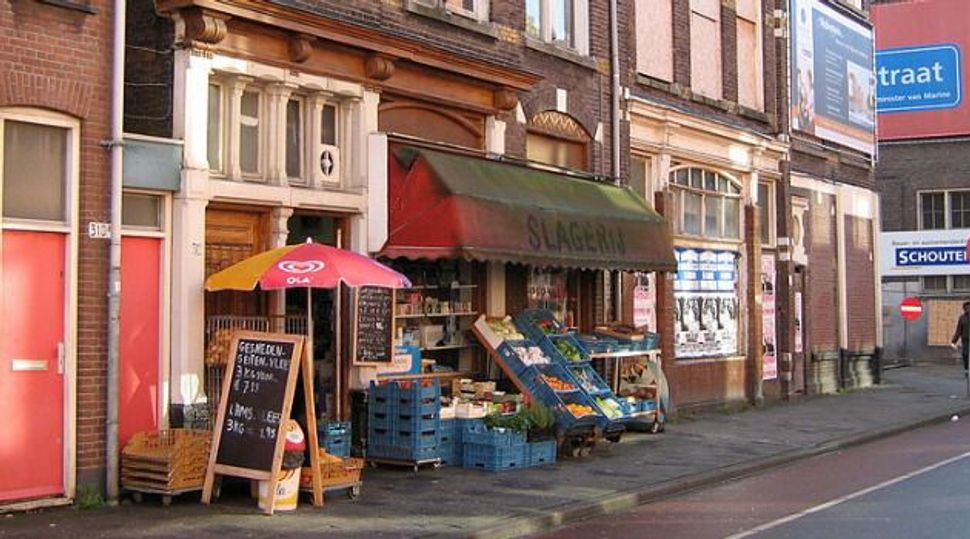 A street scene in Schilderswijk, the neighborhood in The Hague where a Jewish resident’s efforts to erect a sukkah have sparked controversy. Image by wikipedia

(JTA) — For the tour guides that lead visitors through the Van Ostade Housing Project, Fabrice Schomberg’s sukkah is one of the few signs of the neighborhood’s Jewish roots.

Built in the 19th century for impoverished Jews, the enclave today is surrounded by the largely Muslim neighborhood of Schilderswijk, an area that the Dutch media have taken to calling the “Sharia Triangle,” referring to Islamic religious law.

Fewer than 10 Jewish residents remain and, aside from Schomberg’s sukkah, there are virtually no markers of the area’s Jewish past. Now even the sukkah’s fate is in doubt.

After weeks of negotiation with the city, Schomberg was informed that he could build his sukkah only on condition that he dismantle it by 9 o’clock each night. According to Schomberg, the police had advised the city against allowing a sukkah at all, since it might invite Muslim vandalism.

To Schomberg and his supporters, the city’s reluctance to allow a sukkah in Van Ostade is emblematic of the Dutch approach to the rise of Muslim fundamentalism — urging targeted communities to keep a low profile rather than standing up for individual freedoms. But others fault Schomberg, alleging that he has used religion to stir conflict at the community’s expense.

“Resistance to my sukkah is not just about building permits,” said Schomberg, a British-born artist who has erected a sukkah outside his door for the past three years. “There’s a wider context.”

That context includes three demonstrations this summer, all featuring flags of the ISIS jihadist group; two included calls to murder Jews. A few dozen people attended each of the rallies. The city has since banned all demonstrations in Schilderswijk.

Schomberg was himself verbally assaulted in Schilderswijk while in the presence of a film crew that he had invited to see what happens when he wears his yarmulke in public.

“Advertising one’s Judaism is dangerous here,” said one Jewish resident who asked to remain anonymous to protect her safety. “I don’t wear any Jewish symbol on the street and I installed my mezuzah on the inside.”

Despite these concerns, she supports Schomberg’s fight to build a sukkah and said she plans to visit the sukkah over the Sukkot holiday, which begins Wednesday at sundown.

Police and city officials would neither confirm nor deny Schomberg’s claim that police had advised the city to deny the sukkah permit, nor would they answer questions about the level of risk facing Jews in Schilderswijk. The city also would not say why Schomberg must dismantle the temporary holiday dwelling at night.

Schomberg, who has appeared several times in Dutch media this summer because of the “kippah walks” against anti-Semitism that he organized in Schilderswijk, says his sukkah helps build bridges to non-Jews whom he invites as guests.

But some Jews who know Schomberg describe him as a troublemaker who is endangering the community, citing the invitation he extended to the stridently anti-Muslim Dutch politician Geert Wilders to visit his sukkah.

In September, the board of the Jewish Community of The Hague informed Schomberg that he was banned from entering any of the city’s Orthodox synagogues until 2016 because “his behavior has endangered the community.” Schomberg said he was told by the Reform community that he was not welcome there either.

In an attempt to reverse the ban, Schomberg launched an online petition that has collected 31 signatures, but it also drew criticism from some of his detractors.

“Mr. Schomberg’s actions, past and present, as well as his constant media-seeking behavior do not reflect any concern for the safety of any [Jewish] groups,” a member of the Orthodox community, Stephanie Baumgarten-Kustner, wrote on his petition last week. “In fact his behavior puts the entire Jewish community in the Hague (and the Netherlands) at risk.”

Other critics say they fear Schomberg will use the sukkah to advance a political agenda, though Schomberg denies having one. He insists that his pariah status is born of the fact that he suffers from bipolar disorder and is intent on countering the community’s desire to keep a low profile.