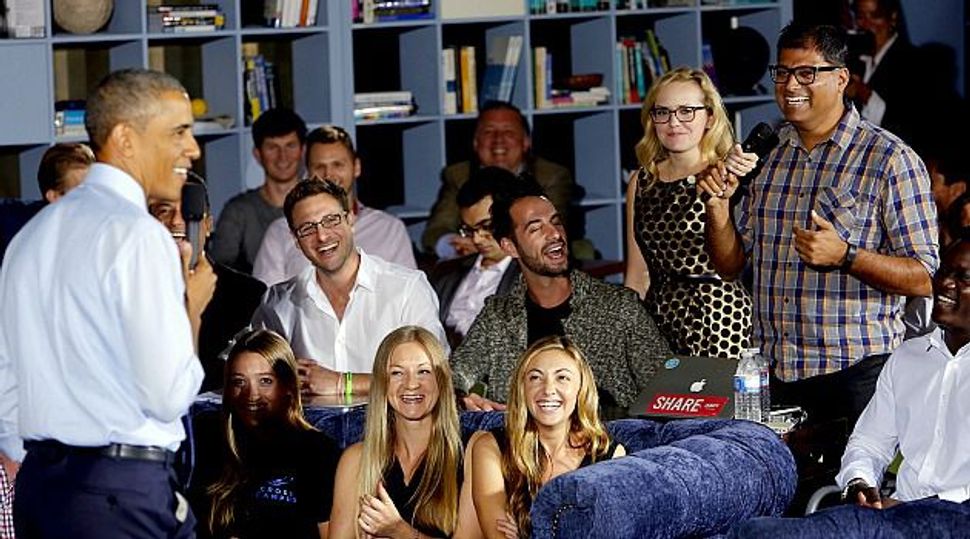 ‘What Are the Perks? President Barack Obama jokes with Sensay CEO after the tech billionaire offered him a job — presumably once he leaves the White House. Image by getty images

President Barack Obama got an unexpected job offer from a tech executive and a compliment from actress Gwyneth Paltrow to start a two-day West Coast swing aimed at raising money to blunt Republicans’ drive to win the Senate in Nov. 4 elections.

Obama was the headliner at a Democratic fundraising event at the expansive Brentwood, California, home of Paltrow, who introduced Obama to a crowd of about 200 people on her back lawn by telling the president, “You’re so handsome that I can’t speak properly.”

“I’d like to thank Gwyneth and Apple and Moses for letting us crash your house,” Obama told Paltrow and her two children before launching into his standard fund-raising speech.

During this event, Obama also got a job offer when Ariel Jalali of the Sensay startup app company stood up to ask a question but instead told the president he wanted to get a “jump on the competition in offering you your next gig.”

“You can help anyone from anywhere using your – nothing more than your brain and a smartphone, and you can do it anonymously. So, what do you think?” Jalali replied.

Obama, who has two years left in his second four-year term, offered that eight years was probably enough time to serve as president and that thinking about issues of the day while wearing sweatpants and a baseball cap “sounds pretty attractive.”

On immigration, Obama said he would proceed with plans after the elections to do what he can within his constitutional power to help undocumented workers in the United States.

He said he would specifically make the H1B visa system more efficient “to encourage more folks to stay here.”

Obama held back from issuing executive actions on immigration at the end of the summer because of public discontent with how he was handling a surge of child migrants who swept across the U.S. southern border. Obama suggested this problem was largely under control.

He said a failure to act on comprehensive legislation by Republicans will damage them with an important voting bloc.

“If they were thinking long-term politically, it is suicide for them not to do this, because the demographics of the country are such where you are going to lose an entire generation of immigrants” who feel that the Republican Party “does not care about me or my life,” Obama said.

Obama said Tea Party conservatives are pressuring the Republican rank and file not to take action in the short run, but that he believes reform legislation will eventually pass while he is still president.