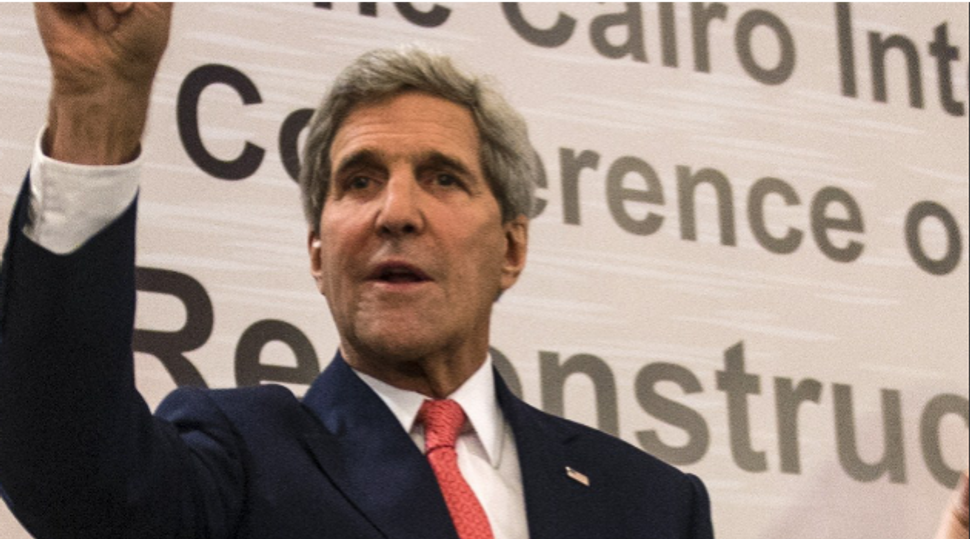 Secretary of State John Kerry called on Sunday for a renewed commitment to achieving Middle East peace, saying a lasting deal between Israel, the Palestinians and all their neighbors was possible.

But prospects for a renewed peace process appeared dim as Kerry offered no specifics on how to restart negotiations in his speech to a Gaza reconstruction conference that raised more than $5 billion in aid for the Palestinians after a devastating war in the tiny coastal territory.

The last round of U.S.-brokered peace talks foundered in April over Israeli objections to a Palestinian political unity pact that included the Islamist Hamas movement and over Palestinian opposition to Israeli settlement expansion.

“Out of this conference must come not just money but a renewed commitment from everybody to work for peace that meets the aspirations of all, for Israelis, for Palestinians, for all people of this region,” Kerry told the meeting in Cairo.

“And I promise you the full commitment of President (Barack)Obama, myself and the United States to try to do that,” he said.

“Make no mistake: What was compelling about a two-state solution a year ago is even more compelling today,” added Kerry, referring to the long-term goal of an independent, democratic Palestinian state living peacefully alongside Israel.

At the conference Kerry also announced an additional $212 million in U.S. aid to Palestinians in the Gaza Strip, which was badly damaged during a conflict with Israel in July and August in which 2,100 Palestinians died, most of them civilians.

An estimated 18,000 homes and vital infrastructure were destroyed in the seven-week war between Israel and the Palestinian Islamist militant group Hamas.

The Palestinians have put the cost of reconstruction at about $4 billion and Norway’s Foreign Minister Borge Brende said the conference had secured $5.4 billion in aid, half of which would be used for rebuilding Gaza and the rest could go to other Palestinian areas.

Dozens of countries attended the Cairo meeting where a clear message emerged: pledges and picking up the pieces after fighting is not the solution, and a comprehensive Middle East peace deal is needed to end hostilities once and for all.

“A ceasefire is not peace, and we’ve got to find a way to get back to the table and help people make tough choices, real choices,” said Kerry.

“Choices that everybody in this room and outside of it understands have been on the table for too long.”

The small but ambitious Gulf Arab state’s close ties to Hamas, an offshoot of the Brotherhood, also angered Egypt, which is influential across the Arab world. Israel and the United States consider Hamas a terrorist organization.

When journalists were allowed in briefly for the start of one-on-one talks in a Cairo suburb, Kerry was overheard asking Palestinian President Mahmoud Abbas: “Did you hear about Qatar?” presumably referring to the $1 billion pledge.

EU foreign policy chief Catherine Ashton said pledges from the bloc’s 28 member states would reach 450 million euros. It was not immediately clear whether the sum included the separate contributions announced by Germany, France and Britain.

“We can’t allow people in Gaza to sink into despair,” German Foreign Minister Frank-Walter Steinmeier said in a statement.

Egypt, which brokered the current ceasefire between Israel and the Palestinians in August, used the Cairo conference to renew its call for a wider Middle East peace deal based on a 2002 Arab initiative, which Israel has rejected.

“We should turn this moment into a real starting point to achieve a peace that secures stability and flourishing and renders the dream of coexistence a reality, and this is the vision of the Arab peace initiative,” Sisi, now Egypt’s elected president, said in his opening speech.

The Arab peace initiative was floated by Saudi Arabia in 2002 and offers full recognition of the Jewish state, but only if it gives up all land seized in the 1967 Middle East war and agrees to a “just solution” for Palestinian refugees.

Abbas said in Cairo the Arab plan could be the framework for a new approach to the Palestinian-Israeli conflict.

Successive Israeli governments have rejected the Arab initiative but Prime Minister Benjamin Netanyahu recently suggested a greater role for Israel’s Arab neighbors in the pursuit of peace. Netanyahu has shown little, if any, appetite for concessions toward the Palestinians.

In his White House talks with Obama this month, he made clear that his priority was to prevent the United States and other world powers from going easy on Iran, Israel’s regional arch-foe, in nuclear talks that are entering a critical phase.

Netanyahu says a nuclear-armed Iran would pose a greater threat than Islamic State fighters who have seized swathes of Iraq and Syria.

Israel was not represented at the conference, but some of the speakers pressed for it to do more to change the status quo with the Palestinians.

U.N Secretary-General Ban Ki-moon told the conference: “We must not lose sight of the … causes of the recent hostilities, of a certain occupation that has lasted almost half a century, the continued denial of Palestinian rights and the lack of tangible progress in peace negotiations.”