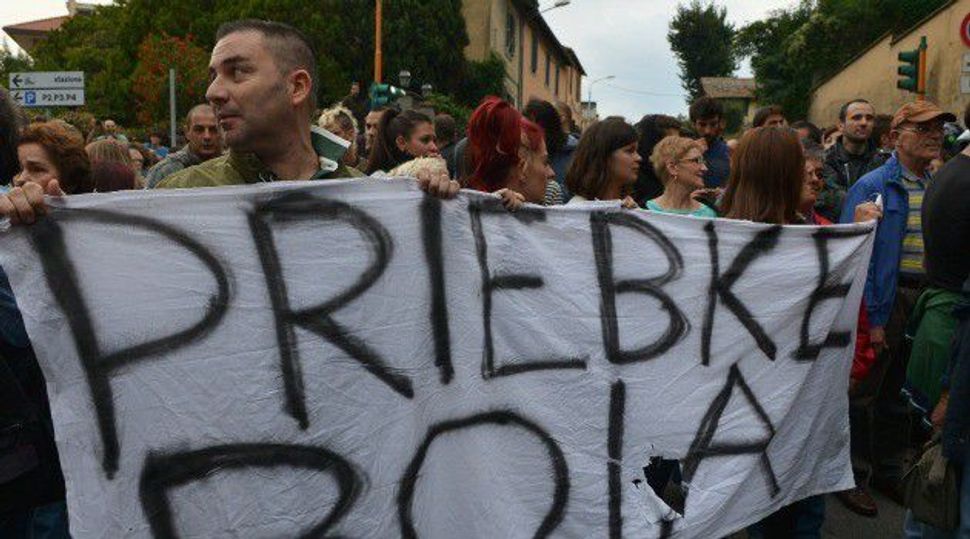 Not Again: A year after the death of Nazi criminal Erich Priebke sparked unrest in Rome, neo-Nazis held a public commemoration of his death. Image by getty images

The mayor of Rome condemned a public commemoration in the city for the late Nazi war criminal Erich Priebke.

Ignazio Marino called Saturday’s event downtown a “vulgar provocation” that “wounds the entire civic community and represents a real slap in the face to the city of Rome, which played a fundamental role in the Italian Resistance.”

Renzo Gattegna, the president of the Union of Italian Jewish Communities, thanked the mayor and called on all civic authorities to be vigilant against any similar episodes.

At the commemoration, which was organized by Priebke’s lawyer to mark the first anniversary of Priebke’s death at the age of 100, an improvised Mass was celebrated at a makeshift altar made of flowers and placards set up against a lamppost on the Sant’Angelo Bridge.

Posters reading “Ciao Captain” — Priebke was a Nazi SS captain — were plastered on some walls in Rome.

Priebke died on Oct. 11, 2013 while serving a life sentence under house arrest for his role in the 1944 massacre of 335 Romans, about 75 of them Jews, in the Ardeatine Caves south of Rome.