Women of Wall Push for Bat Mitzvahs at Western Wall 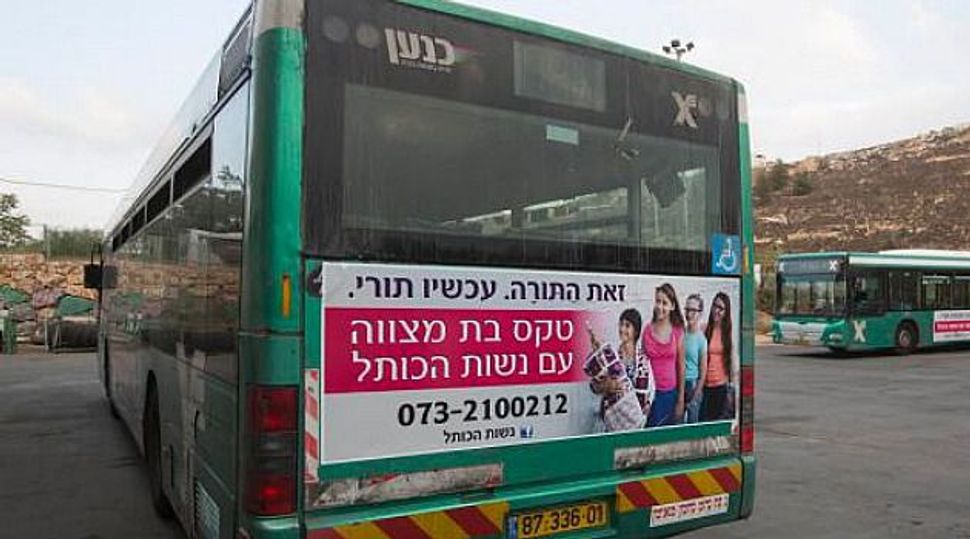 Us Too: Women of the Wall are pushing for bat mitzvahs at the Kotel with this new bus ad. Image by getty images

Women of the Wall launched an ad campaign on public buses in Jerusalem to promote bat mitzvah ceremonies for girls at the Western Wall.

The ads unveiled on Sunday evening feature Israeli girls ages 11 to 14 wearing a prayer shawl and holding a Torah scroll in front of the Western Wall. The ad reads in Hebrew: “Mom, I too want a bat mitzvah at the Kotel.”

The girls featured in the ads – including Ashira Abramowitz-Silverman, daughter of Yosef Abramowitz and Rabbi Susan Silverman – have either had a bat mitzvah with Women of the Wall or are planning one.

“The Western Wall Heritage Foundation, overseen by Rabbi Shmuel Rabinowitz, runs a lucrative and active industry of Bar Mitzvah celebrations for boys at the Western Wall. The foundation offers no such ceremony for girls; in fact Rabinowitz actively prevents any type of bat mitzvah ceremony for girls by refusing women access to Torah scrolls at the holy site,” the Women of the Wall said in a statement.

The public bus campaign is part of Women of the Wall’s efforts to be allowed to read from a Torah scroll in the women’s section of the Western Wall when they hold their monthly prayer service for Rosh Chodesh, the new month,

The Yerushalmit Movement recently began a running a bus advertisement featuring photos of women from Jerusalem pictured from the shoulders up. The women include a mix of secular, national religious, haredi and Arab, The campaign reportedly is the brainchild of Jerusalem city councilman Rachel Azaria, who was not permitted to run ads on buses during her campaign due to fear by the bus company that their buses would be damaged.

Several of the ads already have been vandalized in haredi Orthodox neighborhoods.

Women of Wall Push for Bat Mitzvahs at Western Wall