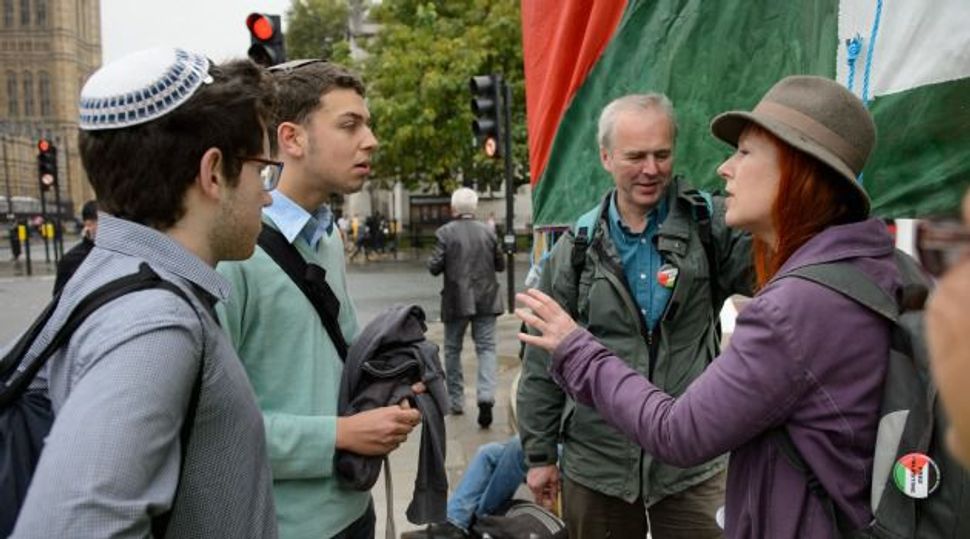 Yes and No: Supporters and opponents of measure to recognize Palestine as state argue outside British parliament. Image by getty images

The embassy’s staff posted the statement to on the embassy’s Facebook page on Monday night, after a majority of 274 lawmakers passed a motion which called on the government to “recognize the state of Palestine alongside the state of Israel as a contribution to securing a negotiated two-state solution.” Twelve lawmakers opposed the nonbinding motion while members of the cabinet of British Prime Minister David Cameron abstained.

In its reaction, the embassy wrote: “The route to Palestinian statehood runs through the negotiation room,” adding: “Premature international recognition sends a troubling message to the Palestinian leadership that they can evade the tough choices that both sides have to make, and actually undermines the chances to reach a real peace.”

Hanan Ashrawi, a senior official of the Palestine Liberation Organization and former Palestinian Authority cabinet minister, praised British parliament for the vote, which she described in a statement as sending “the right message to the British government and the rest of Europe” and creating “the right environment for the international community to grant the Palestinian people legal parity and rights.”

During deliberations ahead of the vote, a lawmaker for Cameron’s Conservative Party, Andrew Bridgen, was quoted as suggesting that because of “the power of the Jewish lobby in America, it falls to this country and to this House to be the good but critical friend that Israel needs.” The vote, he wrote, “just might lift that logjam on this very troubled area.”