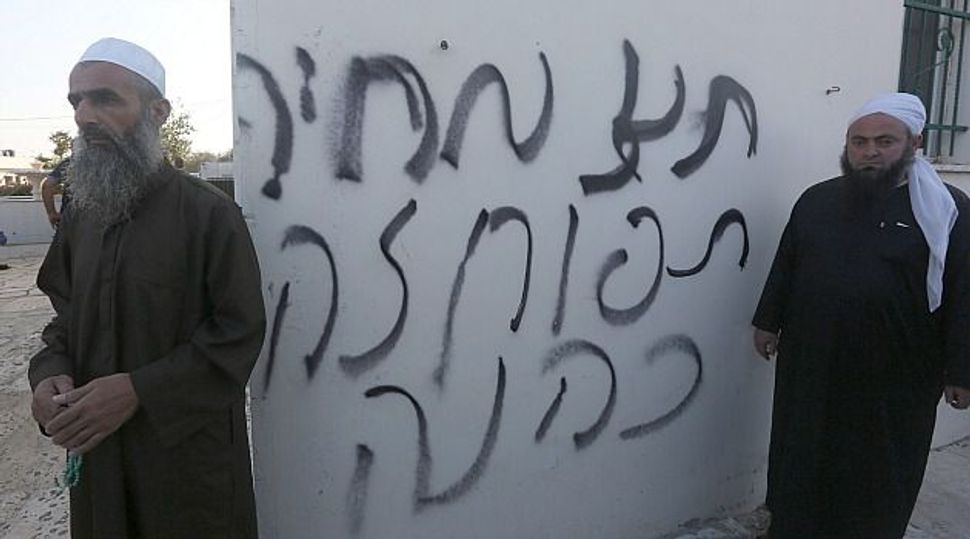 Hate Crime: Muslim clerics stand next to anti-Arab graffiti scrawled outside a West Bank mosque that was firebombed by Jewish exremists. Image by getty images

A mosque near Nablus was damaged in a fire and acts of vandalism that locals blamed on Jewish extremists.

The fire damaged the lower story of the mosque in the village of Akraba near the West Bank city, Army Radio reported Tuesday based on interviews with locals.

“The lower story was completely torched and someone spray-painted ‘price tag’ and ‘Kahane was right’ on the walls,” Zakaria Sada from Nablus told Army Radio. The graffiti was in Hebrew, he said.

Jewish extremists have used the “price tag” graffiti as their calling card in attacks on Arab-owned real-estate that they targeted as revenge for attacks on settlers and other Israelis. The slogan also featured in scenes of vandalism against Israel Defense Forces equipment.

Rabbi Meir Kahane was an Israeli far-right politician and a founder of the Jewish Defense League. He was murdered by an Egyptian terrorist in 1990 in New York City, the city of his birth.

Police are looking into reports of the incident in Akraba, Army Radio reported.

“Hate crime doesn’t begin to describe what I’m seeing,” Sadat said. “I think this a serious act of terrorism.”