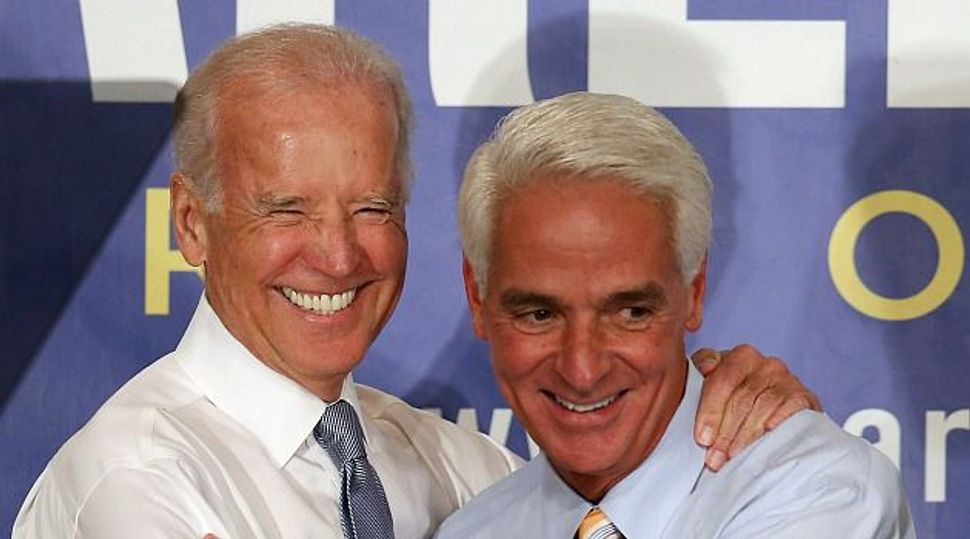 Five nights a week, Florida Democrats work the phones from a half-empty strip mall in this conservative Gulf Coast community, their tables cluttered with call sheets and cookie plates. “Charlie Crist for Governor” signs are taped to the walls beside framed photographs of Bill Clinton and John F. Kennedy.

Famously purple in presidential races, the nation’s largest swing state has been a bleak off-year battleground for Democrats in the two decades since the party last won a governor’s race. Now, Democrats are desperate to prove it still has a pulse in state elections.

“This is a Republican county,” concedes Pat Benson, 71, chairwoman of the Manatee County Democrats, who worked feverishly to register 16,000 Democrats for absentee ballots, beating the quota from state party leaders. “But if we can get our numbers up in each county, then we can win in the state.”

The party has no expectation of regaining the legislature this year and is fielding little-known candidates for other statewide offices. Its hopes ride almost entirely on Crist, the state’s former Republican governor who is running as a Democrat – and a ground campaign that seeks to replicate the voter outreach that twice carried President Barack Obama to victories in Florida.

Polls show a dead heat in one of the nation’s most closely watched races, in which Crist seeks to unseat his Republican successor, Rick Scott.

“The (state) Democratic Party has been basically moribund,” said Richard Scher, a political science professor at the University of Florida who formerly advised the Democratic club on the Gainesville campus.

“It’s hard to exaggerate,” he said. “Crist is the first breath of fresh air that they have been able to find.”

As the candidates battle for every last vote, the highlight of a debate on Wednesday night was not their opposing positions on issues such as medical marijuana, Cuba policy and raising the minimum wage but rather a squabble about a small fan at Crist’s podium, with Scott initially refusing to come out for the event on live TV.

The Democratic ground game is focused on the party’s base in densely populated South Florida and key micro-demographics in a state of nearly 12 million voters and 10 pricey TV markets.

In 2010, Scott won by 1 percent of the vote, or about 60,000 ballots, after the former hospital chain executive sank millions of his own money into the race.

“Florida is one of those states where people try to figure out, ‘What is the magic elixir?’ ” said Steven Schale, a Crist senior adviser who led Obama’s state campaigns. “There is never one thing. It is such a big, complicated place.”

Turnout could be the deciding factor.

He said Crist could win by turning out just 25 percent of the nearly half-million black voters who cast ballots for Obama but stayed home during the off-year governor’s race in 2010.

An uptick of a few percentage points among Spanish-speaking voters around Orlando, or white retirees, or in the blue-collar suburbs of the Tampa Bay swing region could also give the Democrat the edge he needs, Schale said.

Yet despite Crist’s three dozen field offices, with 100-plus staffers on the ground months earlier than in 2010, the campaign lacks the money to match Obama’s presence in every corner of the state.

“The Crist campaign is not Obama 3.0,” Schale said.

Nor can the Democrats out-raise Republicans, who dominate the state cabinet and both chambers of the legislature, in one the nation’s most expensive races.

“Anyone who wants to write off Florida Democrats could not be more wrong,” said Joshua Karp, a spokesman for the state party, pointing to the razor-thin margin in its 2010 defeat. “In the toughest Republican wave year in two generations, we came within a hair’s breadth of regaining the governor’s mansion.”

To stretch resources this election, the party is leaning on strong local races, such as the north Florida field operation built by the Gwen Graham for Congress campaign.

Yet Florida Republicans are also bolstering their efforts. Scott’s campaign said it has opened 49 field offices, knocked on 2 million doors and called more than 2.7 million voters.

Just the mention of Scott’s sophisticated operation rallies Democrats like Jamey Potts, 29, an Obama supporter now volunteering in her first governor’s race at the Crist field office in Miami’s Little Havana. She blames low Democratic turnout in 2010 for Scott’s victory.

“I was determined not to let that happen again,” she said.