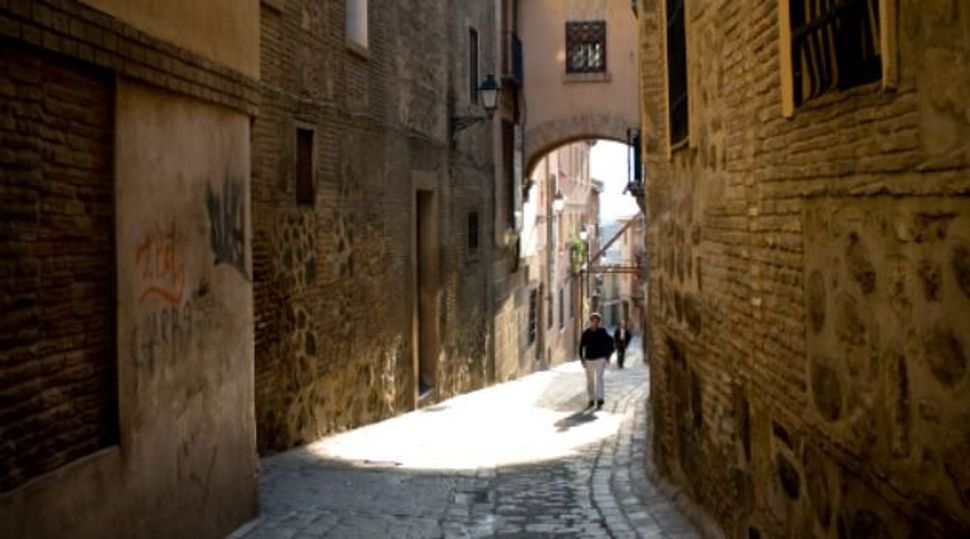 The Jewish Quarter of Toledo, Spain. Image by Getty Images

A Spanish pro-Israel group said the recent spraying of anti-Semitic graffiti in Toledo was the result of media coverage of the latest Gaza war and the Israeli-Palestinian conflict.

The Madrid-based Action and Communication on the Middle East lobby group, or ACOM, made the assertion over the weekend in connection with the Oct. 4 spray-painting of dozens of epithets on Jewish heritage sites in the Old City of Toledo. Two days later, police arrested a 32-year-old in connection with the graffiti, lavanguardia.com reported.

“Spanish media coverage of the last Gaza war and the Israeli conflict in general has encouraged such actions,” Daniel Fernandez of ACOM wrote in a statement on Friday. “Spanish public TV’s coverage, coupled with general ignorance in Spain about Israel, could serve to incite just about anyone.”

The reports about the Toledo vandalism did not name the suspect or indicate whether the actions were believed to be connected to Israel.

One of the epithets was spray-painted on the foot of a statue of Samuel Levi Abulafia, who in the 14th century founded Toledo’s El Transito Synagogue. It read “No Jews!” and featured dollar signs. Abulafia, or Samuel Levi, served as treasurer under Peter I, the King of Castile, until his death in 1360 in Seville, where he was tortured on trumped-up charges of treason.

In July, the Jewish community of Madrid said it would sue a celebrated Spanish author, Antonio Gala, who in a July 23 Op-Ed in the El Mundo daily cited Israel’s attacks in Gaza to justify the mass expulsion of Spanish Jewry during the 15th and 16th centuries, among other atrocities committed against Jews.

Fewer than 100 Jews live in Toledo, which prior to the Spanish Inquisition was home to one of the Iberian Peninsula’s largest Jewish populations.