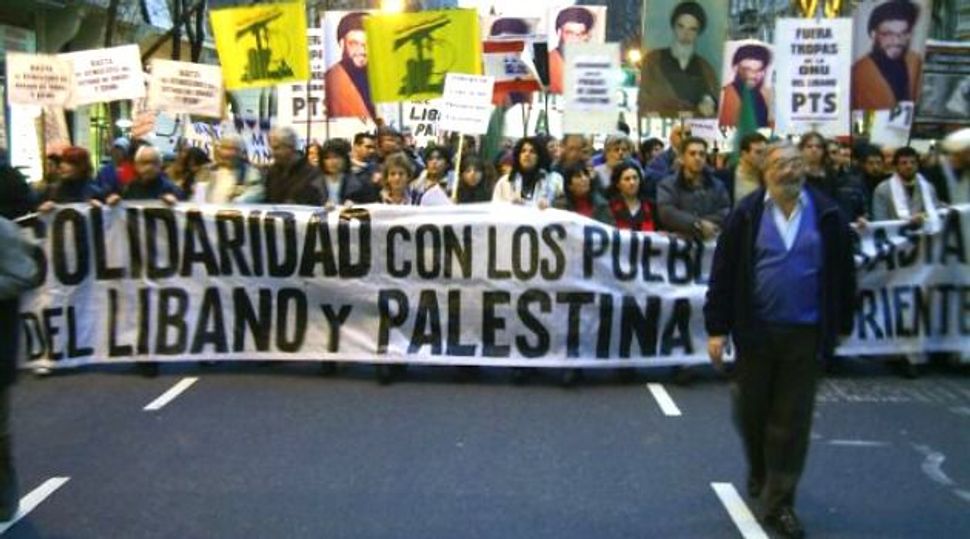 The Argentine far-left group Quebracho demonstrates against the State of Israel. Image by Wikipedia

The leader of the Argentine far-left group Quebracho was sentenced to 4 1/2 years in prison for threatening a Jewish community demonstration.

Fernando Esteche was sentenced Friday after pleading guilty that day to charges of intimidation and violence against the 2006 protest in front of the Iranian Embassy in Buenos Aires.

Local Jewish groups said their rally was “against terrorism and in favor of peace.” The Quebracho group held a counterdemonstration supporting Hezbollah and against the State of Israel in reaction to the Israel-Lebanon conflict at the time. Esteche said he was protesting Israel’s “massacre against the Palestinians.”

The day of the demonstration, Esteche told the Argentine media that “we come here to repel the fanatics and to prevent the same type of aggression and arrogance that they carry in the Middle East and they want to do here with fundamentalist youth in Argentina.”

Esteche, who serves on the faculty at the National University of La Plata’s journalism school, has spoken publicly against Israel in demonstrations and in the media.

He was sentenced in a summary trial of two criminal cases involving protests and intimidation: the counterdemonstration at the Iranian Embassy and another against the International Monetary Fund in 2004.

After been threatened by “sticks and insults,” the Jewish demonstrators were forced to leave the site of their August 2006 rally.