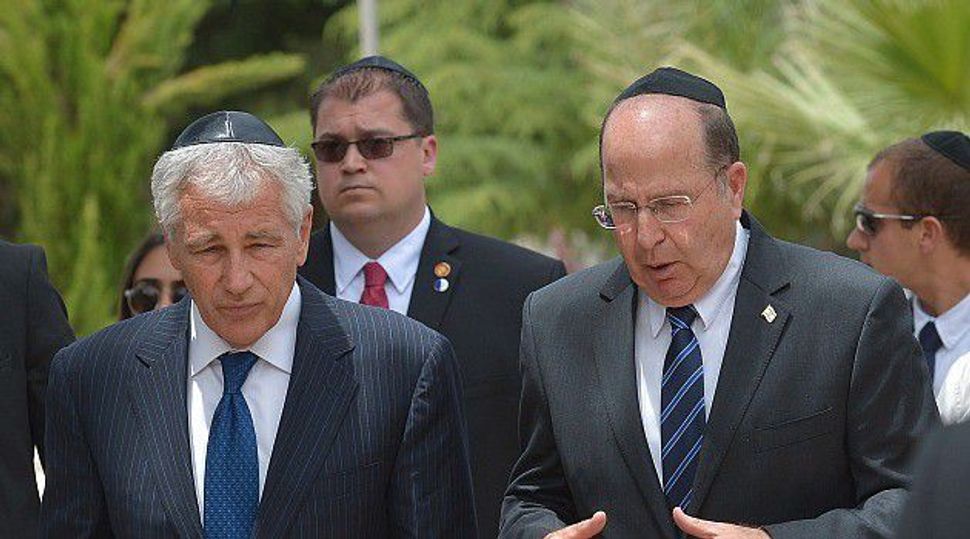 Israeli Defense Minister Moshe Yaalon left for a five-day U.S. trip amid criticism by Israeli ministers of remarks made by Secretary of State John Kerry.

Yaalon headed to the United States on Saturday night, two days after Kerry linked the rise of ISIS terrorism to the lack of progress in the Israeli-Palestinian conflict at a State Department event marking the Muslim holiday Eid al-Adha.

“There wasn’t a leader I met … who didn’t raise with me spontaneously the need to try to get peace between Israel and the Palestinians because it was a cause of recruitment and of street anger and agitation,” Kerry said.

In the U.S., Yaalon is scheduled to meet with his U.S. counterpart, Chuck Hagel, and other U.S. security officials, to discuss regional issues such as Iran’s nuclear program and the Islamic State. It is his first U.S. visit since Israel’s 50-day operation in Gaza this summer.

Yaalon also is expected to meet in New York with U.N. Secretary-General Ban Ki-moon, as well as the U.S. ambassador to the United Nations, Samantha Power, and New York Mayor Bill de Blasio. He is scheduled to attend official ceremonies at Ground Zero in New York and at Arlington National Cemetery, and to meet with Jewish community leaders.

“The relations between the U.S. and Israel are based on common interests and shared values, and those should not be overshadowed by any disagreement of any sort,” Yaalon said in a statement before he left Israel.

On Friday, some Israeli ministers rapped Kerry for his remarks.

“Even when a British Muslim beheads a British Christian, someone will always blame the Jew,” Economy Minister Naftali Bennett, head of the right-wing Jewish Home party, responded in a Facebook post that linked to a report of Kerry’s remarks.

On Saturday night, Bennett posted, “The notion regarding the centrality of the Israeli-Palestinian conflict is not true and puts Israel at risk.” He listed several examples.

Foreign Minister Avigdor Liberman on Saturday night accused Bennett of using Kerry’s remarks for his own political benefit. “There can be differences of opinion between friends, but there needn’t be attacks,” Liberman said in an interview on Israel Channel 2.

“What he said was that during his travels to build a coalition against the Islamic State, he was told that should the Israeli-Palestinian conflict be resolved, the Middle East would be a better place,” State Department spokeswoman Marie Harf said. “His comments were distorted for political gains. He did not make that connection.”

But PLO secretary general Yasser Abed Rabbo told the French news agency AFP on Saturday night, in response to the Kerry statement, that “linking the fight against terrorism and the end of the Israeli occupation is a strategic position that we support.”