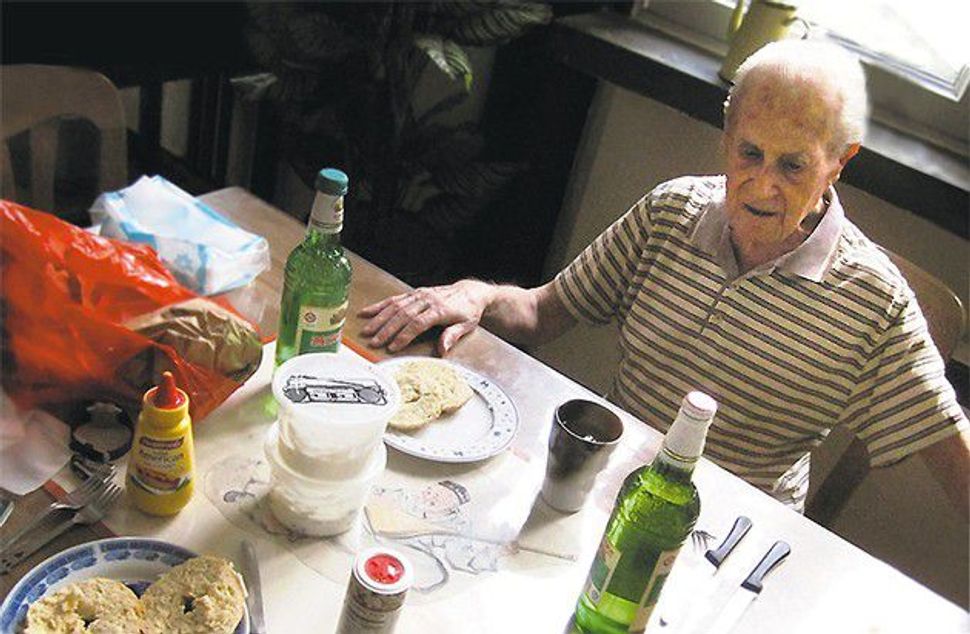 Bagels in Beijing: Sidney Shapiro enjoys a beer and some shmear. Image by NICK FRISCH

Sidney Shapiro, a famed U.S.-born translator who was one of the few Westerners to gain Chinese citizenship and become a member of a high-level parliamentary body, died on the weekend in Beijing, his granddaughter said. He was 98.

Shapiro was born in New York in 1915 and first came to China in 1947, having been selected by the U.S. army to learn Chinese during World War Two.

He married a Chinese actress who was a supporter of the Communist Party, which at the time was fighting a civil war with the Nationalists, and did not visit the United States again until 1971.

He remained in China after the Communist revolution in 1949, when many Western foreigners left, and became a Chinese citizen in 1963 – an honor reserved only for a select few foreigners judged to have performed special services for China.

He was best known for his English translations of the Chinese classic novel “Outlaws of the Marsh,” as well as works by the more modern authors Ba Jin and Mao Dun.

“Translators like us have the responsibility to let the world know that China has the richest tradition of virtue,” he told the official Xinhua news agency in 2010, after being bestowed a lifetime achievement award by the Translators Association of China.

Better known in China by his Chinese name, Sha Boli, he was appointed in 1983 to the Chinese People’s Political Consultative Conference, a largely ceremonial but high profile advisory body to parliament.

He lost none of his fire in the later part of his life, lambasting the United States in 2006 following one of the State Department’s regular criticisms of China’s human rights.

“Democracy in America, which was won by the public through long-time struggle, had started going downhill in the 20th century,” Xinhua quoted him as saying on the sidelines of that year’s annual meeting of parliament.

“In the States today, the intelligence agencies have even got the power to tap citizens’ phone calls and inquire what books a person is borrowing from the library,” he said.

However, he never joined the Communist Party, unlike some other Westerners who were equally committed to the cause of modern China.

“I was still too much of a maverick, reluctant to accept any organizational strictures or discipline. But I had the greatest respect for the Chinese party, and fully supported its principles and goals,” he wrote in his autobiography “I Chose China.”

“As his granddaughter, I am blessed with so many memories – his quirky humor, wonderful stories, great taste in music, appreciation for old movies, his American-Jewish heritage, energetic debates, love of new technology and so much more,” she wrote.