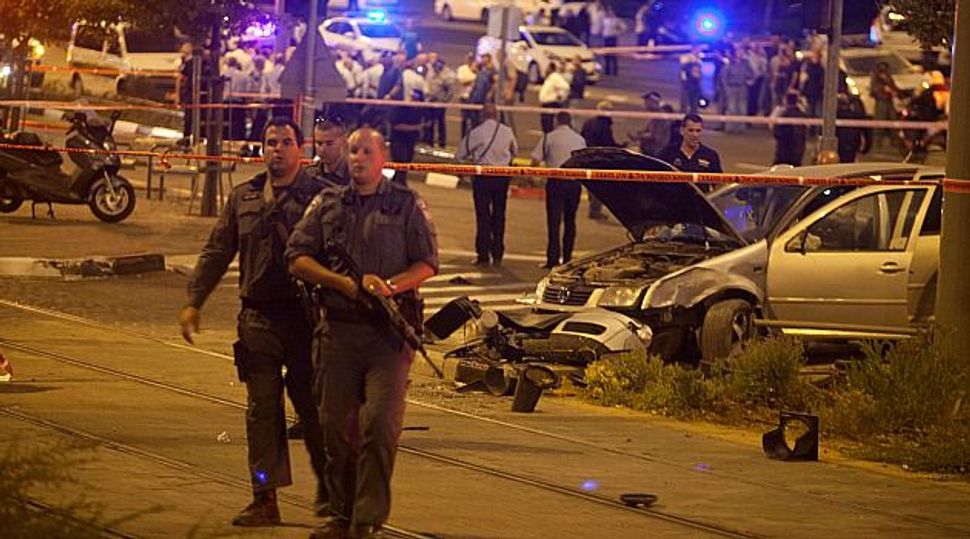 A baby died and eight other people were hurt when a Palestinian man slammed his car into pedestrians at a Jerusalem light railway stop, then police shot the driver as he fled, police and a hospital official said.

A hospital official said the driver later died of his injuries.

Police described the actions of the driver identified as Adbel-Rahman Shaloudi, 21, a Palestinian man of East Jerusalem, as a “terrorist attack,” and poured forces into the area to confront one of the worst spikes in violence in weeks in a city at the heart of the Israeli, Palestinian conflict.

In Washington, the U.S. State Department said the baby was “reportedly an American citizen,” but did not elaborate.

Video footage aired on Israeli media showed Shaloudi lying on the ground and a plainclothes officer pointing a pistol at him.

Two of the injured pedestrians were in serious condition, police said. Israeli and social media showed photographs of the baby, three months old, struck while in a stroller, swathed in pink as she was carried from the scene. She was buried on Wednesday night.

“We can confirm that this was a terrorist attack. The driver … is a resident of Silwan and has a terrorist background. He has served time in jail for terror activity,” police spokesman Micky Rosenfeld said.

Silwan, a neighborhood bordering on Jerusalem’s old walled city, has been a focal point of violence in past weeks with Palestinians protesting against Israeli settlers moving into houses in the predominantly Palestinian-populated district.

After nightfall, Silwan residents clashed with police, who responded to rocks and petrol bombs with stun grenades. Police clashed with stone-throwing protesters elsewhere in the city as well, where one person was injured and two others were arrested.

The pedestrians were struck along a main north-south route leading into the center of Jerusalem, close to the national police headquarters and one of the city’s main hospitals at Mount Scopus.

Footage of the incident showed the car veered to the right from the traffic lane and hurtled at speed into a light railway platform, hitting pedestrians before coming to a halt apparently after flattening a signpost.

No Palestinian group claimed responsibility for the attack.

“The United States condemns in the strongest possible terms today’s terrorist attack in Jerusalem,” State Department spokeswoman Jen Psaki said in a statement, offering condolences to the “family of the baby, reportedly an American citizen.”

“We urge all sides to maintain calm and avoid escalating tensions in the wake of this incident,” Psaki said.

Israeli Prime Minister Benjamin Netanyahu blamed Palestinian President Mahmoud Abbas and the Islamist Hamas movement, with whom Abbas has forged a unity government deal, for the attack. Netanyahu also accused Abbas of himself inciting violence, and he ordered police to heighten their presence in Jerusalem.

“This is the way in which Abu Mazen’s (Abbas’s) partners in government operate, the same Abu Mazen who just days ago incited to harm Jews in Jerusalem,” a statement from Netanyahu’s office added.

Repeated damage caused by Palestinians has put a third of its carriages out of commission on the Jerusalem light railway, which links Arab and Jewish neighborhoods and was once hailed by Israeli authorities as a symbol of coexistence.

The tensions have underscored deepening divisions in the Israeli-occupied part of the city that Israel claims as its “indivisible capital.”

Tensions have been high in Jerusalem since events leading up to a 50-day Gaza war that ended in August and the killing of a Palestinian teen in the city.

Three Israelis have been charged in the killing case on suspicion they had sought to avenge the June slayings of three abducted Israeli youths in the occupied West Bank.

The last deadly incidents in Jerusalem took place in August when a Palestinian killed an Israeli and overturned a bus with a construction vehicle and a gunman wounded a soldier in attacks that appeared to be a backlash against the Gaza war.

Israel captured East Jerusalem along with Gaza and the West Bank in the 1967 Six Day War. It annexed the city shortly afterwards and passed a law in 1980 that declared all of Jerusalem its capital, a move not recognized internationally.