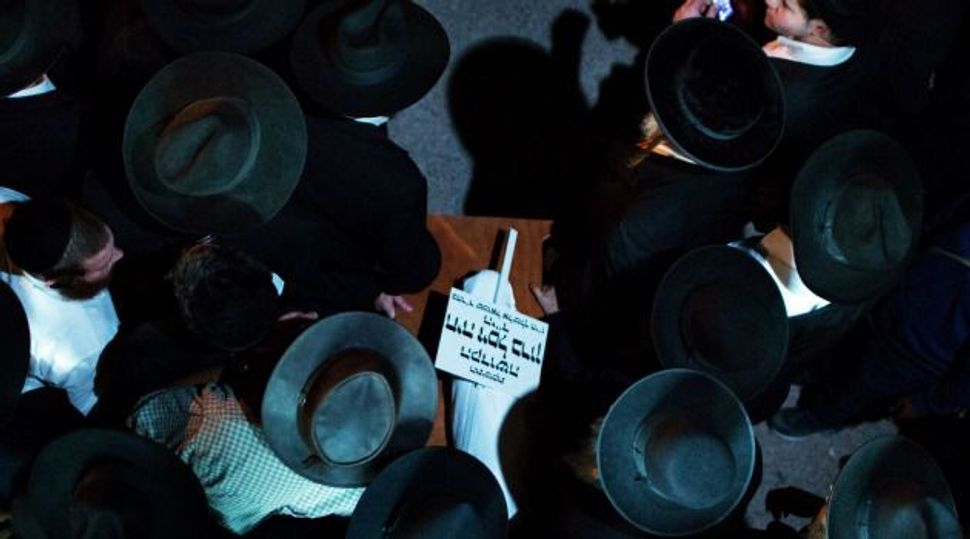 ‘Pure Soul’ Ultra-Orthodox mourners gather at funeral for Chaya Zissel Braun, the infant who was killed in an attack on Jerusalem’s light rail train system. Image by getty images

That’s the message a tearful grandfather has taken from the murder of his 3-month-old granddaughter in a suspected terror attack in Jerusalem on Wednesday.

Chaya Zissel Braun died when a Palestinian man rammed his car into a crowd of people waiting to board the Jerusalem light rail. Seven people also were injured in the attack.

Chaya’s grandfather, Shimshon Halperin, called Chaya a “pure soul” who “didn’t do anything bad to anybody,” but said he and her parents have accepted “with love” what he sees as God’s decree.

“We believe that from the whole wide world, from the land of Israel, from Jerusalem, she was chosen to be the public sacrifice,” he told a group of reporters on Thursday night in Jerusalem, alluding to sacrifices given in the Ancient Israelites’ Temple. “God gives, God takes away.”

Standing in a dim courtyard in a haredi Orthodox neighborhood of Jerusalem, outside the apartment where the family was sitting shiva, Halperin said that his daughter and her husband had wanted a baby for years. He explained that Chaya’s middle name, Zissel, comes from the Yiddish word for “sweet,” and teared up describing how his daughter would rock Chaya.

“You can take for granted the way a grandfather feels for a granddaughter that has just been murdered,” he said. “You can see it.”

Chaya and her parents were returning from the baby’s first trip to the Western Wall when the car rammed into the crowd. Halperin said Chaya was flung in the air and landed on the pavement.

He thanked the soldiers, policemen and hospital employees who tried to save Chaya’s life.

For Halperin, Chaya’s death is a sign that Jews should rededicate themselves to Torah, good deeds and Jewish commandments. He said he hopes, in Chaya’s merit, that more Jews observe Shabbat and imbue their lives with more meaning.

“God is trying to wake us up,” he said. “To take [something] upon ourselves, to try to get better, to try to do a good deed, to behave to each other better.”