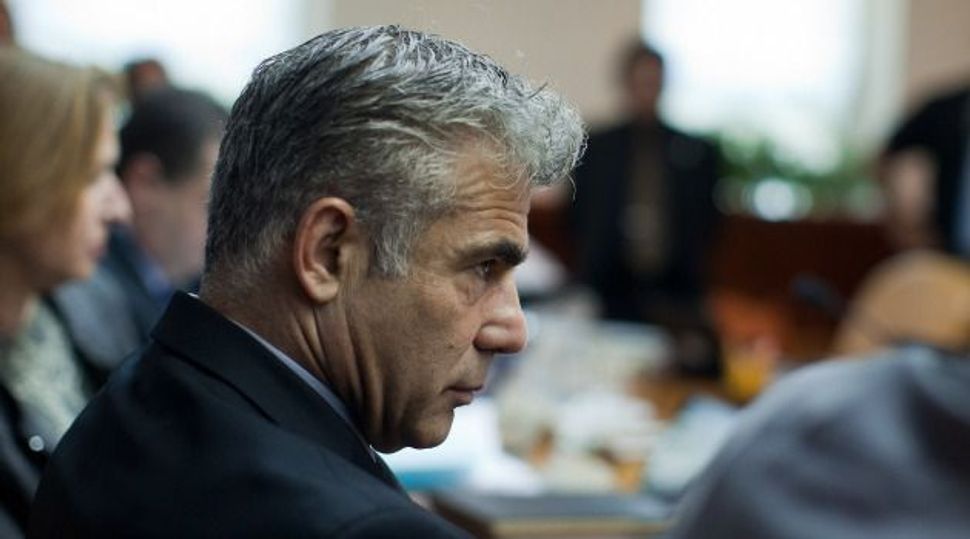 Lapid made his remarks Wednesday during a ministerial meeting at the Prime Minister’s Office on improving West Bank infrastructure. He was responding to reports that Prime Minister Benjamin Netanyahu approved planning for at least 1,000 new housing units in Jewish neighborhoods of eastern Jerusalem, and that the government was planning to build 2,000 more housing units in West Bank settlement blocs.

“I won’t facilitate money being transferred to isolated settlements which needs to go Kiryat Shemona in the North and Beersheba in the South, especially at this time when it causes real harm to Israel,” said Lapid, who heads the centrist Yesh Atid party, the largest coalition partner in the Netanyahu government.

“I support building in Jerusalem; it’s our capital city and we will support the improvement of infrastructure in the major settlement blocs as part of the natural growth, but as with everything there is a matter of timing.”

Lapid also alluded to an article published Tuesday in The Atlantic magazine in which an unnamed U.S. official criticized Netanyahu as a coward and confirmed the poor relationship between the Israeli leader and President Obama.

“I said only a few days ago that there is a real crisis in the relations and it needs to be dealt with responsibility,” Lapid said.”Senior officials at the White House and in our government need to tackle the crisis behind the scenes because the relations between the two countries are of strategic importance and based upon a deep friendship.”