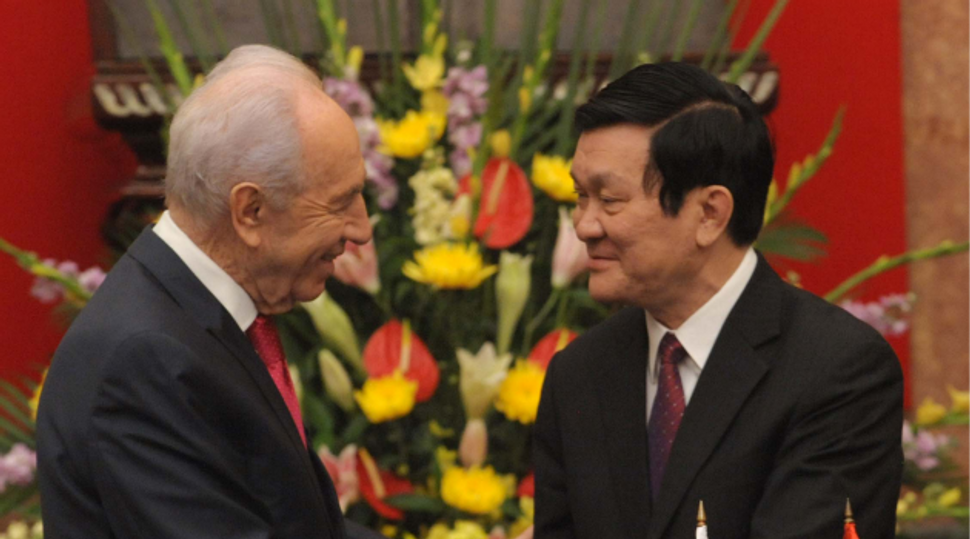 Former Israeli President Shimon Peres on a visit to Vietnam in 2011. Image by Getty Images

The five-day festival organized by Israel’s embassy opens Saturday at the National Cinema Centre in Hanoi, moving on Nov. 6 to the BHD Star Cineplex ICON68 in Ho Chi Minh City, the embassy announced on its Facebook page earlier this week.

According to Israeli ambassador Meirav Eilon-Shahar, the festival will introduce to Vietnamese audiences the films “Foreign Letters,” “Broken Wings,” “The Matchmaker,” “Someone to Run With” and “Something Sweet”.

The movies will connect the two nations’ citizens and boost understanding of Israel, the news site vietnamnet.vn quoted Eilon-Shahar as saying.

Among other activities marking the 20 years is the Nov. 7 launching at Hanoi’s General Science Library of a Vietnamese-language translation of the 2012 book “The Chosen Few: How Education Shaped Jewish History,” by Maristella Botticini and Zvi Eckstein.

Another event is a Facebook-based quiz in which participants will be asked to answer five questions about a different photograph every week, for six weeks. The winner of the competition, which is set to begin Monday, will receive an iPhone 6 from the embassy. Other prizes include a large, framed map of Israel and a book about the Jewish state.

Trade between Israel and Vietnam in the first eight months of 2014 reached $624.9 million, a 60 percent increase over the corresponding period last year, according to data released earlier this month by the embassy.