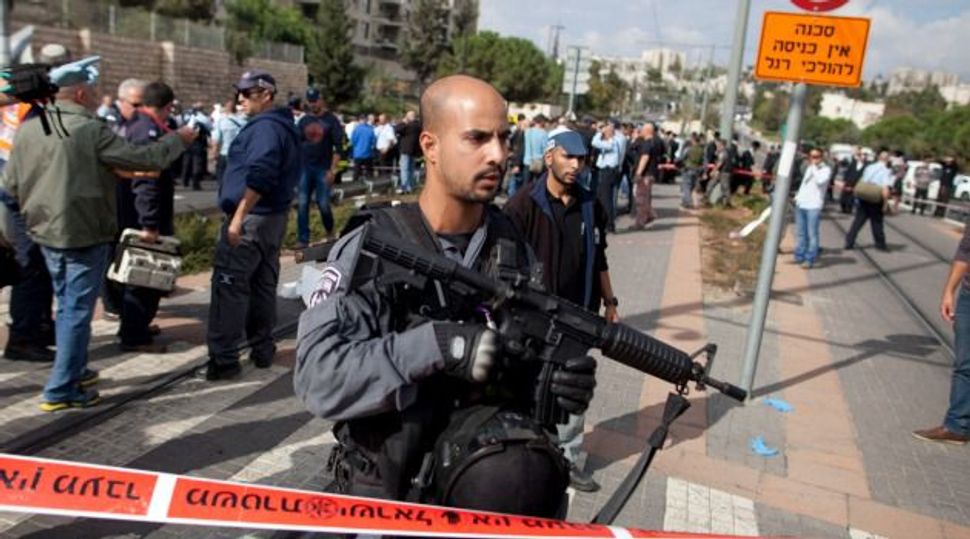 Israeli soldier guards scene of a suspected terror attack in which a Palestinian driver rammed into pedestrians at a Jerusalem light rail station. Image by gettty images

A Palestinian rammed his car into pedestrians in central Jerusalem on Wednesday in the second attack of its kind in two weeks, killing one person and fueling concerns of another Palestinian uprising.

The driver, who was shot dead by police, was identified by an Israeli security official as Ibrahim Akari from East Jerusalem, and the militant Islamist group Hamas claimed responsibility for what it termed “the heroic running-over operation.”

With tensions soaring in Jerusalem over access to a compound housing Islam’s third-holiest site, where biblical Jewish temples once stood, Jordan denounced what it described as Israel’s violations in the city and said it was recalling its ambassador from Tel Aviv.

A Facebook page that appeared to be Akari’s included praise for a Palestinian shooting a week ago that wounded an Israeli activist who advocates lifting a de facto Israeli ban on Jewish prayer at the sensitive site revered by Jews as Temple Mount and by Muslims as the Noble Sanctuary.

Palestinians accuse Israel of trying to change the delicate status quo at the compound, which houses al-Aqsa mosque and the Dome of the Rock shrine, and have mounted daily stone-throwing protests at the site.

Jordan oversees religious administration at the site. Its state news agency said the decision to withdraw the ambassador was taken “in protest at the increasing and unprecedented Israeli escalation in the Noble Sanctuary.”

The move comes days after the two countries marked the 20th anniversary of a landmark peace accord.

The road rampage was the second in two weeks in Jerusalem, and the target was again a stop along its light railway, which links Arab and Jewish areas in what Israel has portrayed as a symbol of unity in its contested capital.

Police and witnesses said the driver slammed his white van into three paramilitary border policemen crossing a street straddling a Palestinian neighborhood and an ultra-Orthodox Jewish area and then into people at the railway stop.

Crashing to a halt at a nearby junction, he emerged from the van and began striking at pedestrians with a metal pipe.

“A border policeman, taking the initiative, drew his weapon and eliminated the terrorist,” Jerusalem Mayor Nir Barkat told reporters at the scene.

Medical officials said one person later died in hospital and about a dozen people were injured.

In Gaza, Fawzi Barhoum, a Hamas spokesman, said the attack was a response to “continued Zionist crimes” against al-Aqsa.

On Oct. 22, a Palestinian motorist drove through a nearby train station, killing a baby girl and a woman before he was shot dead by Israeli police.

Violence has been mounting in Jerusalem since a Palestinian teenager was burned alive in July by accused Jewish attackers avenging the killing of three Israeli youngsters in the occupied West Bank.

There have been daily Palestinian street protests in East Jerusalem, raising Israeli concern of a new Intifada, or uprising, after the collapse of U.S.-brokered statehood talks last April and nearly a decade after a previous revolt ended.

Hours before the road attack, Israeli security forces hurling stun grenades clashed with Palestinian stone-throwers at al-Aqsa mosque – a confrontation that has played out frequently over the past several weeks.